The Crisis in the AK Party-MHP Alliance

It is too early to talk about the future of the People’s Alliance. However, it is fair to state that unless the conditions that had formed the Alliance change, it will maintain its existence with periodical fluctuations. 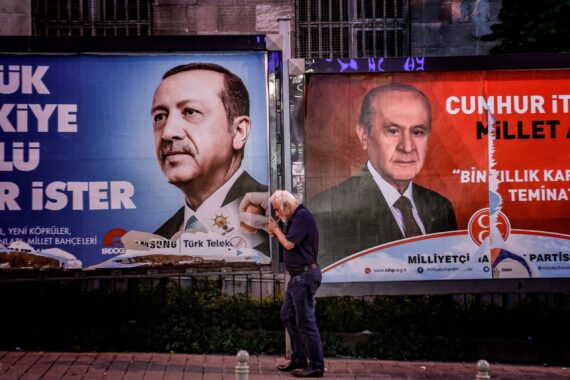 A pedestrian walks past in banners with portraits of Turrkish President Recep Tayyip Erdogan (L) and the leader of Nationalist Movement Party (MHP) Devlet Bahceli in Istanbul on June 19, 2018. Getty Images

The so-called People’s Alliance between the AK Party and the MHP has been in disarray. Relations between the two parties took a downturn with the disagreement on a couple of issues, such as issuing a general pardon and the Council of State’s decision to repel the earlier arrangement on the student oath. The MHP has been pressing hard for issuing a general pardon for convicts in the run-up to local elections at the end of March. The AK Party finds it inconvenient and refutes it for it might cause a loss of confidence in the public towards the law. Yet the MHP has not taken a step back and vowed to bring the issue to the Parliament.

The Council of State’s decision to repel the arrangement on the student oath and the disagreement between the AK Party and MHP on this issue has only caused further damage to the Alliance. The student oath, which was held obligatory for elementary school students to chant every morning before classes since 1933, had been removed in 2013 on account of ethnic discrimination against non-Turkish groups in the country. The decision was also taken on the basis that it carried a high dosage of ultra-secular nationalist ideology and that it may pedagogically harm students at such an early age.

The nationalist MHP has supported the Council’s decision to repel the arrangement by claiming that removing it was one of the notorious political mistakes made in the process of the democratic opening, which basically relaxed the state’s ideological control on ethnic and religious minorities in the country. The AK Party maintained its earlier reformist position on the matter and blamed the Council of meddling within the sphere of the executive. The party also warned the Council that the country could not be brought back to the times which were characterized by bureaucratic tutelage.

The uproar on the student oath case between the two political parties openly disclosed their ideological distance. This led to public debates, some claiming that the People’s Alliance might come to an end due to the noted notable ideological difference. The native-national ideological basis shared by the two parties might collapse under growing pressure and the parties may begin to move in different ideological directions defined by separate interests.

The Alliance was officially established in May this year in the run up to the critical June 24 general elections. Yet in an unofficial form the Alliance has been with us since the unsuccessful coup attempt by Gulenist army officers on 15 July, 2016. The two political parties vowed to fight against internal and external threats (including the PKK and DAESH) and to maintain the country’s survival. Besides, in the official document of the Alliance, the two parties declared that they will work together to institutionalize and consolidate the presidential system after the June 24 elections. In addition to this, the document states that they will pursue a strategy of making Turkey not only a regional, but a global power.

Some argue that despite apparent ideological differences the Alliance will maintain itself since the causes that initially led to its formation still stand true. Thus, the two parties might have taken a strategic decision to depart temporarily in the upcoming local elections in order to increase the chances of success of the Alliance in the future.

Some others contend that in both parties tension is growing among members out of fear of identity loss. Indeed, this might alarm party members since the presidential system forces the political parties into a two-party system. The temporary alliance might turn into unification in the long run. Similar tensions and concerns can also be observed in the opposition parties.

It is too early to talk about the future of the People’s Alliance. However, it is fair to state that unless the conditions that had formed the Alliance change, it will maintain its existence with periodical fluctuations.