Capitol Hill Attack Is the Logical Endgame of Trumpism

Unaccountability breeds impudence. It is an urgent moral necessity to hold accountable all those who incited the coup attempt through their mendacity and vitriol. 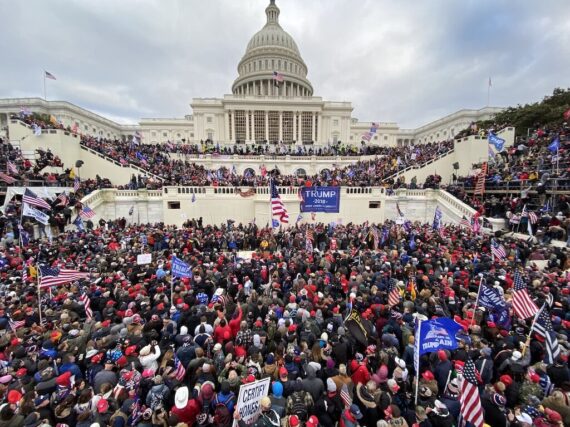 Pro-Trump rioters stormed the US Capitol on January 06, 2021, as lawmakers were set to sign off Wednesday on President-elect Joe Biden's electoral victory. Photo by Tayfun Coskun, Anadolu Images

Last week, Donald Trump’s unhinged term as president came to a terrifying crescendo as he incited an insurrectionary mob of thousands of cult-like devotees to storm the Capitol in a last-ditch bid to overturn the will of the people and prevent Congress from ceremonially counting the Electoral College votes which officially make Joe Biden the next president.

Trump, who entered office pledging to end “American carnage” will unceremoniously depart the White House next week for his contrived ostentation of Mar-A-Lago, leaving in his wake the most carnage done to democratic institutions in the United States since the Civil War.

Most aspiring fascists plan their coups behind closed doors. Not so with the bombastic, delusional, and egotistical Trump, who, even before he lost the November 3 election by more than seven million votes, declared that he would not accept the results if he lost, and told a white supremacist militia to “stand by” for further instructions.

After the magnitude of his loss was evident, Trump claimed without a shred of credible evidence that the vote was rigged, and mounted a farcical attempted legal coup, which was epitomized by his deranged lawyer Rudy Giuliani hosting a bizarre press conference at Four Seasons Total Landscaping in Philadelphia, a family-owned business wedged between a sex shop and crematorium. In a flurry of nearly 100 lawsuits, Trump’s attempts were laughed out of court as being meritless even by some judges who were appointed by Trump. 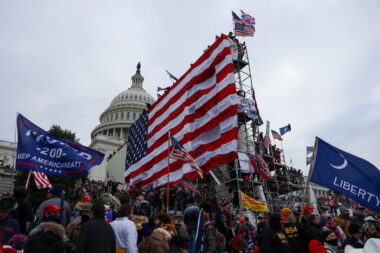 Pro-Trump rioters stormed the US Capitol on January 06, 2021 as lawmakers were set to sign off Wednesday on President-elect Joe Biden's electoral victory. Photo by Tayfun Coskun, Anadolu Images

Having failed to overthrow democracy in the courts, Trump egged on his rabble of die-hard supporters to come to Washington to “stop the steal” by themselves. The more ridiculous of them stormed the Capitol bare-shirted, wearing furs and horns and with faces painted with the American flag, in a preposterous coup cosplay get up.

The more deadly serious of them planted pipe bombs, packed their trucks with explosives, erected gallows on the Capitol, killed a Capitol Hill police office with a fire extinguisher, packed zip ties to take hostages, and sought to hunt down Vice President Mike Pence and execute him for refusing to go along with Trump’s coup attempt.

The mob of enraged fanatics flew flags bearing Trump’s name alongside banners proclaiming that Jesus saves. Others charged the Capitol with Confederate flags unfurled, mere weeks after Confederate General Robert E. Lee’s statue was removed from the Capitol in the midst of a long-delayed national racial justice reckoning. Still others proudly displayed Nazi-inspired shirts invoking the horrors of Auschwitz. A more vile concatenation of white supremacy and Christian nationalism is difficult to conjure.

Finally, after four excruciatingly long years of an unceasing torrent of white supremacy, misogyny, high crimes and misdemeanors, fatal incompetence and dereliction, lies and pomposity, many Republicans have had enough of Trumpism. One of Trump’s erstwhile most stalwart allies, Sen. Lindsey Graham (R-SC), abandoned the sinking ship with a galling, self-serving, revisionist speech on the Senate floor. And a PBS NewsHour/Marist poll found 88 percent of people in the United States opposed the insurrection at the Capitol.

However, even after the coup attempt, 7 Republican Senators and 138 Representatives still voted to overturn the election results. And the same PBS NewsHour/Marist poll found that 8 percent of people approved of the attack, translating into an astonishing 26 million people, most of whom are presumably heavily armed and who would presumably be ready to march with Trump to his fascist endgame. 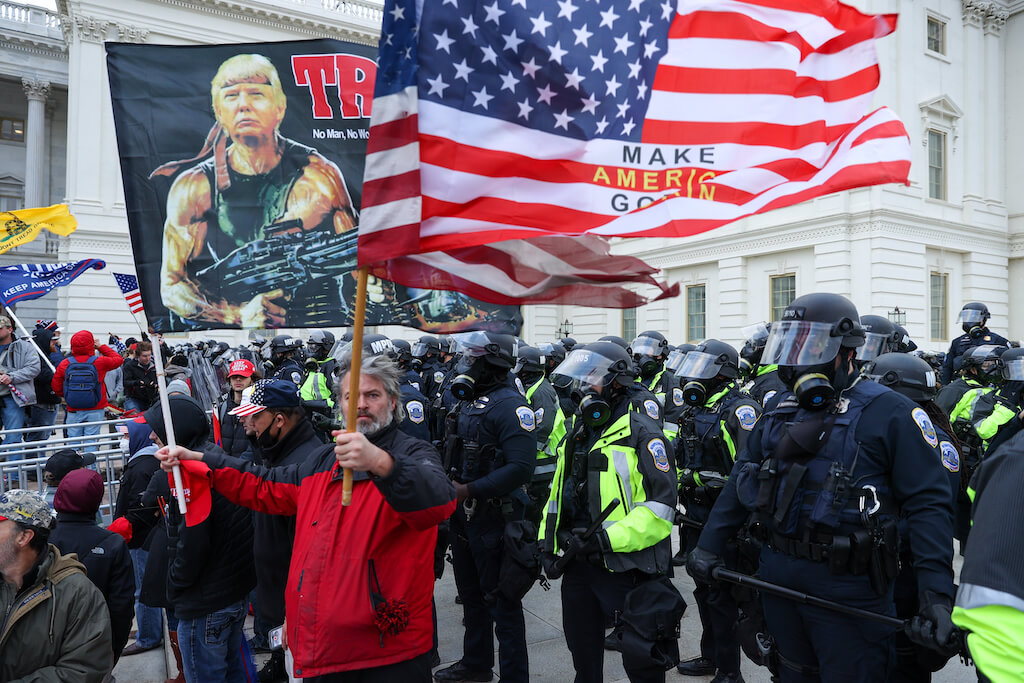 Since last week’s coup attempt, many Republicans have been quick to advocate for unity and reconciliation, and dispense with accountability and justice. Rounding up the foot soldiers of the riot is insufficient. U.S. law on insurrection is clear: “Whoever incites, sets on foot, assists, or engages in any rebellion or insurrection against the authority of the United States or the laws thereof, or gives aid or comfort thereto, shall be fined under this title or imprisoned not more than ten years, or both; and shall be incapable of holding any office under the United States.”

Fascism and white supremacy must be uprooted, not appeased and emboldened. For everyone from Trump–who urged his supporters to “fight like Hell” before instructing them to storm Congress–all the way down the line to the other incendiary inciters like Giuliani (“trial by combat”), Donald Trump, Jr. (“we’re coming for you”), and Rep. Mo Brooks (R-AL) (“taking down names and kicking ass”), prosecution and imprisonment for inciting insurrection and permanent disqualification from holding public office is an apt consequence.

Fascism and white supremacy must be uprooted, not appeased and emboldened.

But this should only be the start. As provided for in the constitution, Congress must expel the ringleaders of the attempt to subvert the Electoral College results such as Sen. Ted Cruz (R-TX) and Sen. Josh Hawley (R-MO), and, at the very least, censure every Member of Congress who connived in the plot.

Read: “Trumpism was an aberrational swing of the political pendulum to the extreme right”

This week, Congress began its accountability process by passing a resolution yesterday calling on Mike Pence to invoke the 25th Amendment and immediately remove Trump from office. The treacly Pence ruled out that option before the vote, so the House will vote today on articles of impeachment, making Trump the first president to be impeached twice.

Senate Majority Leader Mitch McConnell (R-KY), who retains his position until Georgia’s Democratic Senators-Elect Raphael Warnock and Jon Ossoff are sworn into office and Vice President-Elect Kamala Harris is inaugurated as the tie-breaking vote, is a wildcard. Yesterday, he unexpectedly came out in favor of impeachment and if he supports convicting Trump either before or after he leaves office, he could bring along enough of his Republican colleagues to muster the 2/3 needed vote.

These accountability procedures are necessary even if Trump does not face tangible consequences for his seditious acts until after his term ends. Unaccountability breeds impudence, a debasing of norms, and a lowering of standards. It’s why President George W. Bush, a war criminal, a torturer, a person who should have been impeached and convicted for fabricating evidence to lead the U.S. into an illegal war of aggression, is now the voice of reason for the GOP.

Until Trump was elected, it was difficult to fathom a more incompetent and evil president than Bush. There is a direct line between Congress failing to hold Bush accountable and what we are witnessing today.

It is not possible nor reasonable nor democratic to sanction the 74 million people in the United States who voted for Trump in 2020 or even the estimated 26 million who supported the coup attempt. But it is an urgent moral necessity to hold accountable all those who incited the coup attempt through their mendacity and vitriol. 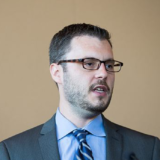