The Russian invasion of Ukraine appears as the most serious test for GCC states to excel their navigation skills in a multipolar world. 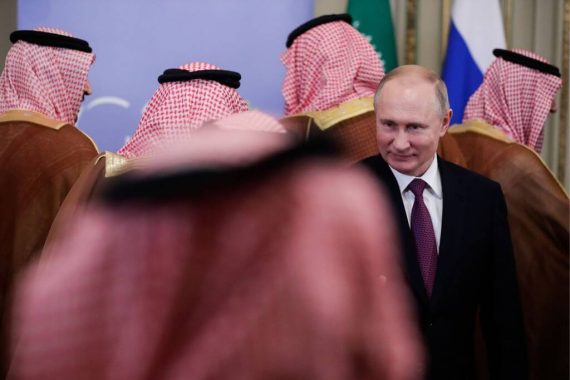 Russia's President Vladimir Putin during a meeting with Saudi Arabia's delegation members on the sidelines of the 2018 G20 Leaders' Summit. Photo by Mikhail Metzel, TASS via Getty Images

The escalation between Russia and Western states over NATO enlargement turned into a full-scale Russian invasion of Ukraine, as Russian President Vladimir Putin ordered a “special military operation” on February 24, 2022.

While the entire world is witnessing the largest attack of one country on another in Europe since World War II, the Gulf Cooperation Council (GCC) members are far from being decisive in condemning Russia for invading Ukraine. Geopolitics, the perceived U.S. retreat from the region, and deepened ties between Russia and the GCC states seem to force Gulf monarchies to strike a balance in this conflict.

A hesitant Gulf towards the Russian invasion

The day before the invasion, speaking on behalf of the GCC during a UN meeting, Abdulaziz Alateek, Saudi Arabia’s deputy permanent representative to the UN, conveyed the council’s concerns about the escalating situation in Ukraine and urged all parties to solve the crisis through political dialogue and diplomacy. Yet, as the military invasion and the conflict unfold, the GCC’s stance towards Russia’s aggression remains reticent.

At the time of writing this opinion article, none of the six GCC states have issued a press release on their foreign ministry websites openly condemning Russia. For its part, Qatar has pursued an active phone diplomacy with Ukraine as Emir Sheikh Tamim bin Hamad al-Thani received a phone call from Ukrainian President Volodymyr Zelensky.

Qatar’s foreign minister exchanged calls with his Russian and Ukrainian counterparts, and denounced the violence. Ukrainian Foreign Minister Dmytro Kuleba also had a phone conservation with Bahrain’s foreign minister Abdullatif bin Rashid Al Zayani to urge the GCC to call on Russia to cease the conflict.

Kuwait released a statement underlining that the “State of Kuwait stresses the importance of respecting Ukraine’s independence and sovereignty and affirms its full support to international efforts aimed at calming the situation, defusing escalation, promoting self-restraint and addressing international conflicts by peaceful means.” Kuwait’s sensitivities on state sovereignty might go back to painful memories of the Iraqi invasion of the Gulf monarchy in 1990.

The United Arab Emirates (UAE) abstained from the UN Security Council vote on February 26 condemning Russia and asking Moscow to withdraw its troops. The UAE called the result a “foregone conclusion” and urged for dialogue avenues to be opened.

What is at stake? Deepened and diversified Russia-GCC ties

One of the most important reasons for the GCC to refrain from a decisive stance against Russia is the intensified, deepened, and diversified relations between the Gulf monarchies and Moscow. In the last years, Russia emerged as an important actor and partner for GCC states politically, militarily, and economically.

“Moscow has increasingly embedded itself in the Middle East region, in Syria, Libya and through OPEC+ so that none of the GCC states wants to spoil the relations with Russia,” said Nikolay Kozhanov, associate professor at Qatar University’s Gulf Studies Program, to Politics Today.

One concern might regard food security in the GCC states given that Russia is the largest wheat exporter in the world with approximately an 18% percent market share. Any disruption to the access to the main food sources would threaten food security in the Gulf monarchies given their high reliance on cereal imports. In this regard, agricultural products constitute an important dimension of trade between Russia and GCC countries.

In 2019, the largest export item to Saudi Arabia, accounting for 18.8% of all exports, was barley with a value of $232 million. Wheat also constituted 32.7% and 6.1% of total Russian exports to Oman and the UAE respectively in the same year. Yet, the GCC is not as dependent on Russian grain as Egypt and Turkey.

It is unlikely, therefore, that a possible deterioration of trade relations with Russia will cause food insecurity in the Gulf and the GCC states can sustain their food security in the high-risk scenario thanks to their diversified sources and strategies.

Military cooperation is another strategic and diversified layer of Russian-GCC relations. Since 2015, Russia is an emerging partner for GCC states in arms sales. According to the SIPRI Arms Transfer Database, Russia’s arms exports to the GCC states rose from $48 million in 2015 to $331 million in 2020, the UAE being the largest recipient.

In 2018, Russia and the UAE signed a declaration of strategic partnership and engaged in joint investments in the military industrial sectors. Security cooperation between Russia and the UAE has grown significantly in Syria and Libya as well.

Furthermore, media reports went as far as to claim the Saudi acquisition of a Russian S-400 air defense system would be among the topics discussed during Lavrov’s Gulf tour in March 2021.

As of 2021, Russia-GCC engagement in Syria has been particularly cooperative, and relations with Russia have become too precious for GCC states to discard the conflict in Syria amid growing concerns over the U.S. retreat from the Middle East.

The GCC states’ response to the Russian invasion can equally be viewed from the Gulf monarchies’ changing relations with the U.S. The growing mistrust among GCC states towards the U.S. security commitments in the region is exacerbated by Washington’s militarily hesitant response to the Russian invasion, following its recent withdrawal from Afghanistan.

In the last eight years, the GCC states have witnessed the U.S. shifting many of its red lines. Most recently, the Trump administration’s inaction in the face of attacks against the Saudi oil facilities in 2019 stood as a sharp reminder for Gulf monarchies that the U.S. security blanket is not guaranteed.

Saudi Arabia dismissed the U.S. request to pump more oil into the market to reduce prices and reiterated the kingdom’s commitment to the OPEC+, an agreement reached in 2020 with OPEC countries and Russia. Receiving a phone call from President Biden on February 9, King Salman highlighted in a statement “the role of the historic OPEC Plus agreement in this regard and the importance of maintaining the agreement.” According to Robert Mason, Saudi Arabia also refused to cease military cooperation with Russia as a part of the kingdom’s hedging strategy.

Qatar sets to strengthen its ties with the U.S. and emerges as a potentially important gas supplier to Europe, as the conflict disrupts Russian gas which accounts for 40% of European consumption. During the visit of Qatar’s Emir Sheikh Tamim to Washington on January 31, 2021, President Biden designated Qatar as a major non-NATO ally, asking Qatari commitment to energy supplies to Europe.

Qatar’s ability to alleviate Europe’s dire need of energy is limited by its long-term contracts with Asian countries. Qatar itself acknowledges that no single producer has the capacity to replace Russian gas supplies to Europe in the short term. Yet, Sheikh Tamim being the first Gulf leader to visit the White House under President Biden signals the deepening and widening of mutual relations between Qatar and the U.S.

The Russian invasion of Ukraine appears as the most serious test for GCC states to excel their navigation skills in a multipolar world. The GCC states’ reactions to the crisis reflects their well-crafted national interests informed by their economic, ideational, and security needs in the face of declining U.S. commitments. This might be the beginning of a new era in changing security configurations in the region.

Nesibe Hicret Battaloglu is a Research Assistant in the Gulf Studies Center, Qatar University, Doha, Qatar and a PhD Candidate at the Middle East Technical University (METU) in Ankara, Turkey. Battaloglu obtained an MA Degree in Gulf Studies at Qatar University with a thesis on Turkey and Iran’s soft power in Gulf Cooperation Council (GCC) countries. Her research interests are international relations of the Gulf monarchies, Turkey GCC relations and identity and foreign policy nexus in the Gulf.