For many countries in Asia and Africa, including India, Israel and Pakistan, the Russian invasion of Ukraine is a tightrope walk. 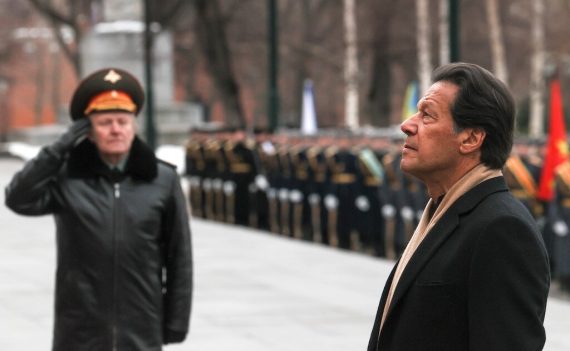 As Russian President Vladimir Putin has launched a “special military operation” against Ukraine, many countries and regional organizations reacted with condemnation, criticism, and sanctions while some others declared their support for Russia. For many countries in Asia and Africa, the Russian invasion of Ukraine is a tightrope walk. Taking a neutral stance is regarded as an expression of support for Russia, and many leaders are concerned about the long-term consequences of publicly criticizing the Russians.

India and the Invasion of Ukraine

India maintains close ties with Russia and the United States. New Delhi has traditionally refrained from criticizing Russian aggression, including the Russo-Georgian war in 2008 and the annexation of Crimea in 2014.

Despite being a key player in the U.S.-led Quad in Asia, India has maintained a unique and privileged strategic relationship with Russia. In recent years, India has diversified its defense procurement, and much of the recently procured high-end defense equipment in the Indian inventory is of Western origin, particularly American and French; however, Russia still remains India’s largest arms supplier and a critical strategic ally.

Between 2016 and 2020, Russia supplied more than half of India’s arms imports. Close relationships with Moscow not only provided top-of-the-line military equipment, but also the much-desired strategic autonomy to India.

At a time when New Delhi has invested a lot of political capital in strengthening its ties with Washington, it is not easy for India to strike a delicate balance between its relationships with the United States, Europe, and Russia.

Between 2016 and 2020, Russia supplied more than half of India’s arms imports.

India’s archrival, Pakistan, which has had strained relations with Russia in the past, is now trying to improve its bilateral relations. Pakistani Prime Minister Imran Khan met with President Putin in Moscow as the Russian military forces were invading Ukraine. Khan’s visit to Moscow happened at the cost of Pakistan’s straining relations with the United States.

Since 2004, Washington and New Delhi have been pursuing a “strategic partnership” based on shared values and broadly convergent geopolitical interests. As ties have grown stronger since 2014, remaining silent on the Russian invasion of Ukraine has become a greater risk. New Delhi is already under fire for acquiring Moscow’s S-400 missile defense system last year.

Washington will most likely waive sanctions on India for the purchase of an air defense system, just as it did for Indian investments in Iran’s strategic Chabahar Port. However, recent events indicate that the Biden administration will increase pressure on India to reduce future Russian arms imports.

Pakistan and the Ukraine War

Pakistan’s situation is less severe but more critical. After Vladimir Putin announced the military operation in Ukraine, Pakistani Prime Minister Imran Khan concluded his visit to Moscow. Relations between the two countries have been improving for several years, owing in large part to geopolitical factors such as Russia’s strengthening ties with China, Pakistan’s ally, the crisis in Afghanistan, and some sluggishness in India-Russia relations.

The timing of Khan’s visit may give the impression that Pakistan indirectly supported Putin’s decree on breakaway regions in eastern Ukraine, as well as the invasion, which began just hours after Khan arrived in Moscow. Pakistani officials have insisted that Khan’s visit to Moscow had nothing to do with the ongoing conflict between Russia and Ukraine. The visit was planned much earlier, and Khan and Putin stated that they discussed bilateral and South Asian issues during their meeting on Thursday.

The challenge for Pakistan will be to strengthen ties with Russia without alienating Western trade partners.

At a time when the world has become increasingly divided between the Western and China-Russia camps, it has become ever more difficult for India and Pakistan, South Asia’s rivals, to remain neutral.

The challenge for Pakistan will be to strengthen ties with Russia without alienating Western trade partners, all while balancing a growing defense relationship with Ukraine. Islamabad’s balancing act is simpler than that of New Delhi: its relationship with the U.S. is strained, and it has long sought to use its alliance with China to collaborate more closely with Russia, particularly in Afghanistan and Central Asia.

However, given its commercial ties with Europe and desire to play a larger role on the global stage, Islamabad must be cautious not to get too close to Moscow.

Although Pakistani authorities maintain that they want good relations with both China and the United States, and it was difficult to cancel or postpone the visit at the last minute, many Pakistanis believe Imran Khan could have rescheduled his trip.

Israel showed a calculated response to the Russian aggression in Ukraine.

At a time when neutrality and silence are seen as support for Russian aggression in Ukraine, Chinese influence and fear of irritating Russians forced Pakistani officials to go ahead with Khan’s trip to Moscow.

Israel, which has maintained excellent relations with Russia, demonstrated a calculated response to the Russian aggression in Ukraine, prompting significant criticism in the West. Israel is attempting to strike a balanced tone, doing the bare minimum to meet the bar set by the U.S. while avoiding crossing the red line drawn by Russia.

On February 22, Israel issued an insipid announcement supporting Ukraine’s “territorial integrity” without mentioning Russia. An irritated Russian ambassador to the UN responded by stating that his country opposes Israel’s occupation of the Golan Heights. This reference to Israel’s takeover of the Golan Heights from Syria 55 years ago signaled to Israeli officials that the time had come to get off the fence.

It will be difficult for astute Israelis to fool Putin. Israel expected to take an ambiguous stand, as it did following the 2014 Russian invasion of the Crimean Peninsula. Then, Israel simply abstained from the UN vote, citing a fictitious general strike in their foreign ministry as justification.

Because of its massive military presence on the Syrian side of the occupied Golan Heights border fence, Russia has become Israel’s “northern neighbor.” Russia also enjoys a huge influence on Israel’s archenemy, Iran, and Israel very well knows the repercussions of annoying Russia.

The China Factor in the Russia-Ukraine War

Despite abstaining from voting in the UN Security Council resolution against Russia’s Ukraine invasion, China has avoided using the word “attack” in reference to the Russian invasion. Many Asian and African countries are also reluctant to take sides in the dispute, not only because they do not want to annoy the Russian bear, but also because of the Chinese dragon. Opposing Russia means siding with the U.S., which may irritate China.

Regardless of what Pakistani officials have been saying about Pakistan’s “neutrality,” Islamabad’s close ties with Beijing are no secret, and it is believed that Beijing facilitated the meeting between Putin and Khan in Moscow.

Even as India has grown closer to the U.S., Russia’s relations with the U.S. have deteriorated to a new low following the invasion of Ukraine. Meanwhile, the former superpower has deepened its relationship with China, which is now its top trading partner. The Russian-Chinese shared hostility toward the United States is also a significant factor in the strengthening of this relationship.

In an evolving world order, India’s deepening alliance with the U.S. and the growing hostility between the U.S. and China-Russia are expected to intensify. This creates a conundrum for India: how to deal with the growing Chinese threat while also maintaining engagement with Russia.

Ukraine’s invasion brought on unprecedented sanctions on Russia, and Germany ending its opposition to SWIFT (international financial transactions through a network of banks) sanctions will mean that Russia will see the toughest sanctions imposed on any nation ever.

In the coming months and years, Europe will work to reduce its dependence on Russian oil and gas, eliminating the vital negotiating card for Russia and cutting down on its major source of foreign income. This will also increase the country’s reliance on China. As a result, this will be Beijing’s opportunity to shine as Russia’s trusted partner and a dominant global power.

Due to Russia’s capacity for power projection and China’s enormous economic clout, many countries do not have the liberty to take sides. As a result, most Asian and African countries will avoid using strong language and will issue routine statements on Russia’s invasion of Ukraine. Russia is no saint, but the U.S., the torchbearer of democracy, has a much more brutal record of invading sovereign countries than Russia.