All Iranian authorities have unanimously repeated that NATO, specifically the U.S., provoked Russia and Russia is not responsible for the war with Ukraine. 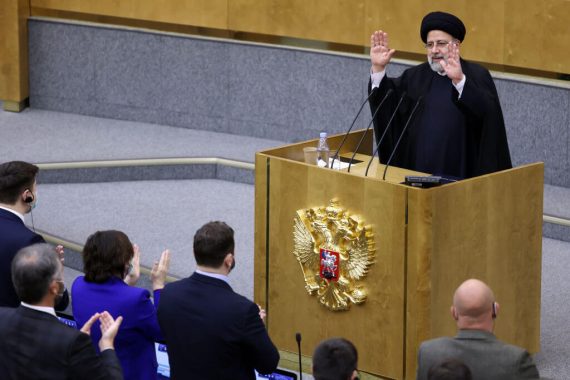 On the morning of February 24, Russia began its invasion of Ukraine, surprising many experts, politicians, and country leaders. Until then, most forecasts predicted that Russia’s aggression would be limited to eastern Ukraine. However, Russia’s simultaneous attacks on Kharkiv, Kyiv, Lviv, Odessa, Crimea, and the Donbass meant a clear invasion of a sovereign state and an undisputed violation of international law.

Iranian President Ebrahim Raisi held a telephone conversation with Russian President Vladimir Putin on the day the invasion started. President Raisi blamed NATO for the war started by Russia, saying, “NATO expansion is a serious threat to the stability and security of independent countries in different regions.”

Iranian Foreign Ministry Spokesperson Saeed Khatibzadeh invited parties to the conflict to a “dialogue” to reduce tensions as soon as possible, while Foreign Minister Hossein Amir-Abdollahian said the war is “rooted in the NATO provocations.”

The highest political authority in Iran, Supreme Leader Ali Khamenei, broke his silence on the invasion on March 1, by tweeting, “The U.S. dragged #Ukraine to where it is now. By interfering in Ukraine’s internal affairs, creating color revolutions and toppling one government and putting another in power, the U.S. dragged Ukraine into this situation.” All official Iranian authorities have unanimously repeated that NATO, specifically the U.S., provoked Ukraine, and Russia was not responsible for the war.

Different voices have also emerged within Iran. Outspoken former MP Ali Motahhari said it is necessary to pursue an independent foreign policy and support Ukraine. Small-scale demonstrations were also held in the capital Tehran to support Ukraine. Nevertheless, in official discourse and media coverage, the theme that war is the Western world’s fault has been reiterated. Thus, the official discourse tries to draw the Iranian public into an anti-Ukrainian position.

Blaming the West for the Russia-Ukraine crisis is not only a function of the anti-Western orientation that brings Iran and Russia together, but it is also compatible with the new foreign policy understanding that has come into effect, especially after Raisi was elected president and announced relations with the East as his priority.

The asymmetry in Tehran-Moscow relations, which have turned against Iran in recent years, lies behind Iran’s acquitting Russia of any responsibility, and blaming NATO instead of defending the territorial and political integrity of Ukraine. Iran, which cooperates with Russia on many issues, especially Syria, has calculated that opposing Russia’s invasion of Ukraine will get it in trouble. It is crucial for Iran that Assad stays in power in Syria, and in this sense, the Tehran administration cooperates with Moscow.

In addition, Russia and Iran, along with Turkey, are among the main actors of the Astana peace process. Apart from this, Iran needs Russia’s veto power in the UN Security Council regarding the nuclear issue. The two countries’ Caucasus policies are also interconnected as Iran acts together with Russia and Armenia to balance Turkey and Azerbaijan. Furthermore, since Iran is a Shiite-dominated country, it is seen by Russia as a balancing factor against Islamist Sunni groups in the Caucasus.

In addition, commercial cooperation between the two countries is vital for Iran. The Tehran administration continues its efforts to implement a 20-year agreement with Russia similar to the one it has with China. Finally, Russia provides technology support for Iran’s nuclear activities. For example, the Bushehr Nuclear Power Plant, completed in 2011, was constructed by Russia.

Many European countries, especially Germany, initially acted timidly towards Russia and did not give Ukraine the necessary military, economic, and even diplomatic support. Germany did not support Ukraine and prevented Estonia from sending German-made weapons to the country. Behind Germany’s attitude lay its dependence on Russia in terms of energy.

This was also related to Germany’s Nord Stream 2 project, which received Russian gas via the Nord Stream 1 line. Germany did not want to confront Russia, which could lead to a natural gas supply crisis.

The disagreements between the U.S. and European countries and even among European countries themselves, allowed Russia to exploit this disjointedness and invade Ukraine. However, if there had been diversification in Europe’s energy resources, countervailing steps against Russia could have been taken, and perhaps Putin would have had to think twice about invading Ukraine.

Moreover, a potential energy source for European countries, Iran, has been stripped of all its choices by the U.S. and European countries, and forced to turn to Russia. With the withdrawal of U.S. President Donald Trump from the JCPOA (Joint Comprehensive Plan of Action) in 2018, heavy sanctions were imposed on Iran again.

On the other hand, the European countries on their own could not functionalize the agreement, even though they said they are committed to it. Therefore, the EU could not carry out an independent Iranian policy without being influenced by the United States.

As a response to the U.S. withdrawal from the JCPOA, Iran accelerated its nuclear activities and exceeded the limits stipulated in the 2015 nuclear agreement. Although attempts were made to find a diplomatic solution after this development, which caused concern in the Western world, no concrete progress could be made until the election of Joe Biden and Ebrahim Raisi.

The Iran nuclear negotiations started again in Vienna on November 29, 2021. In recent days, reportedly significant progress has been made in Vienna. If a new agreement is signed between Iran and the world powers in line with expectations, Iran can freely sell oil and natural gas. Before the sanctions, Iran was selling oil to many European countries, especially Germany, Italy, and France, via tankers.

Iranian oil can be shipped to Europe again, and Iranian natural gas can be transported to Europe if the necessary infrastructure is built. Turkey’s approach in this regard is also positive. All in all, the energy that Europe needs can be supplied from Iran through Turkey.

Possible common ground for a nuclear agreement with Iran will have two consequences: First, NATO member countries will be less hesitant to respond to Russia’s aggression, as it will ensure diversification in Europe’s energy resources. Second, Iran can act independently from Russia without fear of a backlash on issues such as Ukraine, as the improvement of relations with the West will reduce its dependence on Russia.