As the referendum day is coming closer, the Kurdistan Regional Government (KRG) shows no sign of stepping back despite disputes within the region and a number of calls from the central government of Iraq as well as the major regional and global actors. 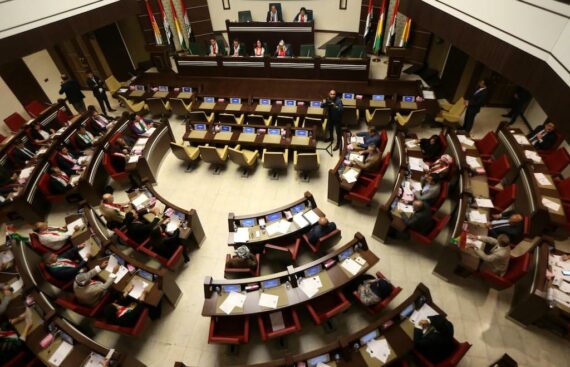 A picture taken on September 15, 2017 shows a general view of Kurdish MPs sitting during a session of regional parliament in Arbil, the capital of the autonomous Kurdish region of northern Iraq. Iraqi Kurdish lawmakers approved holding an independence referendum on September 25 as members of the opposition boycotted the parliament's first session in two years. AFP

As the referendum day is coming closer, the Kurdistan Regional Government (KRG) shows no sign of stepping back despite disputes within the region and a number of calls from the central government of Iraq as well as the major regional and global actors. From the perspective of the KRG, a delay is still possible if the West, particularly the US, guarantees recognition after a delayed referendum, but this still has not happened as the referendum day is approaching fast. As for the objections from the global powers, the United States, through the Secretary of State Rex Tillerson, has recently repeated its stance on the issue by calling the KRG President Masoud Barzani to postpone the planned referendum on September 25th.

Likewise, the Russian Deputy Foreign Minister Mikhail Bogdanov has also emphasized Russia’s stance on the issue by expressing Moscow’s support for the unity, sovereignty and territorial integrity of Iraq. While the two global powers are disunited on the politics of the Middle East, their concerns seem to be similar in respect to the planned referendum. Both sides show their worries for the possible negative repercussions of the planned referendum regarding the stability of Iraq and the ongoing war against DAESH.

In response to the arguments made concerning unity and the fight against DAESH, Regional President Barzani has retained a constant stance arguing that DAESH is a product of a unified Iraq and that the current state of the Middle East is far from unity and stability anyway. The picture for the position of the global powers does not change when we add Germany and China to the equation as well. They all seem to acknowledge the Iraqi Kurds’ right for self-determination but express their concern with the timing (aka “it is too soon”) and style (aka “talk to Baghdad one more time”) of it. While Germany seems to have had this opinion for quite a while, China seems to have shifted away from a fixed anti-separatism position to a more neutral one with the help of its developing economic ties with the KRG.

As we downsize the scale from global to regional actors, Israel and Iran seem to be the opposite poles of this issue. While Israel supports the KDP’s quest for independence, the toughest objection comes from Iran. Israel seems to view the KRG’s independence call as an opportunity, as it is eager to develop cooperation with an independent Kurdistan, particularly in order to end its own isolation in the region and further to contain Iran and limit its access to Syria. Furthermore, an independent Kurdistan would be a good distraction for Arab states by turning many hostile faces away from Israel.

As for Iran, the primary motivation seems to be its fear of being contained and losing its upper hand in Iraq and Syria. Iran has also reasons to worry from a diffusion effect of the independence seeking Kurdish nationalism, on top of the long legacy of violent separatism in the country, as it is currently facing serious protests in its heavily Kurdish populated cities.

What about Turkey? What is the driving force for Turkish politicians’ calls for caution and wariness to the KRG President Masoud Barzani? For one, Turkey, as expected, also feels threatened by a possible diffusion effect from the independence aspirations of Iraqi Kurds. While this is true, what drives the paramount Turkish approach is not a possible or even probable future scenario regarding popular aspirations, expectations or perceptions. Turkey’s understandable concern is real, tangible and current: the presence of the PKK camps and headquarters in Northern Iraq. The question I believe best summarizes Turkey’s primary concern is “what if the PKK hijacks the planned Kurdish state?” Turkey’s concern is far from a paranoia given the fact that the PKK currently de facto rules certain areas in Northern Iraq, has certain ties with the local actors such as the PUK and Gorran and even with the US through its Syrian branch, PYD. So therefore, Turkey’s concern is not a minor one, nor unsound. While this concern is significant, Turkey’s closest associate in its fight against the PKK at present and in the foreseeable future, is another Kurdish organization, the KDP.

Turkey has long suffered from PKK terrorism and has lost thousands of security personnel, hundreds of teachers and civil servants, politicians and random civilians at the hands of the PKK over the 33 years long history of the conflict. Turkey at times benefited from its Western partners in its struggle with PKK terrorism as in the case of Öcalan’s capture in Kenya in 1999. However, not only are Turkey’s longtime allies now officially providing weapons to the PKK’s Syrian branch, PYD, the PKK’s enlisted members can freely travel in Europe and the PKK are freely publishing death orders in its newspapers printed in Europe.

While Turkey is being left alone by its Western partners, Masoud Barzani’s KDP seems to be the closest ally for Turkey’s fight against the PKK. On top of the violent past of the KDP and PKK in Iraq, the PKK has also accused the KDP for providing ground intelligence to Turkey for its recent military operations and blockage of the passage used by PKK members between Iraq and Syria. On the other hand, the KDP has also condemned the PKK attacks on the Syrian Kurdish National Council (ENKS, the KDP affiliate organization in Syria) offices in Syria amidst the rivalry in Sinjar, Iraq.

Given that the PKK is a destabilizing actor not only in Turkey but also in the KRG-ruled areas, the Turkish government and the KRG have mutual interests in the fight against the PKK. Moreover, Turkey and the KRG’s trade deals are now well-known and ever growing as Turkey is the top investor and trading partner in the region, a situation that has been preserved despite the PKK’s efforts to spoil it. This is why the Turkish official reaction to the planned referendum is not as loud as Iran’s.

It appears clear that any actor wanting to cooperate with Turkey in the region needs to show its commitment to Turkey’s fight with PKK terrorism. Turkey has no means to tolerate neighbors who host, or “partners” who arm its number one security threat, the PKK. Hence, in reference to the referendum, Turkey’s choice seems to be of a conditional one – neither categorically fixed in favor or against the emergence of a Kurdish state. For Turkish interests, what matters most is not the name of the country across its southern borders, but its position vis-a-vis the PKK. Turkey seems to follow one single, straightforward goal: the termination of the PKK headquarters and camps in Iraq (and anywhere else across the region), for once and for all. Thus, Turkey’s choice is the option that enables this end.