Chinese investments in Northern Iraq raise some questions. Is the devil is in the details? 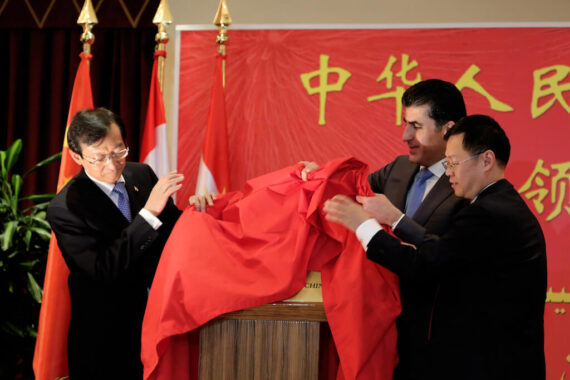 The beginning of the relations between China and the KRG, the semi-autonomous Kurdistan Regional Government, dates back to the toppling of Saddam Hussein in 2003. Despite this relatively short history, Beijing has significantly strengthened its economic and diplomatic presence in the region. Only in the past six months, Beijing has signed a number of multibillion-dollar agreements with authorities in Erbil.

Among them are the $210 million contract for the construction of a cement plant based in Erbil, a $5 billion project for a giant housing development and an urban tourist attraction in the city (both announced in October 2020), and a $5 billion agreement for the construction of a massive Chinese commercial center (signed in January 2021). All this, without mentioning the enormous help China provided to Erbil during the COVID-19 pandemic by supplying hospitals and the public with masks, sanitizers, and necessary equipment.

Furthermore, China is increasing its diplomatic presence in northern Iraq. Earlier, in 2014, by opening its consulate general, Beijing showed clear support to the KRG and established a solid diplomatic presence in the region. During the opening ceremony, China’s Vice Foreign Minister Zhang Ming said, “The opening of our consulate general in Erbil expresses our strong support for the political process in Iraq. It is a sign of our strong desire to further deepen and strengthen our bilateral ties with Iraq and the Kurdistan Region in various fields.” This move turned a new page in developing diplomatic relations between Beijing and Erbil.

Considering it was the time when Daesh (ISIS) was at the peak of its strength in Iraq, Beijing’s move meant China had a number of strategically important plans in Iraqi Kurdistan. Despite the aggressive and devastating interventions by Daesh in Iraqi lands, the KRG was able in a surprisingly short period of time to protect and free its territories, such as Mosul and Kirkuk, from terrorists – to a great extent as a result of having its own military forces. For many, northern Iraq was a safe area that could be defended using its own forces, independently from Iraq’s central administration.

At the same time, the KRG took control of the oil-rich province of Kirkuk and connected its oil reserves to the pipeline linking the region to Turkey. This opened a lucrative opportunity for the Kurdish government to raise its oil production to up to 450,000 barrels a day and created the ground for new Chinese investment projects in the region.

China’s non-ordinary approach to enhancing economic and diplomatic ties with the KRG during politically unstable times in war-torn Iraq is explained by Beijing’s ambitions to secure and expand its Belt and Road Initiative far beyond Iraq and the KRG. Following its non-interference policy and soft military presence in the Middle East, China is becoming an influential player in the region. Through its involvement in UN peacekeeping operations (UNPKO), China uses soft power to intervene in the international affairs of other countries, and especially Arab and African countries.

For instance, in 2015, China sent over 1,000 troops to South Sudan and Darfur as part of UNPKO. The decision was mainly driven by Beijing’s interests to expand trade and commerce and to gain access to the region’s oil and mineral resources. Following its broad economic foreign policy, Beijing pressured the authorities in Khartoum to join the United Nations Peacekeeping Operations as part of the African Union by proposing investments in the region’s prospective sectors such as the oil industry and agriculture.

China has also been a frequent facilitator in negotiations between the Taliban and Afghan authorities. China pursues a mediation role in the Syria conflict too and aims to become a key investor in Syrian infrastructure, energy, and other industries as part of international efforts to rebuild the country.

Today, China’s strategy in Iraqi Kurdistan follows an ambitious geopolitical goal: to scale up Big Asia’s vector. This refers not only to a geographical frame but also to the emergence of a new counterbalancing power against the West, Russia, and Turkey that will be led by China and Iran.

Having pursued a pro-Western policy for decades, the government of Iraqi Kurdistan is turning its geopolitical and economic compass to the East. It’s enough to recall the speech of Chancellor Masoud Barzani in 2018 to verify this claim. During the meeting with the Chinese ambassador to Iraq, Chen Weiqing, Barzani expressed his hopes that China would play “a greater role” in bringing stability to the Middle East – a role that China appears to have realized.

China, a poor country only a few decades ago, has now become a superpower with a new approach. China’s influence in the Middle East, and particularly in Iraq and the KRG, goes far beyond the economic and geopolitical dominance. Within a couple of years, China has introduced its culture and language to the region. Books about China and its leaders are being translated into the Kurdish language, while tourist spots, hotels, and even some schools in Erbil have started to provide information to visitors in Chinese, apart from English and Arabic. The famous Salahaddin University-Erbil has opened a center for the Chinese language.

However, there are several risks of letting Beijing dominate northern Iraq. One is that economic relations between the KRG and China are still one-sided. In order to avoid the trade deficit and the potential inflation crisis, the KRG has to balance the imports and exports between the region and Beijing – preferably by finding other sources of exports apart from oil.

The second risk is the internal tensions between the KRG and Iraq. Should the Chinese political approach and ideology prevail in the region, it will seize the freedoms enjoyed in Erbil with its semi-autonomous status from Baghdad, as China has always supported a centralized governance model.

Finally, the Chinese Model could impact the KRG’s economic and diplomatic ties with the U.S., Russia, and Turkey, all of whom are still very important geopolitical partners in the region. This may lead to the isolation of the KRG and Baghdad from the global economy, and to becoming cut off militarily and in terms of goods supplies.

It may also exclude KRG from international diplomatic initiatives such as the U.S.-funded media outlets aimed to promote the Kurdish language, culture, and policies (e.g. Radio Nawa) and lead to the political enhancing of ties with Russia as seen by the visit of the Kurdistan Democratic Party (KDP) delegation to Moscow to enhance Russian-Kurdish cooperation in Syria.

Yet, this scenario is – at least – for the moment unlikely as the KRG has the ability to use its soft power and to establish diplomatic ties with nations which oppose each other in the international arena.