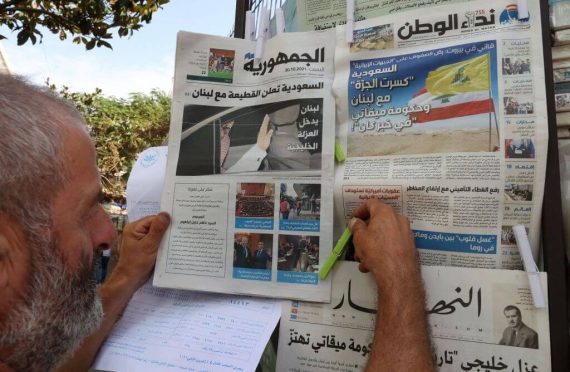 A newspaper vendor arranges newspapers, bearing headlines of the diplomatic row with Saudi Arabia, at his stall in the Lebanese capital Beirut on October 30, 2021. - Kuwait gave Lebanon's ambassador 48 hours to leave the emirate, a day after Saudi Arabia made a similar move over a minister's comments about its war in Yemen. Photo by ANWAR AMRO/AFP via Getty Images.

Lebanon’s agony was compounded over the past few weeks as a result of statements made by the country’s newly appointed minister of information, George Cordahi, in a prerecorded online media interview that saw the light on September 10, 2021, but which was filmed in August 2021 and released after Cordahi was appointed in Najib Mikati’s government on September 10.

In the interview, Cordahi committed a series of blunders which highlight his very basic understanding of regional politics (or even politics, in general) and his skewed moral compass regarding what constitutes an admirable leader in his opinion (i.e., Bashar Assad and Vladimir Putin). However, all of that didn’t matter and quickly became a sideshow against the backdrop of the measures that were immediately enacted by the Saudi government following the airing of the episode by the online platform of Qatari state-owned Al Jazeera.

Riyadh seemed to have taken offense in Cordahi’s statements on Yemen, where he said that the Iran-aligned Houthi group was “defending itself … against an external aggression,” adding that “homes, villages, funerals and weddings were being bombed” by the Saudi-led coalition. He also called the 7-year war in Yemen “futile” and said it was “time for it to end.”

A diplomatic crisis spiraled out of control, with Riyadh fully halting Lebanese imports and ordering the “recall of the ambassador in Lebanon for consultations, and the departure of Lebanon’s ambassador to the kingdom within 48 hours.” Other countries within the Gulf Cooperation Council (GCC) followed suit or took other measures, but the GCC appeared united in its stance against Lebanon – the Gulf’s unity on such a negative position towards Lebanon constitutes a precedent, with Oman and Qatar taking less escalatory measures than their counterparts.

The crisis goes well beyond Cordahi’s words regarding the war in Yemen.

Yet, while the blame for what transpired is being directed towards Cordahi, with several Lebanese politicians or sectarian leaders denouncing his statements and asking him to resign – including, in an indirect way, the incumbent prime minister – the crisis goes well beyond Cordahi’s words regarding the war in Yemen.

In fact, from an observer’s point of view, the current diplomatic crisis has been a long time coming with the perfect storm brewing over the years, especially since back in 2016 the so-called presidential deal was struck between Saad Hariri, Michel Aoun (and his U.S.-sanctioned son-in-law Gebran Bassil), and Hezbollah.

The deal birthed what was dubbed a neo-troika, which represents a power-sharing arrangement reminiscent of the one that existed during the Syrian regime’s occupation of Lebanon. However, this time, the main antagonists were the top leaders of the three main sects in Lebanon: the Maronites, the Shi`a, and the Sunnis. Yet, the neo-troika does not place all three parties on an equal footing within Lebanon’s power-sharing arrangement.

As such, the deal resulted in Michel Aoun filling the seat in Baabda’s presidential palace, a bid Saudi Arabia often opposed, and saw Hariri become the “useful idiot” as many observers reflected, a façade Hezbollah needs in terms of a well-connected and a West-favored/accepted Sunni prime minister, which allows the group to rule while passing the buck on any – or all – of the country’s governance shortcomings.

The Saudis were indeed angered by the deal, especially since they historically enjoyed a “veto power” over the political process in post-Ta’ef Lebanon (1990 and onwards).* However, Aoun’s election to the presidency, through a parliament whose legitimacy remains under question to this day due to its unlawful decision to extend its mandate three times, signaled an end to the Saudi veto power over major political decisions in Beirut.

The kingdom, however, had already given up on Saad Hariri, its main racehorse in Lebanon and the heir of the largest asset Riyadh held in Beirut, namely Rafic Hariri.

The kingdom, however, had already given up on Saad Hariri, its main racehorse in Lebanon and the heir of the largest asset Riyadh held in Beirut, namely Rafic Hariri. Riyadh’s departure from its Hariri investment was ushered following the detaining of Saad in Riyadh back in November 2017 as part of a “royal shakeup” conducted by the kingdom’s de facto ruler, Crown Prince Mohammed bin Salman. The shakeup was conducted against what constituted the old guard in Saudi Arabia, which Saad Hariri was seen to be part of.

The ultimate weakening of Hariri and the disintegration of the political camp that was previously perceived to balance Hezbollah’s growing power, catapulted the Iran-funded and armed group into new echelons of influence in Lebanon. May 2018 resembled the final nail in the coffin, with Hezbollah and its allies winning a majority in the parliamentary elections allowing it to exercise control over the legislative, the executive, and the presidency. This inherently meant fully controlling the country’s foreign policy too.

Two major incidents exemplified Riyadh’s waning influence and Lebanon’s break from its traditional foreign policy positioning. Both incidents were championed by none other than Gebran Bassil, Hezbollah’s main Christian ally in Lebanon. In February 2016, U.S.-sanctioned Gebran Bassil refused to condemn attacks on the Saudi embassy in Tehran and its consulate in Meshhad. Bassil, at the time, was a foreign minister and his decision broke with Arab unanimity within the Arab League.

Even Iranian President Hassan Rouhani, at the time, denounced the attacks, and said that his government had opened an investigation to punish the perpetrators. Moreover, Bassil refused to condemn drone attacks that targeted two major Saudi Aramco oil installations in September 2019. Bassil justified his stance by equating the Houthi attack on Riyadh to the Saudi-led Arab coalition on Sanaa while alluding to the policy of “dissociation” to avoid taking a stance. That did not bode well with Riyadh, given the gravity of the attack which obviously crossed all the red lines between Riyadh and Tehran.

Riyadh effectively realized – the hard way – that it went from hero to zero in Beirut in a span of only 15 years. This can be viewed as a record time for a country’s shift in allegiance given the size of investments Riyadh once held in Beirut, and especially since it engineered the end of the civil war in 1990 and funded Lebanon’s postwar reconstruction drive.

While Lebanon was previously seen as a satellite state were Riyadh and Damascus shared influence, the country today rotates in the Iranian orbit despite Riyadh and other powers, like the United States, retaining considerable influence there.

In today’s regional geopolitical setup, Lebanon falls within the “Iranian influence archipelago,” a reality supported by statements made by senior Iranian officials, the current Lebanese political state of affairs, and the fact that the international community includes the Lebanese dossier whenever it intends to negotiate with Tehran. After all, Najib Mikati’s government did not see the light despite the immense effort and pressure France’s Elysée exerted over 13 months up until French President Emmanuel Macron received a nod from the Iranians following the installment of their new hardline administration in Tehran.

Nevertheless, the recent Saudi escalation towards Lebanon appears to be a last hurrah despite the Saudis framing it as them cutting their losses in Lebanon and leaving. The developments in Iraq and Lebanon over the past two years – since the uprisings of October 2019 broke out in both countries – and the growing anti-Iranian sentiments in both countries, reinvigorated the Saudi drive to try and instrumentalize the new dynamics in order to attempt to roll back Iranian influence in the region.

The results of the Iraqi parliamentary elections that were held last month and the huge blow that the Iran-aligned militias were dealt, cemented the Saudi conviction, especially as Riyadh maintains good relations with the caretaker Iraqi PM – who until now remains the most favorable candidate to be reappointed to the position– and the winner of the parliamentary elections, Muqtada al-Sadr. Iraq’s influential Shi`ite cleric, al-Sadr, made a rare visit to Saudi Arabia in July 2017 and met with Mohammed bin Salman.

With today’s intertwinement of dossiers in the region, especially due to Iran’s bloated influence in Syria, Iraq, Lebanon, and Yemen, the Saudis as much as the Iranians, view the regional chessboard as one unit where they can put pressure on each other in different places to gain concessions. Meanwhile, both had a major interest in engaging in an Iranian-Saudi dialogue that is taking place in Baghdad, an attempt to appease the administration of President Joe Biden. From one side, the Saudis want to appear like they’re breaking away from the zero-sum approach they pursued towards Iran during the days of Donald Trump’s administration, while the Iranians benefit from a semblance of regional diplomacy to try and keep “regional matters” away from the negotiation table in Vienna.

In Yemen, Hezbollah’s role has exponentially grown over the course of the conflict and currently exhibits one of Riyadh’s major threats/concerns with the Houthi-aligned group directly located at the kingdom’s southern borders. Therefore, Iran and Hezbollah see a major opportunity in Yemen and continue to shun any political agreement that could put an end to the war before the Houthis capture the oil-rich Ma’rib Governorate, the last stronghold of the Saudi-backed government of President Abd-Rabbu Mansour Hadi. If Ma’rib falls, Iran would succeed in cloning its Hezbollah model with Israel in Yemen by establishing of a pressure point against its adversary that it can utilize at any point in the future. More so, the Houthi capture of Ma’rib will put an end to any aspirations for an agreement of power-sharing; the Houthis would then go after all of Yemen.

Back to Lebanon, where Riyadh intends to use whatever is left in its arsenal to put extra pressure on Hezbollah and consequently Iran. One could even argue that, unlike the case in 2015 when Riyadh was passive during the Iranian-American dialogue that resulted in the nuclear agreement, today Riyadh intends to ramp up pressure on the new hardline administration in Tehran. Meanwhile, the latter is trying to collect its bargaining chips before sitting at the table in Vienna and restarting negotiations, at the end of this month.

For Saudi Arabia, the Lebanese parliamentary elections scheduled for March 2022 are an opportunity to hammer down Gebran Bassil’s representation in parliament. In fact, if the Lebanese Forces, Riyadh’s only clear-cut ally in Lebanon at the moment, manages to win a majority of seats within the Christian constituency, this will be a game changer, and Riyadh would have something to work with in Beirut again. If the election results are disappointing for Saudi Arabia, then the kingdom would have already initiated the process of its departure from Lebanon and more pressure is expected to be applied from the GCC on Lebanon.

Today, the Middle East and North Africa regions are edging toward a state of anarchy with the Unites States’ ongoing retrenchment and with regional powers scrambling to build a regional order reminiscent of the pre-2011 purely authoritarian phase. This leaves Lebanon at a major crossroad: either Beirut stops whatever is left of its resistance and completely submerges itself within the Iranian-axis and reaps the repercussions, or it lives to fight another day by attempting to recreate its historical role as an oasis of stability where the region’s competing powers cordially agree to disagree without confronting each other on Lebanese turf.

*The Ta’ef Agreement was negotiated in Ta’ef, Saudi Arabia, to provide “the basis for the ending of the civil war and the return to political normalcy in Lebanon.”