The Myth of Miatsum: Armenia Stuck between the Past and Reality on the Ground

Attempts to establish the "Third Armenian Republic" have failed after the 2020 Karabakh War. It's now time for Armenians to give up the idea of Miatsum. 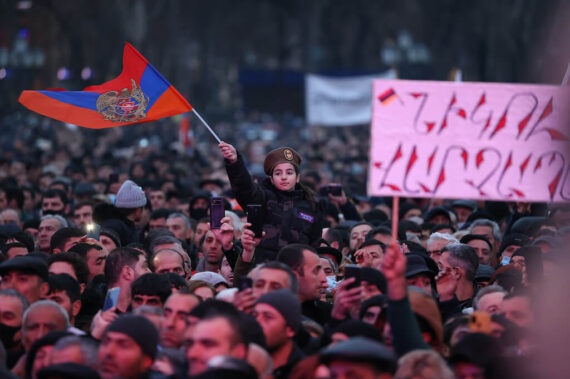 Supporters of Prime Minister of Armenia Nikol Pashinyan gather at the Republic Square during a demonstration in Yerevan, Armenia on March 01, 2021. Photo by Prime Ministry of Armenia via Anadolu Agency.

Armenia today is going through the most difficult and bleak times in its history. Armenians have a poor and growingly poorer country, and a feudal-criminal-oligarchic political regime with collapsed science and education sectors. The country suffers from limited resources that are decreasing year by year and high emigration, above all of the intelligentsia, while the defeat in the Karabakh War in the fall of 2020 caused the loss of military equipment and military property worth $4 billion.

After running along international corridors with requests to influence Azerbaijan during the recent war, today, Armenia is suffering from a multibillion-dollar external debt with a $350 million state budget. This is the real legacy of the “Third Republic of Armenia”, with which today its citizens have to live. And there appears no exit in sight.

The principal reason for this state of affairs is that Armenia has not been able over the course of the 30 years of its existence to put into practice the ideology on which it was created and for which it has exited all this time. The meaning of the existence and all state activity of the “Third Republic of Armenia” was the implementation of the idea of Miatsum: the reunification of the Yerevan and Karabakh Armenians within the borders of a single state and the expansion of their “living space” through, first, the occupation and seizure of Azerbaijani lands, and, then, the territories of other neighbors such as the now Georgian region of Ninotsminda/Javakh with a predominantly Armenian population.

The “Third Republic of Armenia” was born thanks to the Miatsum movement, according to which it acquired its own state ideology, which very soon turned into a national idea and transformed the Armenian people in the diaspora into a modern political nation.

Over the last quarter of a century after the end of the First Karabakh War of 1988-1994, for the sake of the concept of Miatsum, “unification” in Armenian. Armenia has spent excessive funds on the maintenance of the occupation regime in Karabakh. Any true observer, however, could understand that it was not Armenia that occupied Azerbaijani Karabakh, but the separatist regime of Karabakh, which named itself Artsakh, occupied Do you mean occupied Karabakh, and took over all its human, material, and financial resources.

The total defeat of Armenia in the war with Azerbaijan in the fall of 2020 destroyed not only its army and half of its military infrastructure, but also inflicted a severe ideological defeat.

The total defeat of Armenia in the war with Azerbaijan in the fall of 2020 destroyed not only its army and half of its military infrastructure, but also inflicted a severe ideological defeat. It exposed the fact that the idea of Miatsum, which Armenia has lived with for the past thirty and more years, was, in fact, an absolutely unviable utopia. At least two generations of Armenians, who believed in it with reverence and suffered hardships for the sake of its realization, turned out to have been misled. The current internal political situation in Armenia perfectly proves this: the split in Armenian society took place precisely on the issue of each individual citizen’s subjective attitude on Miatsum.

Supporters of the current Armenian prime minister Nikol Pashinyan are ready to abandon Karabakh and the idea of Miatsum for the sake of a new future for their country, while supporters of his main opponent in the early parliamentary elections, former president Robert Kocharyan, count on the reincarnation of Miatsum ideology and believe in a victory in a new war with Azerbaijan, but now not only for Karabakh, but also for Nakhichevan. Miatsum is the cornerstone of the “Third Republic of Armenia”. In October-November of last year, the latter was split by the Azerbaijani army, after which Armenia plunged into internal political chaos, which we are all witnessing today.

Today, Armenia does not have a state ideology and its people have no national idea; therefore, the crisis is characterized by longevity, an uncompromising attitude, and fierceness.

The recent statement by U.S. President Joe Biden about the so-called Armenian genocide that occurred in Ottoman times did not change the situation in Armenia in any way – it only led to the polarization of the political forces. The fact is that the concept “Armenian genocide in the Ottoman Empire” was artificially created in the USSR after the Cuban Missile Crisis of 1962, counting on the mobilization of the Armenian diaspora to support Soviet claims in the region of Western Asia and the Middle East.

It was then that the Central Committee of the Communist Party of Armenia made a decision to build the Tsitsernakaberd memorial in Yerevan, embodying the territorial claims of Armenians toward their neighbors, and primarily toward the Republic of Turkey. This was done in response to the deployment of U.S. Orion missiles to Turkey in order to boost the military potential of NATO’s southern flank in the case of an initiation of aggression against Turkey by neighbors such as the Armenians or the Kurds.

Therefore, the idea of the “Armenian genocide,” which remains so central to the Armenian diaspora, turned out not to be very relevant for the Armenians living in Armenia unlike the idea of Miatsum which became something closer to their hearts and more understandable. The majority of the ancestors of Yerevan Armenians did not experience the hardships of 1915, while the enmity toward Azerbaijanis entered their flesh and blood from the moment they moved to the Caucasus in the 1830s.

In addition, for a long time, there was the Iron Curtain between the Soviet Armenians and the Armenians of the diaspora. This hindered their national, religious, and cultural communication, which explains the difference in the dominant ideologies of the post-Soviet Armenians and the Armenian diaspora: the former were guided by the ideology of Miatsum for a long time, while the latter by the idea of the “Armenian genocide.”

Prime Minister of Armenia Nikol Pashinyan gathers with his supporters at the Republic Square during a demonstration in Yerevan, Armenia on March 01, 2021. Photo by Prime Ministry of Armenia via Anadolu Agency.

After the collapse of the USSR, the idea of Miatsum became a kind of ticket for the post-Soviet Armenians into the Armenian diaspora. This gave it additional value and significance in the eyes of the Yerevan and Karabakh Armenians, in whose eyes Miatsum became a kind of “compensation” for the “genocide” – not for all Armenians, but only for post-Soviet Armenians, as a result of which the topic of “genocide” began to be perceived by them as optional in relation to the idea of Miatsum.

The Armenian diaspora, following the post-Soviet Armenians, was also forced to recognize the idea of Miatsum as a priority, so as not to shatter the sense of a national-religious Armenian unity from within. This ultimately led to the formulation of a new pan-Armenian ideology or the ideological triad “Armenia – Diaspora – Artsakh.” The defeat of Armenia in the recent war and the actual destruction of the occupation regime, which the Armenians themselves called “Artsakh,” put an end to this ideological structure despite what its supporters might claim.

Even Russia’s intervention in the war and the transition to temporary military control of a part of the Azerbaijani territory to Russia will not allow the Armenians in the medium term to hold out, at least in part, of Karabakh. The Kremlin is still able to slow down the complete return of all Azerbaijani territories under the official jurisdiction of Baku and the subsequent resettlement of Armenians from Karabakh, but it is no longer able to guarantee this in the future.

From day to day, Baku is multiplying its official claims against Moscow, which cannot adequately counter them or offer intelligible and comprehensive answers. As soon as the number of these claims reaches a critical mass, Azerbaijan will launch a diplomatic, political, and military offensive, which in the medium term will lead to the restoration of its control over its entire territory and the withdrawal of Russian troops from Karabakh. This will be the final blow to the currently moribund idea of Miatsum, which will automatically put an end to the history of the “Third Republic of Armenia”.

To maintain its presence in the South Caucasus region, today, Russia has to accept great losses of resources and prestige, and material sacrifices. All this for the sole purpose of preserving the current statehood of Armenia in order for it to recast its ideological basis – but always in line with Russian foreign policy. Otherwise, the Kremlin understands very clearly that Moscow will finally lose the South Caucasus region.

The agony of the “Third Republic of Armenia” with Russia’s resuscitation efforts will continue until either a new and acceptable Armenian state ideology is developed in the Kremlin or for the Kremlin, or until the Kremlin runs out of opportunities to maintain Armenia’s statehood. It is very likely that the patient will not be saved, since the spirit of Miatsum, which was the driving force behind the existence of the “Third Republic of Armenia”, is not immortal and will perish with the current generation of Armenian politicians.

The early parliamentary elections in Armenia on June 20 are unlikely to change this situation. Unless, of course, Nikol Pashinyan, who most probably will win the elections, himself declares Miatsum as dead and that Karabakh. Although in the upcoming elections there is also the option for the public to decide that Pashinyan is part of the past and that his predecessors belong in distant history.

Oleg Kuznetsov is a professor at the Azerbaijan University of Languages. Since 2012, he provides consulting services to foreign legal entities in Russia on labor, migration, customs legislation, and deals with private legal practice. He is the author of more than 170 scientific and educational works and publications.