Despite some international backing to the PKK, it is still wrong to support the terrorist group. Here is why. 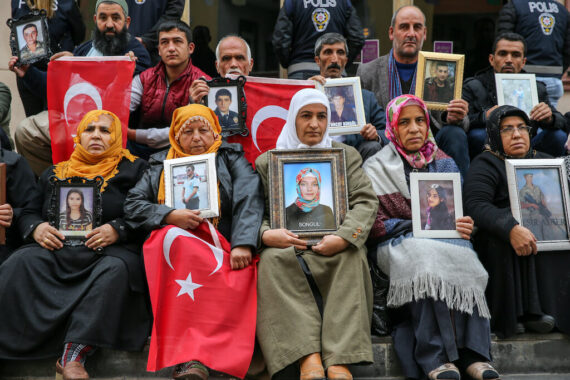 A photo shows the outside of the provincial office of the Peoples’ Democratic Party (HDP) as mothers and fathers joining sit-in protests for their children, in Diyarbakir, Turkey. Families join a sit-in protest in order to raise their voice to save their children from the hands of YPG/PKK. Photo by Ömer Yasin Ergin. Anadolu Agency.

Many different terrorist entities operate across the globe, each with their own agenda and strategies. Among their favorite tactics to survive and expand are taking advantage of the availability of safe zones, utilizing independent income sources, and gaining access to critical resources like oil, water, agriculture, or manpower.

However, to conduct acts of terror, such groups rely on access to weapons. Traditionally, terror groups obtain weapons via the black market while some can rely on supply coming from foreign states. For instance, the support of Iran to Shia militias in the Middle East functions as a strong catalyst that enables Iran to project power in areas where it could normally not reach.

The capabilities and the reach of terror groups exponentially increase with foreign backing. The PKK is, by far, one of the terror groups that enjoys the most foreign support. However, despite the considerable backing, the PKK still struggles to achieve sustainable success which indicates that the group might disappear if it loses its foreign support.

Foreign states’ support for the PKK ranges from active military support to economic aid and political backing. In this manner, the PKK does not lack the necessary aid. Without going too far back, this article will focus on the main aspects of foreign aid received by the PKK since 2012.

The PKK established the YPG as the military wing of the PYD and maintained control over three separate Kurdish enclaves in northern Syria along the Turkish border.

In 2012, the Assad regime faced a dilemma in Syria. It realized that it was not able to control all of Syria as it had to withdraw from large portions of territories to defend “valuable Syria” from Latakia to Damascus. However, such a withdrawal would mean that the Syrian opposition and Turkey would fill the void in Syria’s north.

Based on this, the Syrian regime handed over chunks of territory to the PKK. Until then, the terror group operated mainly in Syria and was politically under its Syrian branch, the PYD. At that time, the PKK established the YPG as the military wing of the PYD and maintained control over three separate Kurdish enclaves in northern Syria along the Turkish border.

Later on, in 2014, the YPG gained momentum. The battle for Ayn al-Arab (Kobane) resulted in the U.S. partnering with the YPG and supporting it via airstrikes and weapon supplies. Moreover, the U.S. also paid the salaries of YPG members, enabling the group to reach out to areas that the PKK could never dream of accessing otherwise. Today, the PKK/YPG controls the oil-rich regions of Deir ez-Zor and the two biggest dams of Syria, all inhabited by Arab tribes. The oil and electricity revenues combined with the taxes imposed by the YPG create a significant source of income for the PKK.

Moreover, the PKK earns large sums of money via drug trafficking and extortion money collected across European states. The PKK-affiliated organizations in Europe are vast and large. The PKK operates under fake NGOs, known to the intelligence services of the respective EU states, that undertake the terror group’s activities in Europe.

The PKK operatives sell drugs and collect extortion money from Kurdish businesspeople. While security forces occasionally combat these criminal activities, it is clear that they do not receive the same urgency as they would if they were conducted by Daesh/ISIS.

While the PKK’s main income sources are from direct foreign aid, income is also generated in foreign states, which turn a blind eye to PKK-affiliated organizations.

While the PKK’s main income sources are from direct foreign aid, income is also generated in foreign states, which turn a blind eye to PKK-affiliated organizations.

Moreover, the PKK also enjoys military protection by foreign states – nothing equivalent is seen in any other terror group. In the west and east of Syria, Russia provides military protection for the PKK/YPG in Tal Rifaat, Manbij, Ayn al-Arab, Ayn Issa, Tal Tamr, and Darbasiyah.

Read: Who Represents the Kurdish People?

Melek and Melik Aslan meet their son, Volkan Aslan who was kidnapped by PKK, after six years, in Diyarbakir, Turkey on February 18, 2020. With efforts of Turkish security forces, another family has reunited with their child, who they claim was kidnapped by PKK, listed as a terrorist organization by Turkey the U.S. and the EU, after six years of longing. Photo by Hasan Namlı. Anadolu Agency.

Additionally, the U.S. protects the YPG in the northeast corner of Syria stretching from the triangle between Turkey, Iraq, and Syria to the south of Deir ez-Zor. The PKK also enjoys military protection by Iranian-backed Shia militias in Sinjar, Iraq. When Turkey launched Operation Claw Eagle II against the PKK, the Iranian-backed Harakat Hezbollah al-Nujaba threatened to attack Turkey.

Furthermore, the PKK enjoys the support of foreign states in the form of soft power. This is mostly visible in the media coverage of the PKK. Most notably, the PKK is referred to as the “representative of all Kurdish people.” Even though there is no homogenous ethnic group in the world represented by just one entity and most of the Kurds oppose the PKK, the media continues to lump all Kurds under the banner of the PKK. Mainstream media outlets blatantly ignore the acts of terror by the PKK/YPG and give positive publicity to the two groups in line with the PKK propaganda.

For example, the PKK’s use of car bombings as a means of terror is widely ignored by western media outlets. If any other terror group had conducted over 170 car bomb attacks to kill civilians randomly, it would have been publicly condemned and ostracized. However, the PKK/YPG is not. Only sporadic and few references are made about these acts of terror. While these acts are ignored, the PKK/YPG propaganda of marketing women militia as “Freedom Fighters” is not.

Many books and articles have been written about the role of women in the PKK/YPG without any reference to their use as suicide bombers. Even Hillary Clinton, the former U.S. secretary of state, is part of a project to spread PKK/YPG propaganda by producing a TV series based on a book written about PKK/YPG female terrorists.

These examples are enough to conclude that the PKK is the terror group that receives the most foreign aid across the globe.

However, despite this immense support, the PKK is experiencing difficult times. It has lost its operational capacity in Turkey, and the mountainous areas in northern Iraq along the border region, which were used by the terror group to infiltrate Turkey, are now under Turkey’s military control. The PKK is limited to the Gara, Qandil, and Sinjar Mountains in Iraq, all of which do not have a territorial link to Turkey.

Despite all the support in Syria, the PKK/YPG has not managed to connect the three Kurdish enclaves it controls. Moreover, the YPG has lost one Kurdish enclave, and the Free Syrian National Army and the Turkish Armed Forces have put a wedge between the other two enclaves with Operation Peace Spring. While the PKK has faced large setbacks, more seem to be on the horizon as Turkey is reportedly preparing new military operations to cleanse Iraq and Syria entirely of the PKK.

In reality, if it were not for foreign aid, the PKK does not have any capacity or basis to continue to exist. With the amount of foreign backing it receives, any other terror group would have achieved way more than what the PKK has managed thus far. The stark contrast between the immense foreign aid and the PKK’s huge setbacks indicate that the terror group is the wrong horse to back.