The Moroccan-Turkish relations will be determined by the future of the Libyan conflict, Turkey’s relations with Morocco’s neighboring countries, and the development of trade and economic relations. 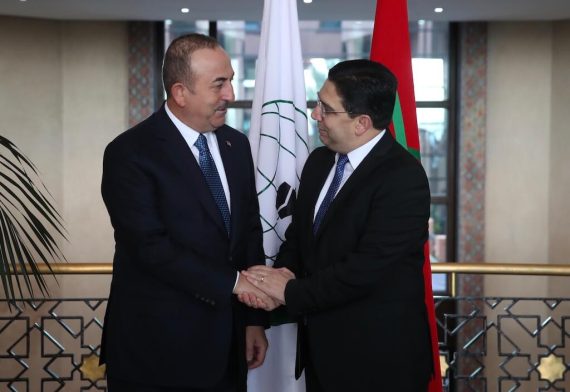 Foreign Minister of Turkey Mevlut Cavusoglu is welcomed by Moroccan Foreign Minister Nasser Bourita before the event marking the 50th anniversary of the founding of the Organization of Islamic Cooperation (OIC) in Rabat, Morocco on December 12, 2019. Photo by Fatih Aktaş. Anadolu Agency.

Morocco and Turkey have the potential to establish a promising political and economic cooperation, based on mutual respect and national interests. In addition to the shared cultural and religious ties, both are important geopolitical actors of the MENA region, the Mediterranean, and the Islamic world at large.

Over the past two decades, Morocco and Turkey have intensified their diplomatic relations and trade volume, sharing experience in many sectors such as migration, military cooperation, security affairs as well as the textile and construction sectors.

Turkey regards Morocco as an important partner given the dynamism of Morocco’s economy and the kingdom’s geographical location as a gateway to Africa. But there is also a competitive aspect to this relationship.

From 2011 onward, the Turkish-Moroccan relations indicate a state of reluctance to establish strong relations. Invited by the chief of the government in 2013, then Turkish prime minister Recep Tayyip Erdoğan visited Morocco, seeking a strategic partnership, but he was not received by King Mohammed VI. Moreover, Erdoğan was boycotted by the General Confederation of Moroccan Enterprises.

While the coalition government’s leading political party, the Party for Justice and Development in Morocco, had a strong cooperation with Turkey’s JDP (Justice and Development Party or AKP), the monarchy refused to have strong relations with Turkey. However, in December 2014, King Mohammed VI and his family were received by President Recep Tayyip Erdoğan at his home. It was a friendly and unofficial meeting.

In the summer of 2016, two years later, Morocco condemned the coup attempt against Turkish President Erdoğan and met the Turkish government’s demands to crack down on FETO (Fetullah Terrorist Organization) institutions in Morocco. As a response, in 2017, Morocco closed seven FETO schools and arrested many of those who are affiliated with the group.

As two regional powers that share common security interests and concerns in the Maghreb, Morocco and Turkey are both engaged in the Libyan conflict and called on all parties to reach a ceasefire. The Moroccan government supports and views the Government of National Accord (GNA) as the legitimate interlocutor while Turkey has also backed the GNA. However, Turkey’s military involvement in Libya in January 2020, caused a temporary rift between Rabat and Ankara.

The collapse of Libya is considered a security threat by both Turkey and the Kingdom of Morocco. The tenuous situation creates a security vacuum which various actors can take advantage of, including violent extremist groups, militias, and organized criminal groups. Nowadays, Morocco has been positioning itself as a key mediator in the Libyan peace process, promoting Libya’s sovereignty and supporting inter-Libyan dialogue.

Driven by mutually beneficial economic exchanges, relations between Morocco and Turkey show signs of a rapprochement, especially since the two have similar profiles.

Moroccan-Turkish disagreement over Libya was quickly resolved with both countries choosing to compartmentalize their dialogue, minimize conflictual issues, agree on the territorial integrity of Libya, and concentrate their efforts on economic agreements.

Driven by mutually beneficial economic exchanges, relations between Morocco and Turkey show signs of a rapprochement, especially since the two have similar profiles such as sharing borders with the European Union, rejection of separatist movements, and the desire for regional confirmation of their political and military superiority.

The Turkey-Morocco free trade agreement (FTA) signed on April 7, 2004, in Ankara, and entered into force at the beginning of 2006, provides a significant impetus to bilateral cooperation.

In 2018, the trade volume between Turkey and Morocco increased to around $2.7 billion, which is a positive indicator of the agreements made earlier. Despite the gradual increase, Morocco requested a review of some clauses of the FTA after its local industries and businesses suffered a loss, and the trade balance with Turkey experienced a deficit following the entry into force of the accord in 2006.

This imbalance is due to the similarity of certain sectors in both countries, such as textiles, leather, construction, public works, and distribution networks. In parallel, the Turkish investments in the Kingdom of Morocco were not materialized as expected. The volume of Turkish investments in Morocco does not exceed 1% due to the lack of the promotion of direct Turkish investment in the country, notably through joint-venture operations. However, to increase Turkish investment, Ankara should invest in new sectors such as the pharmaceutical industry, banking services, or insurance, in addition to the establishment of joint investment platforms.

In October 2020, up to 90% additional customs taxation was imposed on Turkish products for a period of five years. These additional taxes cover a total of 1,200 different products in different categories, led by the industry, food, and textile sectors.

The changes and additional taxation were implemented after a controversial 18 months. The Moroccan government thinks that the 2004 free trade agreement with Turkey has a negative impact on Morocco’s trade deficit. For Morocco, enhancing the free trade agreement to overcome impediments for equitable sharing of benefits is critical for sustainable cooperation and is necessary for a win-win perspective.

A Strategic Partnership to What Extent?

While Morocco and Turkey’s bilateral relations are based on common interests on security, migration, development, and territorial integrity, the former Saudi-Turkish confrontation affected regional stability and led to further geopolitical polarization in the Maghreb region. The long-standing rivalry between the two important powers of North Africa, Morocco and Algeria, has always been the determining factor in the steps of international and regional powers toward the region. Maintaining economic and political relations with both countries is an important factor in Turkey’s insistence on a neutral policy toward the region’s two important countries.

One of the most sensitive and important issues is the Sahara crisis. Here, Algeria is providing both financial and political support to the Polisario militias, and Turkey’s relationship with Algeria and its lack of clarity on this issue has led to tense relations between it and Morocco.

In December 2019, the state-owned Turkish television channel TRT World aired an interview with Sahrawi separatist Aminatou Haidar. Haidar’s critical discourse towards the Moroccan state triggered a wave of criticism by Moroccan media. The broadcast was considered blackmail after a call for a readjustment of a free trade deal with Turkey by the Moroccan government.

In economic terms, the visit of Algerian Foreign Minister Sabri Bukadoum to Turkey on September 1, 2020, and his commitment to offering important opportunities to Turkish investor companies, is an indicator of the rivalry between Morocco and Algeria in the Maghreb region and the African continent.

In order to respond to the increasing security and economic threats due to the failed and collapsed states in the neighboring countries and to the separatist and extremist movements, Morocco bought 13 Turkish Bayraktar TB2 combat drones on September 17, 2021. The drones are to help the Moroccan army strengthen its role as a regional military power able to thwart destabilizing threats in the region.

There are many areas where Morocco and Turkey have common interests and perspectives, especially regarding Libya and the sub-Saharan region. The Moroccan-Turkish relations will be determined by the future of the Libyan conflict, Turkey’s relations with Morocco’s neighboring countries, and the development of trade and economic relations. For economic and political reasons, maintaining good relations between Ankara and Rabat is likely to remain a priority for both countries.

Ali Zoubeidi holds a Ph.D. in Security Studies from Hassan I University, and an MA in International Studies and Diplomacy from Mohammed V University. He is a research fellow at the Settat University Security Dynamics Research Center. Dr. Zoubeidi is a senior consultant for social policies and interventions in smuggling of migrants, human trafficking, border security, transnational organized crime, security reforms, and human rights at the national and international level.