The Syrian Conflict 10 Years On: Who is in Control and What are the Possible Scenarios?

What is the future for Syria today? 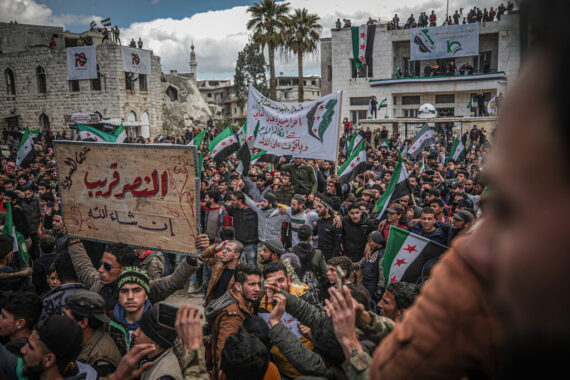 Ten years have passed since the protests began peacefully against the Syrian regime, and then soon turned into an armed conflict. Optimistic analysts believed that the regime would not survive for long, in front of pressure factors that all came together against it, between the pressure of the street at home and the pressure of the International community as well as the armed opposition.

However, after ten years, it seems that all those optimistic about the political change in the country have gone too far in their ambitions. Here is the Syrian president, preparing for a fourth presidential term, and he survived the conflict with unlimited Russian and Iranian support, at a time when the Syrian opposition failed to offer an alternative to the regime.

The Syrian revolution has entered its new year, burdened with a death toll of over half a million people while hundreds of thousands of missing. In addition to million of Internally Displaced Persons (IDPs) and refugees in the neighboring countries and Europe, while the destruction of the infrastructure and the depletion of the economy reaches a new level recently.

At a time when the Syrians inside and outside Syria renewed their demands for freedom and the overthrow of the regime, the Russian Foreign Minister, Sergey Lavrov, was presenting offers to the Arab Gulf states to appease them to provide support in the reconstruction and re-float of the Assad regime.

VIDEO: The Syrian uprising, 10 years on

The map of local actors and security

Security, stability, and early recovery are dependent upon one another in a political transition and reformation. As highlighted throughout history, security and stability are essential and were predominately achieved by instilling a new political order that removes the main sources of conflict. Syria is no exception, as the need for a political transition grows more urgent.

Although security and stability are a focus point for key stakeholders, the growing fragmentation and chaos has only expanded the various layers to attaining security. Also contributing, the prolonged political process, including the constitutional committee, have laid a confusing path with unclear outcomes that would lead to a stable political climate in the near future. The current outlook does not clearly outline when a secure and stable environment will be set for Syrians to return.

Based on responses from respondents residing in regime-held areas, the behavior of the security apparatuses affiliated with the Assad regime remains unchanged and persistent in utilizing the same detention and torture tactics as before 2011.

The general security situation in Syria continues to be highly volatile and fragmented mirroring the political, military, and economic instability. To varying degrees, each area is experiencing a host of challenges revolving around the social and economic repercussions from the continued war. Based on responses from respondents residing in regime-held areas, the behavior of the security apparatuses affiliated with the Assad regime remains unchanged and persistent in utilizing the same detention and torture tactics as before 2011.

The responses highlighted that the Assad-regime has even increased its brutality against civilians. The security apparatuses in regime, opposition, and SDF held territories are unable to fully control the behavior of individuals, entities, and groups under their respective command at varying degrees. This is mainly due to lack of accountability and corruption. Lack of professionalism by security-affiliated officials in opposition-held territories has contributed to the deteriorating security situation.

The following tables shows the size of the complexity in the map of the local forces in Syria and the way they deal with the international community, and this complexity is considered one of the basic issues about the fragility of the future of the political process in Syria, in addition to the persistence of security and military problems between the various areas of control.

The tables also shows that after 10 years of conflict in Syria, the various governorates suffer from the presence of an unofficial local actor such as ISIS cells, unknown organizations and they are mostly actors carrying out operations that directly affect the security reality and thus the future of Syria in various aspects.

The efficiency rate for each party is based on several interviews the author conducted with key figures in different control areas during the month of March 2021. By Navvar Saban

Federalism: The situation is based on the formation of a joint political entity consisting of three different local administrations, in the Idlib region, the eastern Euphrates region, and the regime-held areas in Damascus, in a manner that each maintains broad powers in its internal affairs. The most supportive of this scenario is Russia. Under this scenario, which was also based on the internal political experience of Russia, the PYD / YPG elements would be integrated into the regime’s army, so that the regime would secure control of all Syrian lands again.

The terrorist People’s Protection Units (YPG), which stated in talks that took place in 2017 between it and the regime, called for a “federal region under constitutional guarantees,” and also demanded self-administration, in exchange for its withdrawal from Arab-majority areas in the north of the country. It is known that both Russia and the regime described these talks as positive at that time.

Syria united with the guarantee of its territory alone:

​​This scenario is closer to the orientations of the Syrian opposition. Turkey has launched several military operations, against (ISIS) and against the PYD / YPG, in order to revive / maintain this scenario. It is not an exaggeration to say: The process of restoring Syria’s territorial integrity and restoring its national unity has become next to impossible. This is because the foreign military presence in the country on the one hand, and the plans of the world powers to map the region on the other hand, make the Syrian future hazy and unclear.

Moreover, the victory of the Democratic candidate, Joe Biden, in the presidential elections in the United States, will have a profound impact on the American scenarios for Syria. However, the policies of Biden, who served as Vice President under Barack Obama, and was part of the political and military chaos that Obama left in Syria, and of the United States’ foreign policy and approach towards Syria for the next four years, are a great mystery at the moment.