A minor change can be witnessed by the Biden administration due to increased sanctions on Damascus. 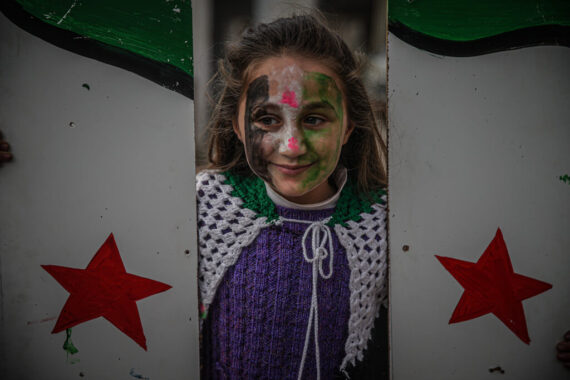 Syrians protest against Bashar al-Assad regime within the 10th anniversary of the Syrian Civil War in Idlib, Syria on March 15, 2021. Photo by Muhammed Said, Anadolu Images

Robert Ford, a former U.S. ambassador to Syria, said in a webinar that the United States under the Biden administration could deploy more troops to Eastern Syria, that withdrawal of troops is not subject to consideration, and that there will be a continued U.S. military presence in Syria. “There would be a continuation in discussing Syria, but a minor change can be witnessed by this new administration due to increased sanctions on Damascus.

The withdrawal of American troops can hurt the credibility of the U.S.,” he said. Ford went on to say that a slight change can also be seen regarding the refugee border policies as during Trump’s time in office not many refugees were accepted into the U.S., while Iraq and Syria will not be evaluated separately during the Biden presidency.

The webinar was hosted by SETA Washington D.C. on February 26, 2021 and examined the Biden administration’s possible policy towards Syria. Questions such as whether Biden would continue to interfere in Syria like his predecessors Trump and Obama or he would step back were among the topics of discussion.

The recent U.S. attack targeting pro-Iranian Shia militia in Syria was discussed by a number of experts, namely Robert Ford, a former U.S. ambassador to Syria; Dima Moussa, the vice-president of the Syrian National Coalition; and Wael Al-Zayat, the CEO of Emgage Foundation.

Dima Moussa asserted that uncertainty can be seen in Biden’s approach to the Syrian conflict as the Syrian issue is not present on the president’s priority list. She added that as far as the recent U.S. air strike against Syria is concerned, “an inheritance from Trump is seen for now.” She concluded, “We should wait a little bit more.”

Wael Al-Zayat started by noting that it is dangerous to make predictions pertaining to this issue which has been continuing for the last 10 years. “The U.S. again will spend a lot of time discussing the Syrian conflict under Biden’s administration. America’s connection with the SDF [Syrian Democratic Forces] will continue.

Robert Ford said that it would be better if Russia took control of the eastern part of Syria because Russia is closer to Damascus compared to Washington.

Robert Ford said that it would be better if Russia took control of the eastern part of Syria because Russia is closer to Damascus compared to Washington; that the KGB (the USSR’s Committee for State Security) and its successor, the Russian intelligence services, have been in close cooperation with Syria; and that the Iran-Syria relations have been closer than those of the U.S. and Syria. He added that that talks between Turkey and the U.S. are necessary.

Moussa said that the statement by former U.S. President Trump about the withdrawal of troops was a hollow proclamation because history has proven that the U.S. has never withdrawn from any territory it entered. The Syrian conflict will never be resolved if the U.S. pulls out its troops. According to Moussa, the U.S. should not step back and should continue to search for a solution to the conflict. Moussa stated her belief that the U.S. involvement in the Syrian conflict could be effective towards bringing it to an end. “If somebody is a part of a problem, it should have to be a part of the solution as well,” she said.

She added that a solution is not possible by military means but only by political ones. Iran, the EU, and other regional actors should convince Assad to enter negotiations. According to Moussa, an international consensus needs to be reached, Russia needs to be a part of this coordinated effort, and a thorough policy plan should be introduced by Biden.

Al-Zayat clarified that a humanitarian approach should be the Biden administration’s top priority.

Al-Zayat clarified that a humanitarian approach should be the Biden administration’s top priority. The most important issue is how to define Syria’s national interests. Civilian protection is necessary in Syria, he noted, adding that the U.S. should not be spending its budget on Syria. The United States is already facing multiple problems like COVID-19, climate change, social justice, etc. “That’s why Biden should be focusing on eradicating other problems first, and then start thinking about the Syrian conflict,” he said.

Ford expressed his belief that the U.S. should not deploy troops to Syria without a clear-cut mission. He claimed that only Syrians can resolve the conflict because it started between their government and themselves. Ford clarified that he does not think that Turkey, Russia, or Iran can resolve this issue and neither can the U.S. An inclusive national plan by Syrians for Syrians is needed. He claimed that “Joe Biden has an incredible talent. He can manage situations very well, if he wishes…Biden will be deeply involved in the military confrontation in Syria.”

Al-Zayat concluded by going against Ford’s proposal, adding that A Syrian plan does not seem realistic because several sects are present there and they do not want to solve this conflict by themselves. There is no doubt that the conflict emerged between Syrians…; however, they are no longer its major component.

As Joe Biden has not been in power for long, it is difficult to say anything certain regarding his approach to the Syrian conflict. Predictions can be made but uncertainty is bound to remain. However, before taking any step for the resolution of the conflict, including imposing new sanctions or increasing the number of troops, the U.S. must take into account the current problems, the hopes, and the expectations of the Syrian people – both those living inside and outside of Syria.