The Victory of Turkish Democracy

The turnout in the elections was higher than 85 percent, which proves the health of Turkish democracy compared to other democracies in the world. 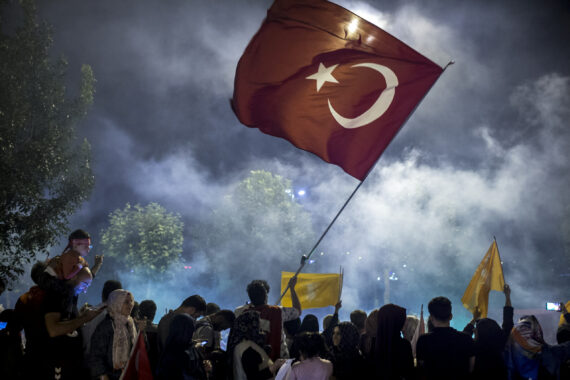 The MHP, the alliance partner of the AK Party, got 11.2 percent of the votes and passed the 10 percent threshold contrary to the claims of opinion polls. As a result, the People’s Alliance got the majority of seats in parliament. On the contrary, the Nation Alliance consisting of the CHP, the Iyi Party, and the Felicity Party faced with a disappointment because of the results.

The alliance could not get the majority in the parliament and none of the presidential candidates of this alliance succeeded in the elections. While the members of this alliance were aiming to push President Erdogan into a second-round runoff against Muharrem Ince, the presidential candidate of the CHP, the elections ended in the first round with the victory of Erdogan. Above all, the turnout in the elections was higher than 85 percent, which proves the health of Turkish democracy compared to other democracies in the world.

While the results of the elections are analyzed, it is seen that despite the sixteen years of experience in office, the AK Party is still the only party who can manage to get votes from various circles of society. Except from Igdir, Tunceli, and Hakkari, the party got MPs from all provinces, which show that the AK Party is the only party successful in bringing different groups together. Additionally, the party increased its votes in 17 provinces most of which are in Eastern and Southeastern regions of the country. Thus, contrary to some claims, the party still gets the great majority of votes from these two regions and Kurdish people support the AK Party governments in majority.

Nonetheless, the party experienced some decrease in its votes in the parliament especially in Istanbul, Ankara, Konya, Bursa, and Kayseri. During his balcony speech, President Erdogan stated that they had received the message of voters and would evaluate the results in order to understand the reasons lying behind this fall. In any case, the party obtained a significant victory in its 13th election in the last 16 years.

Another striking result of the election was the success of the MHP in parliamentary elections. While pre-election surveys were claiming that the party would get around 5-8 percent of the votes, the party got 11.2 percent and showed that it was still representing the center for nationalist voters. As its splinter party, the Iyi Party got 10 percent of the votes and fell behind the MHP. These results prove that despite all the manipulations and maneuvers of the Nation Alliance, the MHP can consolidate its voters in elections.

Last but not least, it is obvious that the CHP is the most unsuccessful party in the elections. The party faced with a sharp decline and lost approximately 4 percent of its votes. Because of the ongoing campaign among CHP voters, a significant amount of CHP supporters voted for the HDP in the parliamentary elections. The HDP substituted losses from Kurdish voters with the supports of the CHP and passed the threshold. Nonetheless, the results of the elections show that the CHP is in a crisis now and the gap between the party’s and Ince’s votes creates ambiguity in the future of the party. Thus, the results of the elections show that the leader of the CHP, Kemal Kilicdaroglu, is going to face challenges in holding the party’s chairmanship and controlling party organs in the next days.