May pointed her finger to Russia when she called out a Security Council member who she said has used its veto power as many times in the past five years as during the second half of the Cold War. 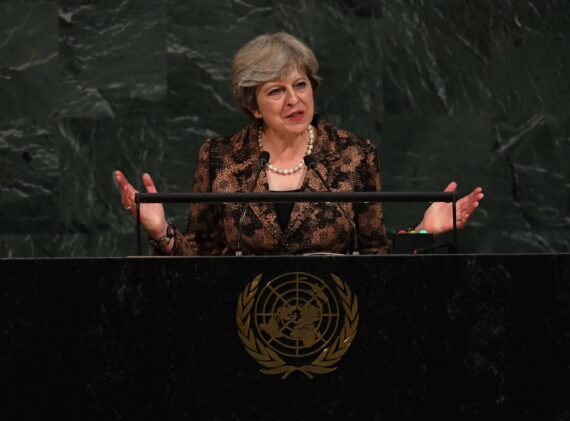 During her time at the UN General Assembly, British Prime Minister Theresa May urged for UN reform.

The Prime Minister threatened to hold back 30 percent of her country’s UN contributions unless the world body undertakes relevant reform.

“If this system that we have created is found to no longer be capable of meeting the challenges of our time, then there will be a crisis of faith in multilateralism and global cooperation that will damage the interests of our peoples,” May said before the General Assembly in New York.

The UK is the second largest UN funder and May stated that the withheld funds will be dispersed “only to those parts of the UN that achieve sufficient results.”

“Despite our best efforts, we are not succeeding. We must do more,” she said, urging for reform.

May praised the UN-centric international system, calling it “the amplifying force that allows countries to cooperate and live up to these standards in words, spirit and deed.”

However, in pointing out its shortcomings, May pointed her finger to Russia when she called out a Security Council member who she said has used its veto power as many times in the past five years as during the second half of the Cold War.

“In so doing, they have prevented action against a despicable regime that has murdered its people with chemical weapons,” she said. “As a result, in Syria, the United Nations has been blocked.”

During her stay at New York, Theresa May also raised the issue of Iran’s nuclear weapon program with President Trump.

The US President refused to share with world leaders his final decision on whether to scrap an international agreement made with Iran on its nuclear program, Rex Tillerson told reporters on Wednesday.

When asked by British PM to share his decision on the deal with Tehran, the US President accordingly “said no.”

Secretary Tillerson looked surprised when a reporter informed him that the President had already told the press that he had arrived at a final decision, signaling the disconnect between the head of state and a top diplomat – a problem the Trump administration has faced since the beginning of the President’s tenure.

Tillerson held the press briefing following a meeting with the parties to the deal, known officially as the Joint Comprehensive Plan of Action (JCPOA).

Secretary Tillerson further conceded that reports from the UN nuclear watchdog, the International Atomic Energy Agency (IAEA), “continue to confirm that Iran is in technical compliance with the agreement.”

He added that however in the broader context, “the aspirations” of the deal had not been met.

During his first UN address as President, Trump unleashed a stern rebuke of Iran, calling it a “rogue regime” and that the nuclear deal was “an embarrassment to the United States.”

Iranian President Hassan Rouhani retaliated during his address at the General Assembly on Wednesday by calling Trump a “rogue newcomer to the world of politics,” without naming him.

Also Read
How do Russia, Qatar and the United States Use Energy as a Foreign Policy Tool?