The Syrian Civil War, which has been raging for more than seven years, is entering a new phase, as the Assad regime is threatening to take over Idlib with Russian air support. This may very well be the end of the opposition as we know it since Idlib remains the last opposition stronghold. 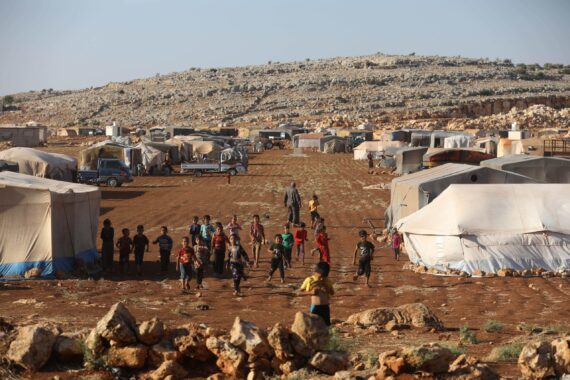 Children gather in a camp for the displaced from the south of Idlib province and the north of Hama province, in Kafr Dariyan situated at a short distance from Syria's border with Turkey, on August 26, 2018. Anadolu Agency

The Syrian Civil War, which has been raging for more than seven years, is entering a new phase, as the Assad regime is threatening to take over Idlib with Russian air support. This may very well be the end of the opposition as we know it since Idlib remains the last opposition stronghold. The Assad regime and Russia are making a case about the insertion of extremist elements to the city, conveniently ignoring the millions of IDPs that came to the region following the fall of Aleppo and other areas to the regime. In this phase of the conflict, the regime will seek to take the city at any cost, hoping to declare victory in the ravaged country. Once that happens, Russia will be able to argue that now is the time for the political process to move forward and reconstruction efforts to start. All this will happen at a huge civilian costs.

In many ways, Idlib has become a refuge not only for civilians but for opposition forces that have lacked serious support from outside, except for Turkey. The insertion of al-Qaeda affiliates, such as the HTS, into the region has helped the Assad regime to justify a military operation just like it has done in the rest of Syria. It’s a familiar pattern after all when the regime turns a blind eye to the movement of such groups at the beginning only to use them as justification for further military operations down the road. The international community has largely watched this pattern unfold over and over again, except for when the refugee outflows threatened Europe’s stability. It has not only failed to help the opposition but also delivered a message to the Assad regime that it can create humanitarian catastrophes with little, if any, cost.

With the latest news of Russian air bombardment and the potential operation of regime forces to the city, Turkey is ever more nervous about the humanitarian costs and the possible breakdown of the deconfliction zone it has helped to create. Turkey’s first preference was to work with its NATO ally, the U.S. to empower the opposition for a lasting political deal in Syria. Disillusioned with U.S. policy, however, Turkey has increased its diplomatic efforts toward the two major players on the ground, Russia and Iran, through the Astana and Sochi processes. An important result of significant value for Turkish strategic interests has been the creation of deconfliction zones. Turkey’s intervention to contain the PYD/PKK’s march toward the west was also not opposed by Russia and Iran.

The Assad regime’s impending Idlib operation carries the risk of alienation of Turkey from this diplomatic process, not to mention the potential confrontation between Turkish forces and the regime forces. If the Assad regime conducts an all-out assault on Idlib, Turkey will be hard pressed to protect its interests: maintaining the deconfliction zone, stemming the refugee outflows, containing the PYD/PKK, and continuing to engage with Russia and Iran diplomatically. If the opposition loses its control in Idlib to the regime, there may not be much of a need for a diplomatic process anyway. If and when the regime declares victory, Russia will try to pivot quickly to a debate on reconstruction rather than a political solution. Given the complexities of security and political interests of all political actors, it is difficult to imagine either a meaningful reconstruction effort or a sustainable political agreement will emerge any time soon. Under these conditions, Syria will not be stable for a long time to come regardless of what happens in Idlib.