Tunisian Politics at Crossroad with Kais Saied’s Vision of Governance

Behind the conflict lies President Kais Saeid’s hostile attitude towards the political system in general and the way in which powers are divided in Tunisia’s 2014 constitution. 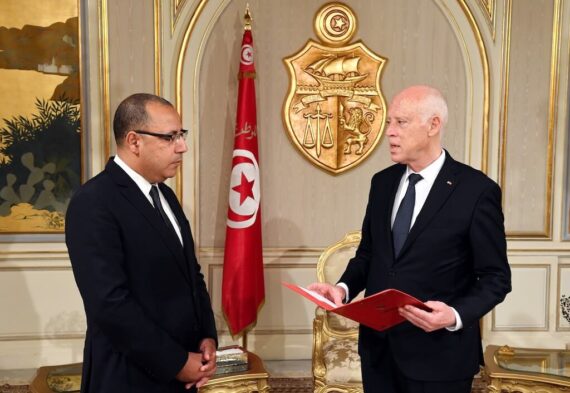 Let it be clear to the public: there is no doubt that Tunisian democracy has been in a serious crisis for some time, although this article focuses on the events of the first weeks of 2021.

On Tuesday, February 2, 2021, Tunisian President Kais Saied visited the Interior Ministry, then toured the capital’s main street and heard people chanting for him to dissolve parliament.

Two weeks prior, the president addressed a number of citizens at a café in a popular neighborhood on the outskirts of the capital, and posted a video of his meeting with them on the official page of the Presidency. In it, people can be heard calling for him to dissolve parliament and all political parties.

Prior to this, Mohammad Abbou a former minister who met with the Tunisian president had publicly called for the army to be deployed in the cities, claiming these extraordinary measures are needed to combat what he considers the corruption of the political class.

Read: Tunisia in a Predicament: Echoes of the Tunisian Revolution Lingering

Police officers block the road as people stage a demonstration demanding the release of detainees arrested in a protest held against the coronavirus (Covid-19) pandemic lockdown, at Habib Burgiba street in Tunis, Tunisia on January 23, 2021. Photo by Yassine Gaidi, Anadolu Images

There is now a serious constitutional crisis in Tunisia. On January 26, 2021, the Tunisian Parliament approved the inclusion of a number of ministers in the government of Hisham al-Meshichi with a large majority of nearly two-thirds.

However, President Kais Saied refused to swear them into office by allowing them to take the oath, a constitutional prerequisite for ministers to be able to carry out their duties officially.

This is an unprecedented dilemma, especially since the constitution has not anticipated that the president might refuse to confirm and deal with ministers approved by the constitutionally more powerful parliament.

Parliament Speaker and Ennahda President Rachid Ghannouchi said that in the future Tunisia should move towards a fully parliamentary system in which the president is a symbol of the state without any executive powers. His statement poured oil on the flames of the ongoing dispute between him and President Kais Saied and his supporters.

Behind this conflict lies President Kais Saied’s hostile attitude towards the political system in general and the way in which powers are divided in Tunisia’s 2014 constitution. Even before he was elected president, Kais Saied declared his aversion to partisan political representation, and refused to form any political party.

Saied is understood to support the idea and call for a new system of popular representation, similar to that of popular committees in Libya during the Gaddafi regime, and while details of that alternative system are not clear at the moment, Kais Saied’s supporters are absolutely clear in their demand that the entire executive branch be placed in the hands of the president, with the parliament being reduced to a mere watchdog.

People stage a demonstration demanding the release of detainees arrested in a protest held against the coronavirus (Covid-19) pandemic lockdown in Tunis, Tunisia on January 21, 2021. Photo by Nacer Talel. Anadolu Agency.

Throughout this political and constitutional crisis in Tunisia, Kais Saied has spoken with an undeniable self-confidence, and does not hide his negative and unfriendly view of the presidents of parliament and the government.

He constantly reiterates that he is ready to make “the right decision at the right time.” The majority of people understand the term “right decision” as dissolving parliament and preparing for new elections later in a new electoral system.

Public anger has turned to parliament because it is the one that gives legitimacy to Tunisian governments under the new constitution.

One might ask: why are people in Tunisia talking about dissolving parliament as if it were normal and acceptable? Isn’t the elected parliament the symbol of Tunisia’s democratic experience and the cornerstone of its political system in accordance with the country’s constitution, which was agreed upon after the revolution?

Unfortunately, the answer is that the failure of successive Tunisian governments since the December 17 revolution to achieve the social aspirations of the people, primarily employment and the fight against poverty, has made large segments of the population no longer care about the survival or demise of democracy. Public anger has turned to parliament because it is the one that gives legitimacy to Tunisian governments under the new constitution.

That second important reason is the growing anger towards the Ennahda party, the largest political force in the country and in successive governments over the past decade. Ennahda is a party with a sizeable backing, that came out on top at the 2019 legislative elections, winning 52 of the 217 seats. But for many of those who did not vote for it, their common denominator today is their desire to remove Ennahda from power.

Since Ennahda is the number one force in parliament today, and is seen as supporting the government of Hisham al-Meshishi with two other parties allied to it, the anti-Ennahda camp does not mind dissolving parliament as it means removing Ennahda from power.

For them, the democracy that put Ennahda in control of the country’s destiny and did not succeed in solving the country’s economic and social problems is not worth defending or shedding any tears over. Among them, of course, are the ideological enemies of Ennahda who cannot beat it in the polls, and believe that any other political order is better than one led by Ennahda.

Kais Saied knows all this and knows that he enjoys a broad popular support in Tunisia, more than Ennahda and any other politician in the country. He has also been able to find allies from within parliament, particularly through the Democratic Current party and the People’s Movement. He knows that if he dissolves parliament, the people will not shed any tears over it and he will not be attacked by influential media inside Tunisia.

Kais Saied also knows that although Democrats have regained power in Washington, governments such as France, Saudi Arabia, and the UAE will stand by him firmly if he makes such a move. His main problem, however, is that Tunisia’s current constitution does not allow him to dissolve parliament.

This scenario is not currently available to President Kais Saied, as the government of Hisham al-Meshishi has the support of nearly two-thirds of the members of the People’s Assembly.

Read: Overcoming the Political Crisis in Tunisia: National Consensus and the Role of the Ennahda Movement

The president of Tunisia therefore has only two options left: the first is constitutional and the other is unconstitutional. The constitutional choice is to be patient and wait for better conditions, such as the emergence of conflicts and divisions within the political belt supporting the current government, or for him to settle his differences with Hisham al-Meshishi and persuade him to submit his voluntarily resignation.

This may happen in the future or may never happen. The unconstitutional option is for President Kais Saied to announce the suspension of the constitution and then dissolve parliament. This is, of course, a clear and full-fledged coup d’état.

The sincere advice to the people and politicians is to be patient and to fix mistakes by democratic mechanisms. But we must always remember that all possibilities exist in a country that is new to democracy.