The US abandoning of the EastMed Project may pave the way to negotiation and even collaboration in the Eastern Mediterranean. 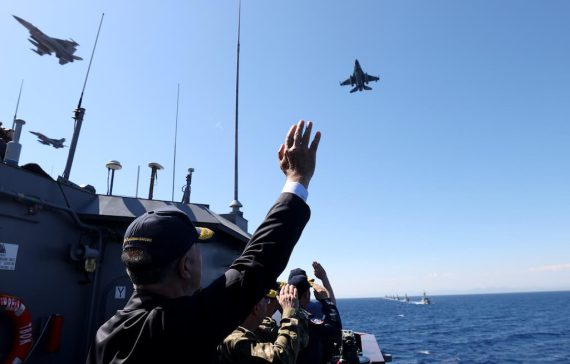 Ever since the Greek Cypriot Administration (GCA) signed an agreement with Egypt in 2003 on the delimitation of an exclusive economic zone (EEZ) in the Eastern Mediterranean and declared concession areas for the purpose of oil and gas exploration in 2007, a high tension has grown over the possible maritime boundaries and related activities.

The tension has primarily been between Turkey, Greece, and the GCA, and escalated with further delimitation agreements such as those between Lebanon and the GCA (2007), Israel and the GCA (2010), Turkey and the Turkish Republic of Northern Cyprus (TRNC) (2011), Turkey and Libya (2019), and Greece and Egypt (2020).

The Eastern Mediterranean Pipeline Project, known as the EastMed Project, has been one of these activities ever since it was initiated. First pronounced in 2016 by Greece with the EU’s encouragement and funds to finance the preliminary works (the EU pledged 36.5 million euros for research and technical planning), the project gained an official status with an intergovernmental agreement signed between Greece, Israel, and Cyprus (GCA) on January 2, 2020 in Athens, Greece.

The pipeline was planned to run for about 1,900 km, starting from a midpoint between Israel and the island of Cyprus in the sea,  in the Israeli section of the Levantine Basin, and eventually reaching Italy via the island of Crete and Greece with the Poseidon and IGB pipelines, a gas interconnector pipeline which connects gas supplies coming from both Bulgaria and Greece.

It was said that it would carry at least 11 billion cubic meters of gas per year and cost around 6 billion euros to construct. It is being developed by IGI Poseidon S.A., a 50/50 joint venture between the Greek gas company Public Gas Corporation of Greece (DEPA) and the Italian gas company Edison. The project is aimed to be completed by 2025.

The IGB pipeline project was regarded by the related or supporting states as not only a means of transporting the extracted gas from the Eastern Mediterranean to Europe but also a means of achieving strategic goals.

These strategic goals belong to Greece for a couple of reasons. Firstly, the IGB Pipeline Project is a means of establishing a partnership with regional states such as Israel and Egypt as well as non-regional states such as the United States and EU countries over the resources of the Eastern Mediterranean. The Greek Prime Minister Kyriakos Mitsotakis made a statement upon signing the agreement saying, “Today we did not simply sign a beneficial agreement. We sealed our resolve for a strategic connection between our countries in a region that now more than ever needs growth and security.”

Read: Cyprus in the Midst of Shifting Tides in the Mediterranean Gas Competition

Greece, just as the GCA, is motivated by its desire to establish a forum or “bloc” against Turkey over many bilateral issues, in general, and the Eastern Mediterranean disputes, in particular. This seems to be clearly perceived by Turkey as the country expressed strong objection to the project by pointing out its many associated “defects.” On the same day that the project agreement was signed, Hami Aksoy, the spokesperson of the Turkish Ministry of Foreign Affairs, stated, “The signature of the agreement on the EastMed natural gas pipeline project is the latest instance of futile steps, aiming to exclude Turkey and the TRNC in the region.

Any project disregarding Turkey, which has the longest coastline in the Eastern Mediterranean, and the Turkish Cypriots, who have equal rights over the natural resources of the island of Cyprus, cannot succeed… Refusing to cooperate both with us and the Turkish Cypriots in spite of this fact, is actually a direct manifestation of some countries’ pursuit of futile political motivations instead of cooperation.” It seems that Turkey prefers any transfer of gas to the European market to go through Turkey since, this would be “the most commercially feasible and secure route.”

Turkey has not only objected with statements, but has also reacted practically to deter activities associated with the project. Quite recently, on September 29, 2021, for instance, Turkey declared a new NAVTEX to prevent the activities of the Nautical Geo research vessel sent by the GCA to search the possible route for the EastMed gas line.

Turkey's drilling ship Fatih is anchored off the Tasucu Port in Silifke district of Mersin, Turkey on February 1, 2020. After completing his work in the Eastern Mediterranean, Fatih drill arrived in the Tasucu Port for the preparation of a new location and replenishment. Photo by Mustafa Ünal Uysal. Anadolu Images.

Egypt had already worked for the creation of the East Mediterranean Gas Forum on July 25, 2019 with the participation of seven countries, namely Egypt, Jordan, the GCA, Greece, Italy, Israel, and the Palestinian Authority, and further signed an agreement with the GCA on September 19, 2018 to construct a line linking Egypt and Cyprus’s Aphrodite gas field to Egypt’s gas liquefaction stations.

The Israeli reason for joining the forum seems to be commercial. On the signing of the agreement, former Israeli prime minister Benjamin Netanyahu said, “This is a historic day for Israel… Just days ago, we started pumping [the] Leviathan [gas field]… We have huge quantities there. This means a lot of money will come into the economy. That is good for peace because we have agreements with our Arab neighbors.”

Read: Will Turkey Delimitate Its Maritime Borders with Egypt and Palestine?

For the EU, the reason for joining the East Mediterranean Gas Forum was also commercial alongside the aim not to depend heavily on Russian gas. Competition to provide gas to Europe is fierce, as the continent seeks to rid itself of coal and high greenhouse gas emissions. Despite the various pipelines coming to Europe such as the Trans Adriatic Pipeline (TAP) or the shipments of liquefied natural gas (LNG) from the U.S., there is still a gap in the market.

The U.S. had been supportive of the East Mediterranean Gas Forum from the very beginning. Frank Fannon, then assistant secretary for the Bureau of Energy Resources (ENR), was present at a meeting in Athens in August 2019 when the project was agreed upon. The primary reason for the U.S. supporting the forum seems to have been to diminish the European countries’ dependency on Russian gas. It is also alleged that the U.S. has used the EastMed project to counter Turkey for some “unproved acts” such as its relations with Russia.

The U.S. withdrawal of support from the EastMed project

Despite the above-mentioned compelling reasons for supporting the project, recently, the U.S. has officially withdrawn its support from the project. In a statement by the U.S. Embassy and Consulate in Greece, it announced, “The United States continues to strongly support regional efforts that enhance and promote cooperation and regional stability, including the 3+1 mechanism in which the Republic of Cyprus (ROC), Greece, Israel, + the United States participate… We are shifting our focus to electricity interconnectors that can support both gas and renewable energy sources. We support projects such as the planned EuroAfrica interconnector from Egypt to Crete and the Greek mainland, and the proposed EuroAsia interconnector to link the Israeli, Cypriot and European electricity grids.”

Read: The Geopolitics of Turkey’s Gas Discoveries in the Black Sea

The U.S. State Department sources have been cited as saying that the EastMed pipeline project should be abandoned altogether. The inevitable question is why the U.S. decided to shift its focus away from the EastMed Project. To answer this, it is possible to identify a number of reasons.

One of the most frequently stated reasons is the fast-growing focus on green energy. Due to the universal trend towards green energy to meet the Paris Agreement on Climate Change targets (COP21), the future of fossil resources seems blurred beyond 2030. The abovementioned statement by the U.S. notes that “at a time when Europe’s energy security is–more than ever–a question of national security, we are committed to deepen our regional relationships and promote clean energy technologies. We are shifting our focus to electricity interconnectors that can support both gas and renewable energy sources.” The Biden administration is looking “critically at new fossil fuel infrastructure projects to ensure U.S. support is not directed to carbon-intensive sources and does not result in future stranded assets as we accelerate the clean energy transition.”

Similarly, the EU aims to reduce the use of natural gas in Europe by 25% by 2030 and for it to be abandoned completely by 2050. It is noted that even Israel announced that it will stop searching for natural gas and will focus on greater use of renewable energy sources (RES). In fact, Greece is doing the same, setting the production of 61% of its electricity from RES as a goal.

Thirdly, the U.S. seems to consider the project as the primary source of tension in the region. Increasing tension between, on the one hand, the U.S. and Russia, and on the other, the U.S. and China make the regional tensions difficult to bear for the United States.

Others see the withdrawal of the U.S. support as a commercial act. It is argued that the U.S. desire to promote its LNG to European markets might have encouraged the end of its support for the EastMed Project.

Turkey will be relieved as the intended “bloc” by Greece in the Eastern Mediterranean has lost a physiological element: the U.S. support. This support for Greece and the GCA will not be easy to regain. There is now a lot of criticism targeting the Greek government for this major foreign policy failure.

On a positive note, the U.S. abandoning of the EastMed Project may pave the way to negotiation and perhaps even collaboration for settling the differences over the disputes in the Eastern Mediterranean. This requires, first and foremost, negotiating and agreeing on mutually agreed maritime boundaries, which is a distant island.

The lack of U.S. support for the EastMed Project may inevitably shift the project towards passing through Turkey, which is said to be, at the very least, an alternative that is three times cheaper. This is possible as, on several occasions, Ankara has announced that the outstanding problems in the region should be handled through dialogue and negotiation and based on international law. Taken together, the latter may usher in the beginning of cooperation on the EastMed Project and other related issues between all involved states including Turkey.

VIDEO: Is the EastMed Gas Pipeline Project a Failure?