Turkey-Egypt Relations: Prospects for Normalization and Challenges Ahead 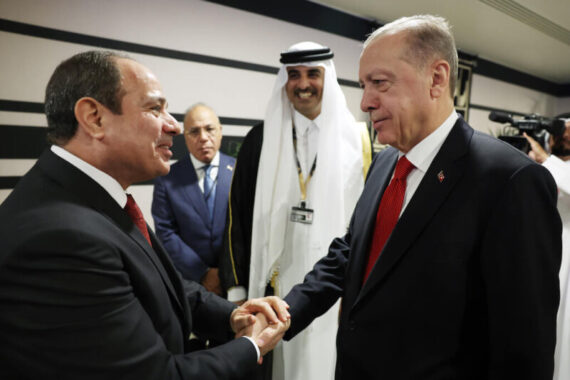 here have been remarkable developments in Turkey-Egypt relations, particularly since the beginning of 2021. The diplomacy and dialogue mechanisms of the bilateral relations between the two countries have quite a variety of variables and dimensions. In this context, despite the conflicting foreign policy priorities of both parties, the relations between Ankara and Cairo, which have a deep-rooted common history from a political, economic, and cultural perspective, progress in a balanced manner.

The exploratory talks held in May and September of 2021 played a major role in the formation of such a balance. The diplomatic contacts between the two countries, which began at the level of deputy ministers, had a symbolic value in terms of normalizing the relations that had been reduced to a minimum since 2013. The contacts, however, did not aim to achieve a final result in the short term.

Contrary to expectations, decisive steps were taken towards the solution of many problematic issues of the agenda of the two countries during this process, and the two parties achieved significant momentum. However, the parties’ divergent stances regarding Libya and the Eastern Mediterranean slowed down the normalization steps, and brought the relations back to a tense atmosphere. In this tense atmosphere, the handshake between Turkish President Recep Tayyip Erdoğan and Egyptian President Abdel Fattah Sisi, despite all the existing differences, at the opening ceremony of the World Cup held in Qatar in 2022, has raised hopes, once again, for a dialogue on normalization.

Turkey and Egypt closely followed the chain of events taking place in Libya after Muammar Gaddafi was overthrown as a result of the popular movement that started in 2011. The fragile nature of the local political dynamics and the ever-changing system of alliances in Libya have placed the two countries in opposite camps in the post-2014 regional competition. In 2019, the coup attempt by Khalifa Haftar, the leader of the eastern militia forces, against the capital Tripoli and the events that followed, led to the political rivalry between Ankara and Cairo over Libya to break out.

The Turkey-Libya Maritime Boundary Delimitation and Defense Cooperation Agreement signed between Ankara and the then Government of National Accord (GNA) of Libya translated into a close coordination and collaboration between Turkey and the internationally recognized and legitimate political leadership in Tripoli. One of the main reasons of Ankara’s increasing engagement with the political processes in Libya was to help defend Turkey’s national interests with regard to the competition in the Eastern Mediterranean.

As Turkey considered insecurity vis-à-vis its interests in Libya and the Mediterranean, it followed a more proactive and determined political approach. On the other hand, the possible takeover of the country’s administration by Haftar, who has a long record of numerous human rights violations and war crimes, was interpreted as a strong threat by decision-makers at the time. At this point, among the reasons that forced Turkey to act was the demographic, social, and economic damage that could have been caused not only in Libya but in the region and the world at large by the potential mass migration waves that could start due to possible violence against civilians.

Read: Will Turkey Delimitate Its Maritime Borders with Egypt and Palestine?

At the same time, Egypt, due to its wide borders with eastern Libya, remained indifferent to the formation and development of a homogeneous security apparatus in the Cyrenaica region, the so-called Libyan National Army (LNA) affiliated to Khalifa Haftar, and affiliated itself politically with Aguila Saleh, the head of the Tobruk-based parliament and the related political structure. Egypt’s desire to have an influence in the political developments in Libya is another reason for the Sisi administration’s engagement with political figures, armed groups, and tribes in the eastern region.

Egypt has strong commercial and economic relations with Libya. For years, the remittances brought into the country by Egyptians working in Libya were an important source of income for the Egyptian economy. In addition to security-based, political, and economic parameters, the regional alliance of which Egypt was a party pushed Cairo to implement more aggressive policies in Libya and the Eastern Mediterranean. The alliance with Greece and the Greek Cypriot Administration (GCA) made Egypt participate in regional formations with weak feasibility from the perspective of international law that undermined its possible gains in the Eastern Mediterranean with the conclusion of the Exclusive Economic Zone (EEZ) agreements.

Within this framework, following the signing of the hydrocarbon agreement between Turkey and the National Unity Government (MBH) in October, Egyptian Foreign Minister Sameh Shoukry announced that Cairo had suspended normalization talks due to Turkey’s stance on Libya. This agreement, which was crafted as an extension of the Maritime Deal dated November 27, 2019, is based on the principle of cooperation and benefit in maximizing the national interests of both Turkey and Libya, and it would be wrong to interpret it as a warning to Egypt.

On the contrary, the agreement reveals the possible gains that Egypt could garner in case of cooperation. As Turkish authorities have been asserting, since the start of the normalization negotiations, Egypt reaching an agreement on the maritime border could give it an area of 11,500 square kilometers. On the other hand, despite Egypt’s harsh reaction to the agreement, Turkey’s moderate approach still shows its determination and desire for normalizing ties.

The ongoing crisis between Turkey and Egypt was moved to the back burner after the leaders of the two countries shook hands at the opening ceremony of the World Cup held in Qatar in December 2022. Indeed, the picture that shows President Erdoğan and President Sisi shaking hands for the first time is not a sufficient indication on its own of the resumption of normalization talks. Due to its weight both in Libya and in the African continent, Egypt is an important factor for Turkey’s new foreign policy based on normalizing ties, which started with the Gulf countries, gained momentum with Egypt, and continued with Israel. However, success in diplomacy necessitates the willingness of both actors, and depends on strong communication channels and negotiations.

Some of the indicators suggest that Egypt has not fully demonstrated such determination. One recent example of such an action was the decree issued by President Sisi on December 20 in which the Cairo administration unilaterally determined the Western borders of Egypt with Libya, including the EEZ. It is argued that while this decision targets the hydrocarbon agreement that Turkey signed with Libya, it also shows that Egypt has no intention of making any concessions on the Libyan issue.

The decree was also not welcomed by the internationally recognized government of Libya. The Libyan Ministry of Foreign Affairs stated that with the unilateral declaration of the said borders, the territorial integrity and sovereignty of Libya were targeted, and the decree violated the principle of goodwill. Ankara’s reaction, on the other hand, came in parallel with its past balanced stance. In a statement made by Turkey, Libya and Egypt were invited to initiate dialogue and negotiations as soon as possible to determine the borders between the two countries in accordance with international law.

In sum, despite strong signs of normalization between Turkish and Egyptian political leaders, the challenges of the past are still relevant and threaten the prospect of normalization. However, it is important to protect the communication channels by keeping the existing problematic issues at a minimum level. In this sense, it is not difficult to see that Turkey exhibits a more rational and moderate approach to bilateral relations compared to Egypt.

Cooperation with Turkey in the region in the fields of political, economic, and security relations could bring important gains for Egypt, which is struggling with various internal and external problems. Accordingly, in addition to Egypt’s preferences in Libya and the Eastern Mediterranean, the political tone of the Sisi administration, will largely determine whether renormalization in bilateral relations will be possible.