The fight against FETO is not a fight of the judiciary alone, all state institutions and the entire society should be involved. 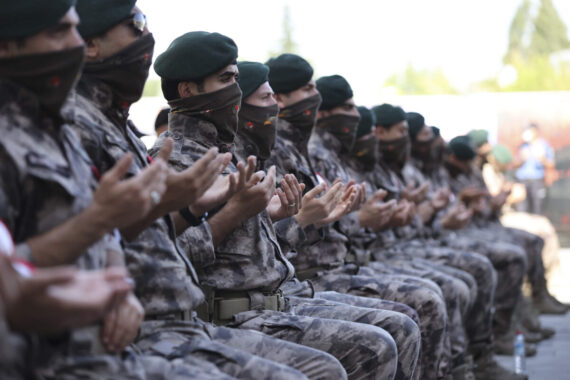 A commemoration ceremony is held at Ankara Police Department in honor of those who lost their lives in July 15 defeated coup attempt orchestrated by Fetullah Terrorist Organization (FETO) to mark the fifth anniversary in Ankara, Turkey on July 15, 2021. Photo by Doğukan Keskinkılıç. Anadolu Agency.

Five years have passed since the coup attempt on July 15, 2016. The Turkish government has waged an effective fight against the Fetullah Gulen Terrorist Organization (FETO) which was nested in the state structure and orchestrated the coup attempt. Although critics argue that the fight is only on the judiciary’s shoulders, it has achieved a significant progress. As the July 15 coup attempt was in many ways different from the past coups and coup attempts in Turkish political life, a different assessment and long-term planning are required in the fight against the coup plotters.

Turkey’s coup history begins with the May 27, 1960 military coup, which was committed by a junta committee (National Unity Committee) nested in the Turkish Armed Forces (TSK) and supported by civilian elements, such as media, politics, and universities that were close to the committee. The March 12, 1971 military memorandum, the September 12, 1980 military coup, and the February 28, 1997 postmodern military coup were all carried out within the TSK hierarchy.

On the contrary, the military junta, composed of FETO members infiltrated the army in previous decades and carried out the July 15, 2016 coup attempt, was not only part of the TSK’s military hierarchy, but also they were in close collaboration with the civilian members the FETO working within and outside of the state institutions. Furthermore, it was executed by soldiers, who were in command of the civilian members of the organization. Such unique nature of the coup has been decisive for how the struggle is being carried out against the organization.

Read: Why should not the West love the Gülenists?

Let’s have a look at the legal cases. According to the findings of the proceedings, Fetullah Gulen and the civilian imams under his command (Adil Oksuz, Kemal Batmaz, Nurettin Oruc, Harun Binis, and Hakan Cicek) were the masterminds behind the coup attempt that was conducted mainly by brigadier generals and lower rank military officials. From its planning to its execution, the above individuals were in contact with Gulen himself in every single phase orchestrating the process.

Considering FETO’s extensive human web that found its way into state institutions, its clandestine structure, incognito activities in the civilian sphere, fight against the coup plotters could not be confined to the coup perpetrators only. A dismissed police chief coming out of a tank and steering towards the Istanbul Police Department, and computer specialists accompanying soldiers heading to Türksat are striking examples. For this reason, a judicial process exclusively for the trial of the soldiers who participated in the coup attempt would not have been sufficient.

What is more, the investigations conducted following the coup attempt have revealed that FETO’s infiltration of the TSK had reached almost 80 percent of certain rankings. The ongoing operations against the organization confirm this. Another point is that members of the organization has been infiltrating the TSK for about 40 years through extremely insidious methods, and this infiltration has snowballed throughout the years.

While the fight against FETO continued, the organization did not hesitate to engage in acts of terror.

As a result, for the last five years in addition to the trials of those who joined the coup attempt, fighting this clandestine structure within the TSK along its civilian organization became necessary. While the fight against FETO continued, the organization did not hesitate to engage in acts of terror, such as the assassination of the Russian ambassador to Ankara Andrei Gennadyevich Karlov.

To date, the courts of first instance reached a verdict in 288 of the 289 coup cases that have been filed. A significant part of the cases has also undergone appeal reviews in regional courts of justice and is at the appeal phase in the Court of Appeal. The court, on the other hand, has already approved of 79 cases finding them in compliance with the law. Therefore, as can be seen, significant progress has been made in the coup cases, which are in their fifth year and the judicial processes are steadily approaching an end.

The Coup Cases Nearing an End

Before the removal of FETO members from state institutions, and investigations into the organization’s members, the most urgent issue for the judiciary was to determine and prosecute those who participated in the coup attempt. A fast, effective, and just approach to the de facto coup cases was imperative, and the trial and punishment of the coup plotters was necessary. The direct targeting of the public, killing 251 people, and injuring over 2,000 during the coup attempt escalated the rage against the coup plotters, and an immediate trial process was expected as a result. In order not to overshadow the trials, given the importance attached to their immediacy and effectiveness in this 5-year period, utmost attention was paid to the rights of defense and a fair trial.

In the post-July 15 period, judicial processes against FETO may be discussed under two headings: the de facto coup cases in which the participants of the coup attempt appear before judges and the proceedings filed against FETO members. These cases continue in almost all provinces and towns in Turkey that have high criminal courts. The de facto coup cases have been filed in the cities where the military activities took place on the night of July 15, 2016.

A drone photo shows Turkish flag waving in the sky as a symbol of independence and victory ahead of the fifth anniversary of the July 15 defeated coup attempt, in Istanbul, Turkey on July 14, 2021. Photo by Muhammed Enes Yıldırım. Anadolu Agency.

According to the latest data revealed by the Anatolian Agency at the time when this article was written, the courts of first instance reached a verdict in 288 of the 289 coup cases that were filed. A substantial part of these has been examined by regional courts of appeal and are at the phase of appeal at the Court of Cassation. The court, on the other hand, has already approved 79 cases finding them justifiable. It, therefore, becomes obvious that significant progress has been made in the coup cases.

The Latest Developments in the Two Main Cases

The two most important cases are the Akıncı Base Case and the General Staff Case. The Latter focuses on the members of the military wing of FETO, who planned and carried out the coup as well as the actions that took place at the General Staff. With the verdict announced in the General Staff Roof Case on June 20, 2019, the military executive staff of the coup was sentenced to multiple aggravated life imprisonment for the crimes of violating the constitution, and deliberate attempts to assassinate the president. During the appeal examination, the Ankara Regional Court of Justice reached the verdict that the decisions of the court of first instance were in accordance with the law. The file is currently pending at the Court of Cassation.

In order to obtain information about the defendants who were tried in the General Staff Case, the allegations, the evidence, the defense of the accused, and especially the TSK organization of FETO, one can refer to the detailed report by SETA.

Read: The Status of the July 15 Coup Trials

In another cardinal case, the Akıncı Base Case, the first-degree phase was completed with the announcement of the verdict on November 26, 2020. This is considered the most critical case as it tackles the events that took place in the administration base of the attempted coup and the civilian imams who were the real plotters behind the attempt. At the end of the first-degree trial, the so-called civilian imams of the organization Kemal Batmaz, Hakan Çiçek, Harun Biniş, and Nurettin Oruç were each sentenced to 79 aggravated life sentences for “attempting to overthrow the constitutional order,” “assassination of the president,” and “premeditated murder.”

In addition, many defendants tried in this case were also sentenced to a total of 79 aggravated life sentences for the same crimes. Those convicted included İncirlik 10th Tanker Base commander, former brigadier general Bekir Ercan Van; former brigadier general Kemal Mutlum, who tried to seize the Air Force Operations Center; former brigadier general Aydemir Taşçı, who was the head of the Air Force Intelligence; former colonel Veysel Kavak, who was the secretary general of the Air Force Command; the 141st Fleet commander of the period, and the former four-star general and commander of the Turkish Air Force Akın Öztürk’s son-in-law former lieutenant colonel Hakan Karakuş; former pilot lieutenant colonel Hasan Hüsnü Balıkçı, who bombed the Turkish Grand National Assembly; former major Mehmet Fatih Çavur, who made the first flight in a F-16 over Ankara in the coup attempt; former pilot captain Hüseyin Türk who bombed the Turkish Parliament, TÜRKSAT, and the Police Special Operation Department; and former captains Mustafa Mete Kaygusuz and Ahmet Tosun, who sent the bombing instructions to the F-16s.

The Akıncı Base Case is currently before the Ankara Regional Court of Justice for appeal review. It is expected that the appeal phase will be completed and a decision will be made within this year.

As can be seen, it is possible to say that the proceedings of the coup cases that have been taking place in the last five years are approaching an end. In this process, the judiciary had to decontaminate itself, continue its routine judicial activities, and conduct FETO coup cases. Despite all these difficulties, it succeeded in overcoming complex and difficult litigation processes with multiple defendants.

It is necessary to wait a while for the completion of the legal processes. After verdicts are reached in the cases at the first instance courts and even in the appellate and appeal stages, the process will continue with individual applications to the Constitutional Court and finally to the European Court of Human Rights (ECHR). The judicial processes will continue for a long time and should be undertaken with decisiveness and sheltered from languor. Unfortunately, after the July 15 coup attempt, the interest and support toward the start of the trials faded. The fight against FETO is not a fight of the judiciary alone, all state institutions and the entire society should be involved to ensure achieving successful results.