Al-Bashir is of Afro-Arab Syrian origin, and her involvement in a terror attack was intended to provoke the Turkish public. 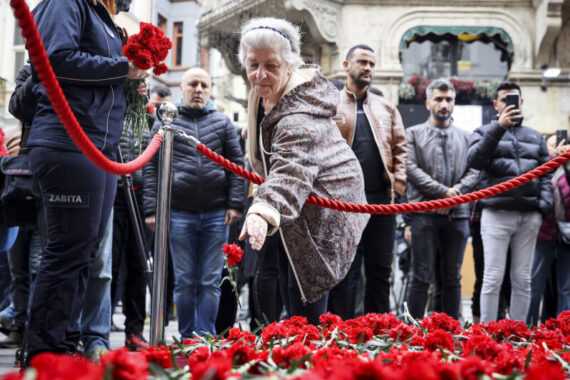 A woman lays carnations to condemn the deadly terror attack that took place on Nov. 13 at Istiklal Avenue in Istanbul, Turkiye on November 14, 2022. Photo by Anadolu Images

he international community experienced yet another terror shock on November 13, 2022; this time, the target was Istanbul’s most popular and crowded pedestrian avenue, Istiklal Street. Six people died and 81 others were wounded. Turkey is a country, which has been struggling to eliminate terror of all kinds for five decades. Contrary to the arguments by some analysts who repeat the old customary narratives about most terror attacks, this attack has unique differences compared to preceding ones.

The Istiklal Street terror attack directly and indiscriminately targeted civilians, proving the Western perception of the “moderate” PYD utterly false. To combat ISIS (Daesh), the United States and its European allies promoted the PYD by supplying weapons and nurturing the positive image of a group dedicated to legitimate ideals.

James Jeffrey, (former) the United States Special Representative for Syria Engagement and Special Envoy to the Global Coalition to Defeat ISIS, had ‘once’ tried hard to legitimize the PYD and persuade Turkey to tolerate its presence in Northern Syria. Brett McGurk, the former Special Presidential Envoy for the Global Coalition to Counter ISIS at the U.S. Department of State, keenly protected and rebranded the PYD.

Read: Turkey’s Slow-Motion Encircling and Elimination of the YPG

The “Syrian Democratic Forces” (SDF) was the new name given to the PYD after the inclusion of several Arab tribes to show its alleged plural structure. The U.S. officials, mainly CENTCOM staff and McGurk, currently the U.S. National Security Council Coordinator for the Middle East and North Africa, promoted the SDF as a secular organization to counter ISIS, denying their link to the PKK, which the U.S. recognizes as a terrorist organization.

The Istiklal Street terror attack both proved the PYD’s use of terror and revealed its organic affiliation to the PKK. The apprehended terrorists, primarily Ahlam Al-Bashir, confessed that the PYD trained her as a “special intelligence agent” in Manbij, where it planned this terror attack under the directives of the PYD leadership, and she then moved to Idlib before infiltrating into Turkey through the Regime-held areas. In other words, the huge network of a terror group is mobilized in Northern Syria’s PYD-controlled areas and its extensions in Turkey.

Al-Bashir’s confession of her relationship with the PYD is significant for understanding how the U.S. government is providing operational, intelligence, logistical, and ideational support to the terrorist group through American taxpayers’ money. The “18 U.S. Code Chapter 113B: TERRORISM” defines terrorism as follows:

Read: The EU and the PKK: Hypocrisy and Double-Standards at Large

(B) appear to be intended—

(i) to intimidate or coerce a civilian population;

(ii) to influence the policy of a government by intimidation or coercion; or

(iii) to affect the conduct of a government by mass destruction, assassination, or kidnapping; and

(C) occur primarily outside the territorial jurisdiction of the United States, or transcend national boundaries in terms of the means by which they are accomplished, the persons they appear intended to intimidate or coerce, or the locale in which their perpetrators operate or seek asylum…

Without a sliver of doubt, the Istiklal Street terror attack fits into this definition and is a clear violation of the U.S. code. It seems that the U.S. government will soon have to come to a decision: maintaining its solidarity with Turkey to defeat global terrorism or continuing to ally with a terror group and facing the responsibility of breaking its own legal code. There is also the interesting aspect of the American threat perception which on the one hand, perceives Iran and Russia as hostile and, on the other, tolerates the partnership of the PKK/PYD with Russia and Iran.

A further debate would be about the strategy of the PYD/PKK—the group appears under different names such as SDF, YPG, KCK, and others. This terror attack had subliminal objectives that could expose the terror network’s agenda. Let’s have a closer look.

The perpetrator of the Istiklal Street terror attack, Al-Bashir, seems to have been selected deliberately for this activity. For years, the PYD has been promoting its female members as “freedom fighters” with the male-dominated leadership urging female members to commit suicide bombings. If the Turkish security forces had neutralized Al-Bashir, the PYD would have circulated her image as yet another figure killed in a “heroic act.”

More importantly, Al-Bashir is of Afro-Arab Syrian origin, and her involvement in a terror attack was intended to provoke the Turkish public, already alerted by the huge number of Syrian refugees in Turkey. A Syrian committing a terror attack has a potential to sharpen people’s ethno-nationalist sentiments ahead of the June 2023 general elections. Thus, the AK Party government could be seen to be entrapped between its open-door policy to Syrians and sustaining the safety of Turkish citizens. Meanwhile, the opposition would have escalated the anti-Syrian rhetoric to gain votes, and the PYD would have ignited social unrest in Turkey by playing Turks off against Syrians, leading to the break of ties between the Syrian National Army and Ankara.

An arrested individual whose name was not revealed by the security forces confessed that they were planning to transfer Al-Bashir to the PKK’s Lavrion compound in Greece. The PKK/PYD leadership, he acknowledged, instructed them to execute Al-Bashir and bury her in or around Lavrion to eradicate the perpetrator’s footprints. This confession reveals a lot, namely:

Another feature of the PKK/PYD’s preference for Al-Bashir is her identity. The PKK/PYD chose Al-Bashir due to her identity as a Syrian woman. As a reaction to ISIS and with Western backing, the PKK/PYD has become a hub for recruitment. People who have suffered under ISIS hand over their alliance to the PKK/PYD, which is a Marxist organization whose spread of ideological radicalism will replace religious radicalism, reminding us of the terror wave of the 1960s-70s. The probable collapse of the global economy and its consequences on people will polarize communities between Marxist and religious ideological lines. If not stopped, a Marxist terror network will start challenging the existing patrons to build its own system of ideas in Northern Syria.