Turkish Ministry of National Defence announced that the withdrawal of heavy weapons from the demilitarized zone of Idlib was completed. The announcement underscored that “operations were ceaselessly underway to establish sustainable and enduring peace in Idlib within the framework of the consensus reached in Sochi.” 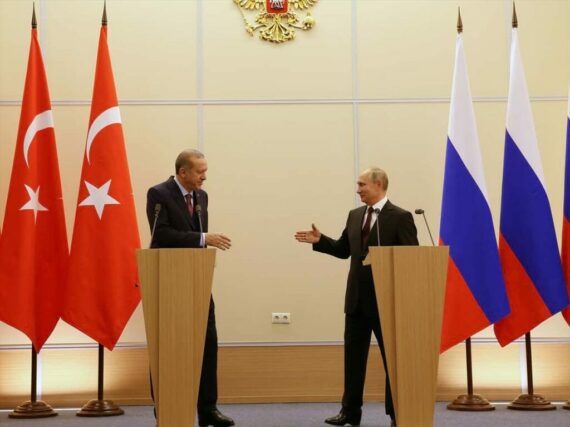 Yesterday the Turkish Ministry of National Defence announced that the withdrawal of heavy weapons from the demilitarized zone of Idlib was completed. The announcement noted that the Syrian opposition and other anti-regime groups had withdrawn heavy weapons from the demilitarized zone and underscored that “operations were ceaselessly underway to establish sustainable and enduring peace in Idlib within the framework of the consensus reached in Sochi.”

The announcement from Turkish Defence Ministry came after Lavrov discussed the progress in demilitarization of Idlib at a news conference in Moscow. Underlining that Turkey plays a pivotal role in the creation of a demilitarized zone, Russian Minister of Foreign Affairs, Sergey Lavrov voiced confidence of the Idlib demilitarization process, noting that it was progressing well.

These reciprocal remarks come as the October 15 deadline for the completion of the demilitarized zones is drawing closer.

Sergey Lavrov told reporters in a news conference that: “The deadline for demilitarized zones to be fully functional expires on October 15. A day or two do not play any role, in any case, the quality of these works is more important”.

Turkey and Russia had agreed to jointly establish a demilitarized zone in Idlib which is seen as the last remaining stronghold of Syria’s opposition. The leaders of the two countries, President Erdoğan and President Putin met at Sochi in September and reached a consensus on the demilitarization process of the Idlib region.

The memorandum of understanding signed between the two countries called for the stabilization of Idlib and aimed to eliminate the threat of terrorism by forbidding acts of violation. The agreement stipulated the establishment of a  disarmament zone spanning 15-20 km in Idlib.

The pact had maintained that the opposition groups in Idlib would remain where they were currently located, while Russia and Turkey would jointly conduct patrols in the area to prevent potential new conflicts.

Mutual voicing of this renewed confidence by the two countries provides a positive outlook for the region ahead of the 15 October demilitarization deadline. With Syria only just starting to emerge from the atrocious conflict that was launched in 2011, with increased concerns over the refugee crisis haunting European leaders, some of whom are discussing the potential of shutting down airports after having shut down sea ports and turned away many boats carrying refugees midway in the Mediterranean sea and with Turkey taking the real lead in responsibility of the refugee crisis with over 4 million refugees, maintaining stabilization in Syria is of utmost importance for all the parties concerned.