Turkey has become Somalia’s prime partner in the security sector alongside the EU mission in Somalia and the United States. 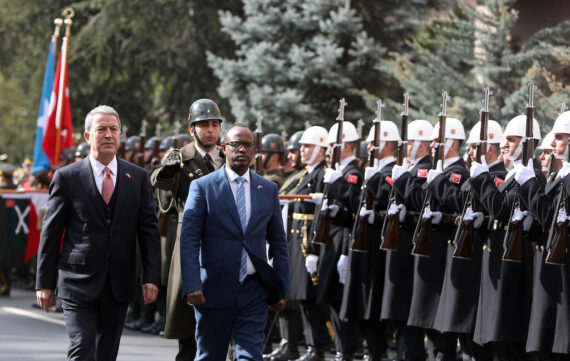 August 2021 marked a decade of multifaceted cooperation between Somalia and Turkey. The 10th anniversary of this sophisticated diplomatic engagement was celebrated both in Mogadishu and Ankara with ceremonies and conferences that evaluated and reflected upon the developments and outcomes of this relationship during the last ten years.

Turkey-Somalia relations have raised eyebrows in international politics and regional geopolitics, and consequently received an array of praise, scepticism, and scrutiny. Nevertheless, the two countries have maintained well-coordinated diplomatic relations.

What is the nature of Turkey-Somalia relations? What role is Turkey playing both in Somalia’s state-building and capacity-building processes? How has this relation reconfigured the geopolitics of the Horn of Africa region?

In 2011, Somalia and the whole East Africa region were facing one of the most calamitous famines in decades. Given Somalia’s feeble state capacity and the threat of Al-Shabaab terrorism, the country’s population was hard hit by the famine. Starvation and death alarmed international humanitarian organizations and the world at large. Images of malnourished Somali women, men, and children flooded the global media.

Erdoğan’s visit was crucial in concerting and hastening international efforts to assist Somalia in the famine. The visit itself become a powerful symbol of Turkish humanitarianism and willingness to engage with African countries who were poor and lacking state capacity in handling both manmade and natural disasters.

The visit brought with it Turkish humanitarian organizations and numerous NGOs that played substantial roles in mitigating the famine. In this manner, August 2011 marked the beginning of a long diplomatic engagement between Somalia and Turkey, which has become Turkey’s foreign policy flagship in Africa.

However, Turkey-Somalia relations did not actually start in 2011. The relations between the Somali people and Turks go back to the Ottoman era, during the Adal and Ifat Sultanates of the 14th and 15th centuries. The Somali sultanates co-operated militarily with the Ottomans to ward off Portuguese invasion and colonization.

This aside, 2011 became a turning point in Turkey-Somalia relations for many reasons.

Today, Somalia has doctors and nurses who graduated from Turkish universities and have played significant roles in Somalia’s efforts against COVID-19 and the shortcomings in the health sector. Moreover, most of the students who graduated have become junior bureaucrats and government workers, the most famous being the current Minister of Justice Abdulkadir Muhammad Nur.

In 2015, a brand-new hospital, Recep Tayyip Erdoğan Research Hospital, was inaugurated in Mogadishu. Over the years, the Turkish Cooperation and Coordination Agency (TİKA) has renovated numerous hospitals and health facilities across the country that were dilapidated from the civil war.

More crucially, Turkey has become Somalia’s prime partner in the security sector alongside the European Union mission in Somalia and the United States. Turkey’s military base in Mogadishu, Camp TURKSOM, saw the graduation of its third class of military cadets in August 31, 2021. The camp has trained approximately 10,000 military officers since its establishment in 2017. What is more, Turkey is training the Somali Haramcad Special Police Unit and Gorgor Commando Brigade in Turkey – both bodies have dealt heavy blows to the Al-Shabaab terror group.

Read: From Cooperation to Conflict: The UAE’s Deepening Crisis with Somalia and Djibouti

In the last decade, Turkey has achieved its substantial goals of capacity-buildings in Somalia while simultaneously closely considering regional politics and geopolitical sensibilities.

Both Turkey and Somalia treaded a tight rope geopolitically in enhancing their diplomatic and strategic interests. Turkey’s diplomatic overtures in Somalia, Ethiopia, and Sudan brought the country into the fields of interests of the U.S., the UK and, the Gulf states leading to strategic encounters and confrontations.

The Turkish military base in Mogadishu was perceived as an entrance of a new power into the geopolitically strategic Horn of Africa and Red Sea region – a region that already hosts American, French, Chinese, and British military installations.

Consequently, the different Somali governments in the last decade have faced both implicit and explicit pressure regarding their diplomatic relations with Turkey. The debacle that surrounded the UAE military base in Somalia crisis is just one example, and resulted in the Emiratis suspending all military and social assistance to Somalia.

However, all the Somali governments that came to power maintained strategic balancing acts in their diplomatic relations with Turkey. In my opinion, they are cognizant of their own strategic interests and objectives, and consequently calibrated their foreign policy accordingly. Hence, Somalia maintained strategic relations with Turkey, the U.S., the UK, China, and Saudi Arabia in the security sector and military capacity-building, and avoided diplomatic tensions in the region.

What does the future hold for Turkey-Somalia relations?

The Somali diaspora, which was traditionally based in Europe and North America, is increasingly investing and relocating to Turkey, indicating deep-rooted, people-to-people good relations between the two nations – another aspect of the efficacy of Turkish cultural diplomacy towards Africa. Hence, Turkey-Somalia relations are deepening in numerous fronts from state-building to security, and education to cultural and diaspora mobility.

Nevertheless, the recent Taliban takeover in Afghanistan should ring warning bells for Somalia’s strategic partners including Turkey and the United States. While a Taliban-style takeover of Somalia by Al-Shabaab is unlikely given their diminished military capabilities, it is still worth being cautious.

Somalia’s military and security sectors are recuperating, and enhancing their capabilities against terror groups. It is time Turkey and other partners focus their attention on other sectors such as governance and state institutional building processes. In the next decade, Turkey-Somalia relations will be defined by Turkey’s role in Somalia’s governance, democracy, and state institutions.

Turkey should promote good and accountable governance, rule of law, and checks and balances within state institutions to render state-building processes successful and sustainable. A corrupt client state in Mogadishu will evaporate à la Afghanistan in the face of public despair and armed non-state terror groups.