Turkish parties in unity against referendum

While Turkey had already started its military maneuvers in the southeastern Silopi region on September 18, a week ahead of the referendum, announcement of a joint exercise came after the vote took place. 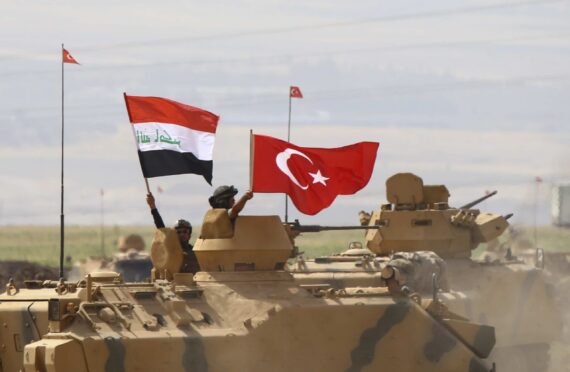 Following the governing AK Party’s statements regarding the controversial referendum in northern Iraq, the two main opposition party leaders, Devlet Bahceli and Kemal Kilicdaroglu have also supported the government in its stance.

Leader of MHP, Bahceli, issued a written statement from the headquarters of the Nationalist Movement Party claiming that “it has become inevitable for Turkey to pursue an effective and comprehensive deterrence policy that includes the use of military force, and it has become inevitable for them to progressively determine coercive measures and gradually implement them.”

“This is a national security issue that cannot be underestimated by Turkey and I want to repeat that the Nationalist Movement party will stand with the government in its measures that it will take with determination in this regard.”

In the statement Bahceli said that the referendum brings a “message of a dark period” in the region, accusing Masoud Barzani of starting an “adventurous journey” that would end up with him “paying a heavy price and disappointment.”

The MHP leader added that “he [Barzani] will see how this childhood dream will turn into a nightmare.”

He called the poll a “piracy referendum” that had no legal and political legitimacy, adding that it is “void and condemned to stay on paper only.”

Earlier this week President Erdogan had only emphasized that the referendum was initiated by the KRG in order to secure the Barzani family’s political inclusion.

Moreover, CHP leader Kemal Kilicdaroglu has urged for a common solution in regards to the aftermath of the referendum.

Talking to reporters in Ankara, the CHP leader called for Turkey, Iran and the central Iraqi government to find a common solution to the problem in northern Iraq following Monday’s controversial referendum.

“If a common solution can be produced, Turkey can make important progress on this issue.”

Kilicdaroglu also added that Turkey had demonstrated a “national stance” on the referendum and even its parliament was supporting this view.

Commercial, economic and political sanctions due

Prior to the referendum, President Erdogan had made it clear that if the Barzani administration do not listen to their calls, Turkey will not refrain from imposing political, economic and commercial sanctions on the KRG administration.

The first warning comes as the Turkish Radio and Television Supreme Council decides to remove 3 northern Iraq TV channels off air – K24, WAAR and Rudaw have been removed from Turkish satellite Turksat.

The decision was taken after the three channels called some parts of southeastern and eastern Turkey as “northern Kurdistan” in their television broadcast.

The channels did not have a license from RTUK, yet they were broadcasting the transmission using the license obtained from the KRG.

In addition to mere channel obstructions, the Turkish and Iraqi military have launched a joint military exercise on the Turkish-Iraqi border.

While Turkey had already started its military maneuvers in the southeastern Silopi region on September 18, a week ahead of the referendum, announcement of a joint exercise came after the vote took place.

A brief statement published on the Turkish General Staff’s official website announced that the third phase of the military exercise will start on Tuesday 3 October, jointly with the Iraqi military at the Habur border gate, also known as the Ibrahim Khalil border crossing, on the Turkish-Iraqi border in the Silopi district of Sirnak.

The area sits to the north of the Syrian and Iraqi borders and contains the Habur border crossing, which is the KRG’s main access point to the rest of the world.