In the “Old Turkey,” to use the term coined by the AK Party, courts often examined the “aptness” of government decisions and acted as if they were opposition parties, banning certain behavior. It has been a long time since this situation was named “judicial tutelage” and many efforts were made to end it. 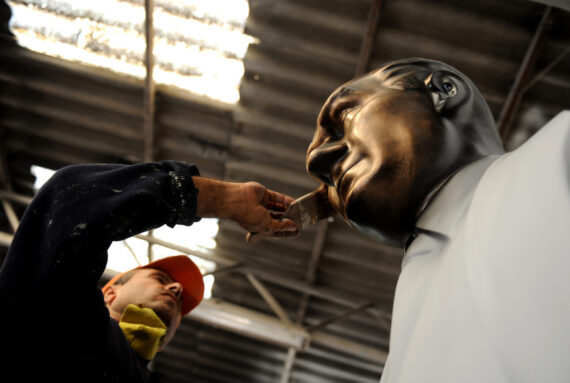 A sculptor works on a statue of Turkey's founder Mustafa Kemal Ataturk on October 19, 2009 in Istanbul. Getty Images

In 2013, the Ministry of National Education abolished the administrative regulation that ordered the recital of the Student Oath, an oath that begins by stating “I am a Turk, honest, and hardworking,” which used to be recited in schools at the beginning of each day. A teacher’s union known for being close to the MHP had opened a case in the Administrative Court regarding this decision made by the ministry. During the time in which the oath had been abolished, Turkey was conducting a series of talks with the outlawed PKK leader Abdullah Ocalan in order to resolve the Kurdish question.

MHP was strongly opposed to this process calling it “Dissolution Process” that was indeed called by the government as “Reconciliation Process.” The Oath was considered racist by non-Turkish groups living in Turkey and MHP saw its abolition as a concession made to the PKK.

The Student Oath Case, which was opened in 2013, was concluded in October 2018 by the 8th chamber of the Council of State. The decision ruled that the Ministry of National Education cannot abolish its own administrative regulations.

This is a problematic decision for a number of reasons. First, the ministry abolishing an administrative regulation does not create a new legal situation, meaning that the Council of State has no ground for a decision concerning it. Second, the Council of State goes beyond matters of law in its decision by stating, “Sufficient scientific ground supporting the Ministry of National Education’s decision to abolish the oath does not exist,” meaning that the court is arguing whether such a decision is right on grounds of pedagogical science rather than legality. However, the Council of State does not have the authority to conduct examinations regarding the aptness of administrative decisions. Its authority is limited to examining and supervising legal matters.

In the “Old Turkey,” to use the term coined by the AK Party, courts often examined the “aptness” of government decisions and acted as if they were opposition parties, banning certain behavior. It has been a long time since this situation was named “judicial tutelage” and many efforts were made to end it.

The government has tried to change judicial cadres in order to end this practice by Kemalist and statist groups. However, these changes led to the rise of FETO in the judicial system, and this terrorist organization tried to establish its own practice of “tutelage.”

Following FETO’s bloody coup attempt on July 15, 2016, extensive crackdowns occurred in the judicial system in order to eliminate FETO members and prevent such attempts of establishing a “tutelage” from occurring again. More than half of the judges and prosecutors working at the time were dismissed. While all this was happening, the greatest supporter of President Erdogan and the AK Party was MHP and its leader Devlet Bahceli.

The Council of State’s decision discussed above thus raises questions as to whether or not those close the MHP among the judiciary came to power after the FETO crackdowns and whether they are prominent enough to show such strength against the government.

The strong open support Bahceli displayed for the Student Oath and his criticisms targeting AK Party’s former Minister of Justice Bekir Bozdag, who comes from an ethnic Kurdish background, makes the MHP’s stance on the subject very clear. MHP wants the oath back in schools.

All these together are issues that made it difficult to continue with the People’s Alliance during the local elections. Unlike MHP leader Bahceli, President Erdogan never brought these issues to the agenda until 23 October. However, the general atmosphere from Erdogan’s surroundings was that MHP’s demands in regards to the pardon of prisoners and the Student Oath was not going to be accepted.

When Devlet Bahceli was at the lectern to speak before his party’s group meeting on October 23, as always, he looked angry and stiff. In this speech, Bahceli announced that the MHP had stopped looking for ways to form an alliance with the AK Party during the local elections. He also used ambiguous language about the future of the People’s Alliance. Due to the questions launched at him after he finished his speech, Bahceli stated that the “People’s Alliance is continuing.” However, it’s not difficult to suggest that the alliance had cracked.

President Erdogan spoke after Bahceli’s speech and his decision to end the alliance possibility during local elections and bluntly stated, “Everyone can go their own ways.” While Erdogan had stated this in regards to the local elections, I think the most important part of his speech was when he defended Bekir Bozdag against Devlet Bahceli and said that “We have no other oath apart from our National Anthem.” Erdogan’s disapproval of this type of Turkish nationalism was also an illustration that the President wanted to highlight the difference between the AK Party and MHP.

Of course, the MHP can choose to abstain from voting. In this case, the budget will pass with AK Party votes. However, the People’s Alliance will maintain to sleep in a coma.

It’s highly likely that we’ll see whether this alliance will continue and what the new rules for the two parties will be after the local elections. After observing their votes, the AK Party and MHP will do a cost-benefit analysis in order to observe how the alliance suits them best.