In addition to President Erdogan and the US President Trump who are both in agreement that the vote should not go ahead, French President Emmanuel Macron also stressed the importance of maintaining Iraq’s territorial integrity. 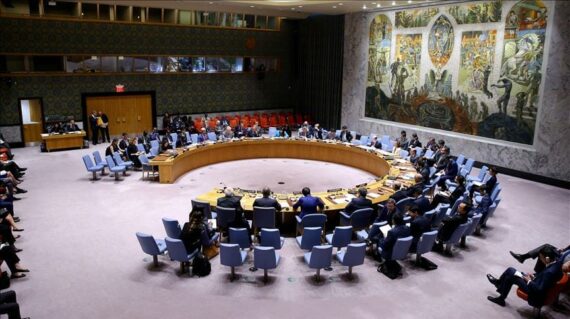 The Kurdistan Regional Government (KRG) has refrained from stepping back from the decision to hold a referendum on independence, where residents in KRG-controlled provinces are scheduled to vote on breaking from Baghdad on 25 September.

The oil rich province of Kirkuk is also among the contested areas where the vote is planned.

In spite of heightening tensions and calls from the US and Turkey to postpone the referendum, calls from Baghdad for further negotiations, the KRG President Masoud Barzani has not announced any cancellation of the referendum.

The statement provided by the Security Council added that the referendum risks detracting from the fight against Daesh, and that it could also disrupt efforts to ensure the safe return of over three million refugees and internally displaced persons to the country.

Council members “expressed their continuing respect for the sovereignty, territorial integrity and unity of Iraq,” urging all issues between the central Baghdad government and the Erbil administration to be resolved “through structured dialogue and compromise supported by the international community.”

International call for referendum to be cancelled

In addition to President Erdogan and the US President Trump who are both in agreement that the vote should not go ahead, French President Emmanuel Macron also stressed the importance of maintaining Iraq’s territorial integrity.

During a phone call made with Barzani, Macron reportedly asked the KRG President to postpone the controversial referendum.

A statement issued by Barzani’s office stated that the two men discussed the “important role” played by the Kurdish Peshmerga forces in the ongoing fight against Daesh in Iraq.

Barzani nevertheless confirmed to Macron that the referendum would be held on schedule, while also stressing Erbil’s readiness to hold dialogue with Baghdad after the poll.

Turkey to debate military operation in Iraq and Syria

The ongoing developments in Iraq and Syria remain high on the political agenda.

In this regard, according to the Justice and Development (AK) Party’s parliamentary group deputy chairman, the parliament will hold an extraordinary session on Saturday to debate the extension of Turkish military operations in northern Iraq and Syria.

Mustafa Elitas stated that “the general assembly of the Turkish Parliament will hold an extraordinary session on Sept. 23 at 16.00 [4 p.m. local time] to debate the extension of the Prime Ministry’s motion that enables the government to conduct cross-border operations in northern Iraq and Syria.”

The motion had previously allowed the Turkish military to carry out cross-border operations from Oct. 2, 2016 until Oct. 31, 2017.