“No country has a perfect human rights record ... No country, no matter how powerful, should be excluded from council discussions." 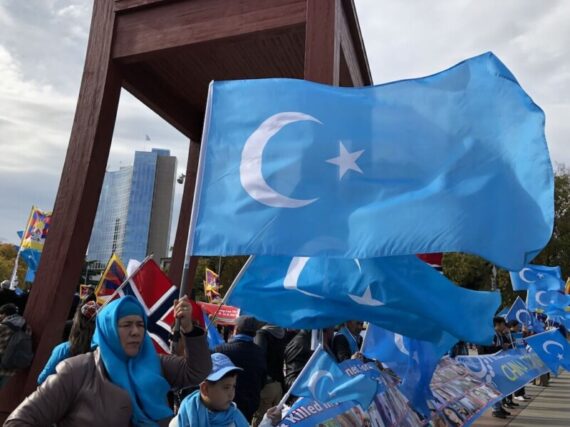 Uyghurs and Tibetan people demonstrate against China outside of the United Nations (UN) offices during the Universal Periodic Review of China by the UN Human Rights Council in Geneva, Switzerland. Photo by Anadolu Images

In a narrow diplomatic victory for China, the U.N.’s highest human rights body voted on October 6 against a proposal from Britain, Turkey, the United States, and other predominantly Western nations to hold a debate on alleged human rights abuses against Muslim Uyghurs and other ethnic minorities in China’s western Xinjiang province.

The loss – 19 against, 17 for, 11 abstentions – is just the second time in the council’s 16-year history that a proposal has been rejected, and analysts see it as a setback for accountability efforts, the West’s moral authority on human rights, and the United Nations’ reputation.

The vote was a test of political and diplomatic influence between the West and Beijing, and it would have been the first time that China’s human rights record merited a distinct agenda item at the council.

“This is a disaster. This is really disappointing,” said Dolkun Isa, President of the World Uyghur Congress, whose mother died in a camp and whose two brothers are missing. “We will never give up, but we are really disappointed by the reaction of Muslim countries,” he added.

In a statement, more than 60 Uyghur rights organizations from across the globe urged the United Nations and its human rights experts to “take concrete action according to their mandates.”

An Advocate for ISHR in China and Latin America, Raphael Viana David, said, “While, in recent years, the Council has been able to scrutinize international crimes in Palestine, Ukraine or Myanmar, and to investigate systemic racism and police violence in the United States, Council members sent today a dreadful message: China remains so far untouchable”.

Read: Xinjiang: The New Face of the Old Problem in China

On Twitter, Phil Lynch, head of the International Service for Human Rights, described the voting record as “shameful” and further addressed Muslim nations in the statement, “OIC states fail to stand with Uyghur Muslims. Somalia the only African state to actually stand against systemic discrimination. Ukraine’s abstention betrays values of solidarity and accountability to which it appeals”. Somalia was the only Muslim nation in favor for the debate, despite the country’s close diplomatic ties with China.

In a meeting on August 18th at the Forum on China-Africa Cooperation, Foreign Minister Wang Yi announced China’s pledge of debt forgiveness for 17 African countries in an effort to establish connections and shift western influence away from the continent.

There is a likelihood that investments with China are the reason why numerous Muslim countries, abstained or voted against the resolution due to ‘seeking closer ties.’

Before the voting, the Chinese ambassador Chen Xu stated Beijing’s “China firmly opposes and categorically rejects the draft decision”. He also stated that “The U.S. and some other countries, in disregard of their own serious human rights violations, are indulged in pointing fingers at others”. He reiterated that the “international community must not allow any attempt to politicize or instrumentalize human rights issues” as it sets a dangerous precedent.

China’s Foreign Ministry issued a lengthy statement after the vote, claiming that “For some time now, the U.S. and some other Western countries have been misinforming the public about Xinjiang and seeking political manipulation in the name of human rights simply to smear China’s image and contain China’s development”.

He reaffirmed that “The issues that the Human Rights Council truly needs to focus on are the serious human rights violations concerning the U.S., the UK and some Western forces, including systemic racism and racial discrimination, the rights of refugees and migrants, rampant gun violence, unilateral coercive measures, and massive killings of innocent civilians in overseas military operations”.

The U.S. ambassador, Michele Taylor, said that the purpose of the proposal for the debate was to “provide a neutral forum for discussion” that would allow China to voice its opinions and hear the opinions of others.

“No country represented here today has a perfect human rights record,” she said. “No country, no matter how powerful, should be excluded from council discussions. This includes my country — the United States — and it includes the People’s Republic of China.”