If anti-imperialism means standing with the colonized, the fight should go beyond China. 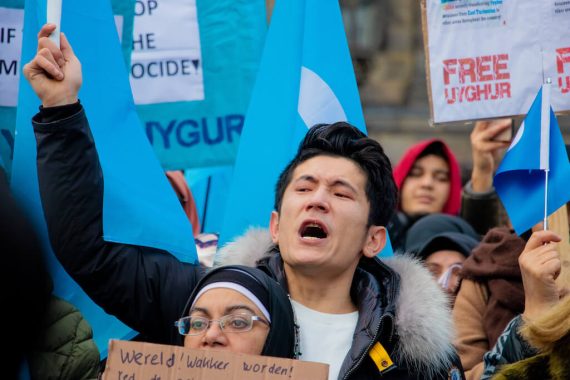 People take part in a demonstration against China’s persecution of Uighurs in Xinjiang, at Dam Square in Amsterdam, Netherlands on December 29, 2019. Photo by Abdullah Aşıran, Anadolu Images

No one can say the world is ignoring Xinjiang.

Testimonies of the Turkic Uyghurs who managed to escape the province have reverberated, provoking reactions ranging from disbelief to outrage.

The danger, however, is that we might narrow down the issue to a narrative of authoritarian China abusing the rights of minorities and therefore needing to be confronted.

We should not forget that this particular repression of Muslims in Xinjiang harnesses all the tools of the globalized modern age: capitalism and progress which often mean the policing, exploitation, and dehumanization of the recipients of the so-called help.

For this purpose, it is important to position Chinese state violence at the crossroads of the post-socialist neoliberal development and the surge in Islamophobia since the West’s “war on terror” was launched. Is this not a part of the centuries-long global imperial history?

Although the People’s Republic of China was born from the resistance to imperialism, it has reproduced the tenets of imperialism to create the infrastructure for political violence.

Following the footsteps of European colonialists, the communist state-builders also look down on indigenous people in their frontier territories, treating them as incapable of self-rule, and, at the same time, extracting their resources.

Is there anything new in China’s behavior?

Some would argue that for the first time in history mass surveillance is being used on such a scale, and that this could give China an award for inventions on suppressing its own people.

Because authorities labeled Uyghurs as threatening the order, a long list of beneficiaries in the guise of technology companies are allowed to pitch their solutions, advance the dehumanizing project, and thrive.

In Xinjiang, most non-Han people live outside of the detention facilities, but their lives resemble one huge open-air prison

Anything more seductive than making money from mass surveillance and incarceration? The capitalist accumulation process never stops – it continues to be reinvented! That is why the pre-criminal offences of thought and action were added to the long list of “extremist but not serious terrorist crimes.”

This accompanied by capital-driven development dispossessed Uyghurs, producing a neo-colonial system at a frontier of global capitalism.

In Xinjiang, most non-Han people live outside of the detention facilities, but their lives resemble one huge open-air prison. With their movements being tracked, passports taken away, and phones monitored all the time, Uyghur people are far from free – even in comparison to other places in China.

Terrorism label as an act of majoritarian state violence

Without doubt, profiling all Uyghurs as potential “terrorists” constitutes an act of majoritarian state violence, known in many other corners of the world.

For Chinese officials, foreign influence and Islamic extremism have become catchy slogans under which Beijing must redesign Uyghur Islam and the whole province, and make them more aligned with the demands of contemporary China.

Some even raise the alarm that the solutions enhanced in Xinjiang might be later exported to other countries to establish a very similar order of things. Authoritarians stand together, either way!

Indeed, algorithmic rule managed by a small elite entails a dramatic concentration of power in the hands of a few, making this experiment too tempting for other regimes not to take notice.

The Chinese visionaries of state violence in the right context

The Soviet model reeducated citizens through forced labor and collective training. On the other hand, Western imperial powers targeted certain ethnic groups who had independence aspirations by deploying some sort of eugenics.

It seems that China borrows from both streams of imperialism which combine the use of propaganda and justify mass detentions of a segment of the population. Therefore, it becomes inevitable that special measures against the target group will be accepted by the rest of Chinese society, which view them as the necessary steps to provide safety, and not aimed at an erasure of identity. All the while the government abuses segments of the population to display its ability to protect the others.

This landscape of terror could have looked different if things in the West had played out differently.

It is the West’s response to 9/11 that allowed China to embrace anti-Muslim rhetoric. Places such as Guantanamo Bay continue to inspire others to justify torture and preemptive punishments. Now, the U.S. and European institutions face accusations of hypocrisy when denouncing China’s policies.

In these moments, many ask about the rationale behind Trump’s ban on Muslims, the criminalization of asylum-seekers, or the efforts to influence the country’s minority demographics.

Is the Chinese government working alone to achieve similar goals?

Looking back, forced labor has prevailed in China for centuries, with the Chinese Civil War itself constituting a show-off of nationalists and communists making use of reeducation for the broad population.

Then, after the communists won the war, millions were pushed into a penitentiary state mechanism – this later evolved along with Chinese society and brutal labor camps persisted in a wide range of settings.

One of the Chinese’s colonial endeavors was transforming the region for their own purposes, exploiting its natural resources, and dispossessing its people.

Uyghurs are stripped of the most lucrative job opportunities, and are kept under the strict eye of the watchtower in which a relationship of superiority and inferiority is duplicated.

China’s colonial project includes the subjugation of the indigenous population and social engineering. Han people, who have settled or been settled by a decree, in Xinjiang, disrupt the social structure of the region. As a result, the proportion of Han Chinese has risen from 6% to roughly more than 40%, forming a counterweight to Muslim Uyghurs.

Should we place all the guilt on the leadership of China?

Xinjiang has been rebooted to deploy tactics that are already on the rise around the globe, particularly in the borderlands, where the colonial settings have been replaced.

Reinforcing these mechanisms once again normalizes the century-long process of the spread of concentration camps.

The struggle against the terror campaign in Xinjiang should be considered alongside labor camps and mass incarceration in other parts of the world. If anti-imperialism means standing with the colonized, the fight should go beyond China and be linked to other places where it is globally connected. 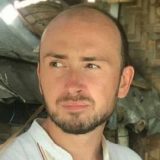