A statement released by his spokesman Stephane Dujarric, highlighted that Guterres “respects the sovereignty, territorial integrity and unity of Iraq” and recommends that all outstanding issues “be resolved through structured dialogue and constructive compromise.” 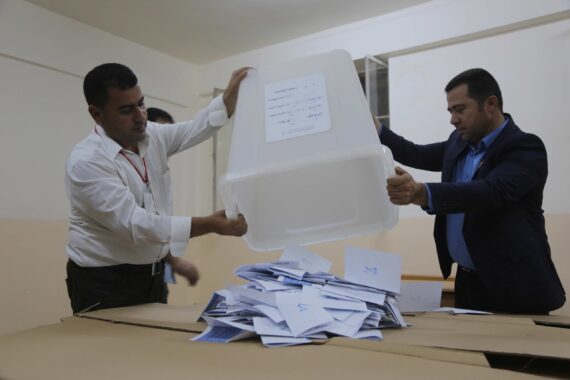 Officials count ballots at a polling stations after the controversial referendum for an independent state of Iraqi Kurdish Regional Government (IKRG) on September 25, 2017. Anadolu Agency

Voting ended on Monday evening for the controversial referendum on the secession of northern Iraq’s Kurdish region.

The polls were due to close at 6 p.m. local time (3 GMT), but the Kurdish Regional Government’s Election Commission extended the operation by another hour in order to allow voters to cast their votes, with the exception of the Kirkuk province.

According to reports of the Anadolu Agency, the Election Commission also reported that the turnout stood at 76 percent.

While local authorities have urged the residents not to carry out aerial firing while celebrating the results, a shooting incident was reported in which a civilian was killed in the disputed district center of Tuz Khurmatu, Saladin province.

In wary of potential violence that may erupt due to the referendum, Turkish Foreign Minister Mevlut Cavusoglu warned the KRG that the Turkish army will intervene if the Turkmen population are targeted.

As the count begins, many statements have emerged from countries condemning the KRG and underlining that the results will not be recognized.

The UN Secretary-General Antonio Guterres said Monday that he was concerned about the “potentially destabilizing effects” of the referendum held by the KRG in defiance of the international community.

A statement released by his spokesman Stephane Dujarric, highlighted that Guterres “respects the sovereignty, territorial integrity and unity of Iraq” and recommends that all outstanding issues “be resolved through structured dialogue and constructive compromise.”

The statement further added that the UN Secretary-General expects UN-mandated activities to be allowed to continue, unhindered.