War Bells Ring in Ethiopia: Who Is Fighting Whom?

Ethiopia is becoming a battleground for several groups, all contributing to the country’s risk of civil war and collapse. 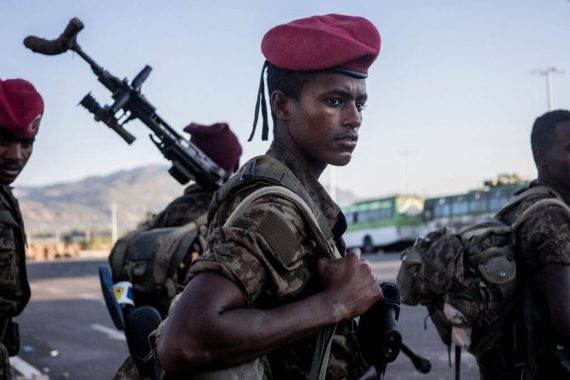 A soldier from the Ethiopian National Defence Force (ENDF) looks on in Kombolcha , Ethiopia, on December 11, 2021. Photo by Amanuel Sileshi, AFP via Getty Images

Following months of political strife, Ethiopia’s Prime Minister Abiy Ahmed marched to the front in the first week of December 2021, deployed defensive forces, and declared victory, stating that the government had recaptured the key Amhara and Afar Regions previously seized by the Tigray People’s Liberation Front (TPLF). However, the proclaimed triumph was nothing more than a political gambit and a premeditated pullback to facilitate future steps, according to the TPLF.

Although the violent conflict began in November 2020, it took a dramatic turn about a month ago when the TPLF, which is strategically allied to the Oromo Liberation Army, claimed to have seized control of the critical towns of Kombolcha and Dessie, both located on a strategic highway leading to Addis Ababa. Despite Abiy’s claims that he had recaptured these areas, the TPLF’s subsequent replies pose troubling doubts about the country’s social, political, and economic future.

The aftermath of the Tigray war appears not to be limited to a humanitarian crisis that has resulted in millions massacred, starved, and forced to flee their homes, as other consequences such as increased political polarization, economic crisis, and diplomatic challenges are slowly unfolding in the country.

Among the far-reaching consequences are the absence of aid, the war spreading to other towns in the country, war-induced economic disintegration, and an exponential drop in the country’s GDP. Additionally, the decision to close at least 30 embassies due to alleged financial losses, as well as the destruction of the Amhara and Tigray Regions, which would take at least 30 years to recover, highlight the country’s gradual collapse as a result of the conflict.

Now more than ever, Ethiopia appears to be at a significant ideological and political crossroads. When we hold up to view the root causes of many internal Ethiopian disputes before and after the country became a federalist state in 1995, we see diversity, ethnic nationalism, and divergent political visions. Tigray is no exception. The TPLF ruled the country for three decades before Abiy’s election in 2018.

Their rule maintained a quasi-federalist leadership style that partially succeeded in bringing people together under the banner of ethnic federalism yet failed to implement the actual tenets of ethnic federalism, resulting in grievances and high tensions between the government and the people, and ultimately leading to the party’s demise.

However, tensions did not dissipate when Abiy Ahmed came to power, owing to the conflicting visions of the preceding actors who once held political leverage. The TPLF favored a more absolutist approach to diversity, with Amhara being more assimilationist and Oromo more secessionist. On the other hand, Abiy attempted to put the country through a significant transition to centralization by introducing the idea of the Prosperity Party, a new pan-Ethiopian party established to supersede the Ethiopian People’s Revolutionary Democratic Front (EPRDF) coalition.

The TPLF claims that this is a plan to subvert ethnic autonomy and consolidate federal government control. In addition, the TPLF lambasted the voting attempt of three of the four ethnic-based parties that comprise the countries’ ruling EPRDF to merge into Abiy‘s single national party. These three parties are the Omoro Democratic Party (ODP), the Amhara Democratic Party (ADP), and the Southern Ethiopian People‘s Democratic Movement (SEPDM).

Ethiopia is becoming a battleground for several groups, all contributing to the country’s risk of civil war and collapse.

Today, the country is becoming a battleground for several groups with either centripetal or centrifugal visions, all of which are actively contributing to the country’s risk of civil war and state collapse. The strategic alliance between the TPLF and the Oromo Liberation Army (OLA), a separatist group that broke away from the Oromo Liberation Front (OLF) to challenge Abiy’s legitimacy and Amhara’s government, serving as the backbone for Ethiopian federal forces, speaks volumes about the ideological split entrenched in the political and social system.

A new trend – guns for legitimacy?

The dispute between the federal government and the Tigray Defense Forces (TDF) has moved beyond Tigray, rekindling longstanding enmities between Tigray and Amhara, and gathering armed groups from different areas such as Oromia, Afar, and Benishangul, intensifying identity-based clashes and tensions throughout the country.

Following the outbreak of the war, the habit of resolving issues through talks in parliament or systematic governmental procedures has now shifted to using arms and weapons to achieve goals or attain desired outcomes, thus defying the sanctity of state authority and federal legitimacy. One example that explicitly demonstrates that anyone with access to firearms can act without regard for the law lies in the Amhara nationalists’ forceful annexation of Welkayit and Tegede/Tsegede, allegedly seized from them by Tigray in 1991.

Unfortunately, with Abiy Ahmed’s declared victory against the TPLF, the route to dialogue and negotiation is deteriorating.

Furthermore, the TPLF’s decision to disregard regional sovereignty and send soldiers into the neighboring Amhara and Afar Regions indicates that guns- and armament-generated legitimacy is the current trend. Even the government has taken the unprecedented step of requiring regular citizens to take up arms to combat the TPLF, going so far as to allow them to seize firearms from them. Arms proliferation has also been seen among minority ethnic groups. These groups have shown a lack of faith in the political regime, leading them to view taking up arms as the ultimate silver bullet to their concerns.

The chance of averting the months-long conflict and maintaining peace in the nation mainly depends on the ability of the parties involved in the atrocities to negotiate and find common ground. However, this seems highly improbable due to the unforeseen moves and gambits by the parties involved in the conflict. Unfortunately, with Abiy’s declared victory against the TPLF, viewed by the TPLF as yet another tactical step towards a better strategy, the route to dialogue and negotiation appears to be quickly deteriorating.

If the conflict continues in this direction, the resulting humanitarian crisis and human toll will leave the country in a terrible state, with little hope of medium- or long-term progress or recovery. Moreover, with more ethnic-based organizations joining the Ethiopian army or the TPLF, the probability of severe consequences resulting from the war appears imminent.

These consequences can only be avoided if these groups strive to integrate diverse ideological positions and establish a vision for cooperative administration or negotiate on the provided terms.

Even if the TPLF and Abiy decide to terminate the war, ethnic nationalism and other competing ethnic interests will continue to give rise to tensions. However, if the conflict is brought to an end, aid may reach the Tigray Region, partially helping alleviate the critical conditions of those suffering the consequences of the war. Nonetheless, the damage done is indelible and is predicted to have a long-term impact on the country’s economic and sociopolitical fabric.