We need people’s movements such as BLM to march and demonstrate on the stolen ground never ceded that First Nations Sovereignty and Black Lives Matter. 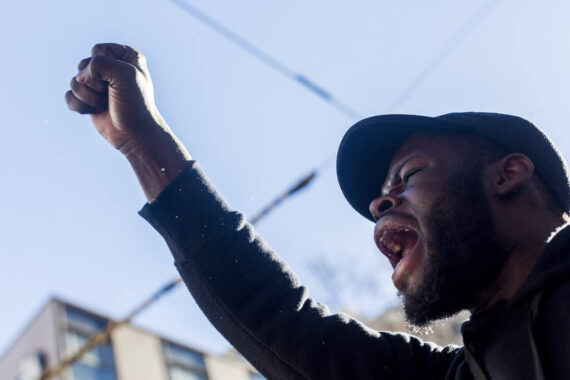 I watch people march under Black Lives Matter (BLM) around the globe. Trepidation arises in my stomach from my concern for the people’s safety from COVID-19 and associated police powers, each equally unwanted during a protest. An ironic smile slightly touches my lips, about extended police powers under the guise of ‘health’ cast against those who advocate an end to racialized policing.

The ‘ping’ sound of a new email draws my attention. I see it is from my cousin, titled ‘old family photos.’ My cousin saved the electronic file as: ‘Heithersay Prospecting, 1893, Coolgardie’. Curious, I open the photo that takes me to a significant moment. My white great grandfather; Afghan cameleers, and Aboriginal trackers, each embody an impressive end-of-nineteenth-century poise.

It strikes me that this is one of those uncanny timeless moments etched in history that play out before my very eyes in the present.  A moment where personal family stories – represented in the photograph I open – are writ large across national and global political landscapes.

I contemplate the way my personal family history entangles with race relations enacted past and present. The family photo encapsulates the essence of why the BLM movement came to be and its current relevance both globally, to Australia, and for me, a white Australian citizen. I think about the centuries of persecution against Black people and how the privileges attributed to white people are yet to reconcile in many countries, including Australia.

Read: How the Politics of Antiracism Impact Art, Culture, and Literature

A matrix of time and place yawns wide before my very eyes.

In this suspended matrix moment, photographs of the activists who campaigned against the nine-minute choke-hold of George Floyd, an unarmed African American man who called out ‘I cannot breathe’ until he asphyxiated, murdered by Derek Chauvin police officer flood traditional and social media celebrating the first guilty verdict of a police officer. In Australia, 475 First Nations peoples have died in custody since a Royal Commission to Aboriginal Deaths in Custody 30 years ago. The Government continues to ignore the recommendations.

The pictures my cousin has sent me vexed me in a way I’ve never experienced. I feel gut-wrenching sadness and compassion for what I see. Who are these people? Whose country are they on? I start to notice the details before my eyes and feel my breathing return with the usual passing of time. The caption says ‘The Annisfield Prospecting CPY LTD’ to the left and toward the right-hand bottom is ‘Coolgardie.’ On the back of the photo is ‘1893’.  My cousin notes that one of the images is on an expedition party led by the Heithersays. John Heithersay is my great grandfather.

The image taken in Coolgardie has the soft browns of its time, 1893. The quality of this old photograph that had lasted 200 years with little fading, although there is some damage from wear and tear, draws me. The image is still clear enough to view the people, to see the red shades of fine powder-granulated dirt upon which people and animals stand and sit. Hand-sized rocks are scattered here and there to the horizon.

Read: “The US Needs a Reckoning, Not a Reconciliation”: An Interview with Sundiata Cha-Jua

Two large white-trunked trees stretch a few ghostly gangly arms up and across beyond the frame. Smaller saplings as far as the eye can see emerge from the land as if a hand has cast their seeds and is gently caring for them under the expansive, bright sky. In the timeless pause, I feel the dirt granules underfoot, smell the trees’ slightly sharp eucalypt scent, and hear the soft whispering of the leaves.

The scene reminds me of Gammage’s book The Biggest Estate on Earth: How Aborigines Made Australia how the oldest continuing culture developed carefully pan-continental environmental and agricultural management that sustained all natural resources. Brown marks from sticky tape smudge the sky of the photo. This picture represents an era that catastrophically disrupted this ancient care of the country.

Four First Nations men sit cross-legged at the feet of their master, my great grandfather John Heithersay. My breath stifles. I look in turn at each man. The thought arises: here it is. I wondered if my family was ever directly involved like this. Simultaneously I am aware of curiosity: who are you? From where do you come? … My grandfather had slaves! Were your family harmed or killed? What happened to your country?

I look at my great grandfather with misgiving. What have you done?

I look closely at each person’s clothing in the photo as if doing a virtual pat-down security check for weapons. I expel a deep sigh of relief; there are none. No tell-tale bulge in clothing. Nor is there a ‘saddle gun’ visible on the camels. If they were the hunter/killer type, wouldn’t they proudly brandish their weapons? I look again at the cameleers. Is this a package deal of camels, cameleers, and Indigenous trackers to service what became the Kalgoorlie gold-vein craze?

I remember going to school with Afganni Descendents in N.T. Their families had been Australian for many generations like mine. Perhaps the Aboriginal men astutely evaded death through their arrangement with the cameleers. Maybe they are family through marriage. After all, the camels, cameleers, and Aboriginal trackers must have worked together before my great grandfather procured their service.

Online I find the Wangka Goldfields Aboriginal Language Centre Aboriginal Corporation (GALCAC) based in Kalgoorlie, Western Australia (WA). Sue Hanson, a Senior Linguist, promptly emails me back. The photo is of immense importance to the Centre. Sue tells me that three main activities decimated the Coolgardie region’s Indigenous people: the mining industry, the railway installation between Perth and Kalgoorlie, and the pipeline from Mundaring to Kalgoorlie.

Sue writes that by 1910 only twenty to thirty people had survived. The descendants of those survivors are currently trying to prove their relationship to the land through Native Title. She is sure the descendants will be delighted to see this photo as they have no images that date back to the 1890s.

I wish I could send The Uluru Statement from the Heart, written by First Nations to the Australian Government and people, through the matrix of time to my great grandfather. I think about how the story of my great grandfather, the Afghan cameleers, and the four Indigenous men on Wangka Country is just one of the thousands of moments. It could have been different in 1893 if there had been Voice and Treaty with First Nations People. Instead, that era brought genocide.

We need people’s movements such as BLM to march and demonstrate on the stolen ground never ceded that First Nations Sovereignty and Black Lives Matter. Daily, during a global Climate Crisis, governments and big business destroy sacred sites for fossil fuels and roads, right across Australia such as the Stingray Sisters in Maningrida, N.T., Wangan and Jagalingou in Queensland by Adani, Jukkan Gorge Caves, in Western Australia by Rio Tinto, and the Djab Wurrung trees by Victoria State Government because we don’t have a document such as the Uluru Statement from the Heart as our nation’s spiritual constitution. This document is our shared cultural and spiritual understanding for the benefit of all Australians.

Dr. Catherine Koerner is a published author with book and articles in critical race and whiteness studies on white people's lack of historical knowledge and white Australian Identities. She has worked at Flinders University of South Australia, Batchelor Institute of Indigenous Tertiary Education (N.T.), was a Research Fellow with Charles Darwin University (N.T.) and now is Lecturer, Community and Human Services, Federation University of Australia, Berwick, Victoria. She has also lived in Indonesia, Nepal and India where she trained in Buddhist meditation and worked with minority religious groups. She has also worked in community organizations in youth homelessness and to end sexual violence against women and children.