What Does Sectarianism Mean for Lebanese Society?

Can a fully civilian government be established in Lebanon? Can the parliament be replaced by politicians with no sectarian affiliation at all? Can the term "sect" be completely removed from the Lebanese identity one day? 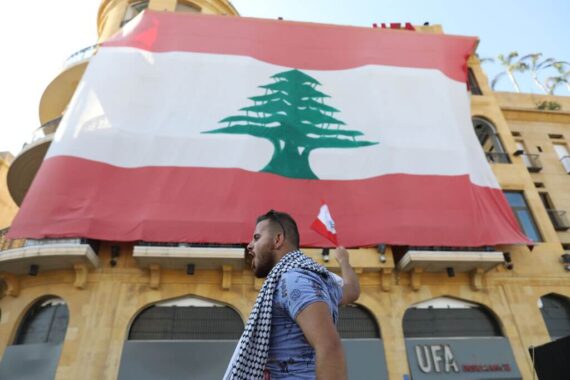 A man walks past a building covered with a giant Lebanese flag on the one-year anniversary of anti-government protests on October 17, 2020 in Beirut, Lebanon. Photo by Marwan Tahtah, Getty Images

When independent Lebanon was established in 1943, the political structure was designed to determine the proportion of representatives in the parliament according to the density of the country’s sects. At first glance, this design, based on confessionalism, the successor of the “Mutasarrifate System” formed in 1861, was seen as the only way to ensure social justice for Lebanon.

However, in line with this understanding, political road maps drawn by sectarian concerns in Lebanon led to divisions not only amongst the political elite but also the Lebanese people who were parts of the sectarian system. While the civil war between 1975 and 1990 demonstrated the violent form of this separation, most of the actors of the civil war took part in post-war Lebanese politics and played important roles in deepening the social crisis after the war.

On October 17, 2019, the Lebanese people took to the streets with the slogan “all means all” (kullun ya’ni kullun) in order to remove the perpetrators of this crisis, and to create a new political and legal system. In the early days of the demonstrations, when no sectarian slogans were chanted and party flags were not allowed, the only thing the demonstrators wanted was the complete destruction of the sectarian political system.

So, for the Lebanese, the purpose was to rid themselves of this sect-based political system and the patterns of hegemony it had created in 150 years.

Read: The Beirut Port Explosion Is the Chernobyl of the Lebanese Sectarian System

However, the existing social rifts became visible during the demonstrations and manifested themselves with the main protest locations shifting to smaller ones and different social groups raising their individual demands. Calls for a “civil state” addressing leaders of the sectarian system were ironically replaced by the retired soldiers’ reaction to salary cuts or by students’ slogans to improve the education system.

In addition to these, with the failure of Hassan Diab’s government, which was established in January 2020, the sense of unity in Lebanese society eventually disappeared.

Following the protests in Lebanon, questions began to arise such as how many of the problems resulted from the sectarian political system, and whether the problem is the system itself or the politicians who cannot run it.

It now became necessary to question the sectarian codes ingrained in Lebanese society.

It was clear that the political elite sought to dissolve any formation which defied the sectarian understanding centered on their own interest.

At the same time, it became necessary to question the sectarian codes ingrained in Lebanese society in order to understand how the country’s social segments handle the current problems.

The Shiite political factor in Lebanon

Shiites were the first to break from the October protests. Hezbollah leader Hassan Nasrallah’s statement had a significant impact on the Shiite community who said that the demonstrations went beyond their original intent. Many Shiite groups followed Nasrallah’s call to “leave the streets” signaling the first split in Lebanon’s protests. The instance revealed the endless trust of the Shiites in the party’s leadership; the Shiites appear to interpret sectarian identity as absolute obedience to Nasrallah’s political orders.

Considering the fact that Hezbollah is not only a military power but also a social one, thanks to its non-profit organizations, it becomes clear how political parties fill gaps created by the Mutessarifat lack of state and how these parties exercise their influences on people. Following the resignation of Saad Hariri on October 29, 2019, Hezbollah’s promise to pay salaries even if the government had fallen explains the reasons why sectarianism maintains its hold over the Lebanese identity.

Lebanese people gather at the Martyrs' Square during a rally to protest the ongoing garbage crisis and alleged government corruption on August 29, 2015 in Beirut, Lebanon. Photo by Bilal Jawich, Anadolu Images

It is true that there is a strong threat perception by members of all sects who are afraid of being taken over by another sect. However, the walls of the Lebanese sectarian system are not that sturdy. The slogans chanted by some Shiite groups against their own sectarian courts before the October protests is a good example of this fragility.

Shiite mothers took to the streets to draw attention to how they were victimized by the rights of custody accorded to them by the Jafari court in January and February 2020.

Although they did not unite with other sects, Shiites too turned to the streets to solve their internal problems during the main protests. Shiite mothers took to the streets to draw attention to how they were victimized by the rights of custody accorded to them by the Jafari court in January and February 2020. However, they did not want to remove the courts completely, but to reform them. For them, the institutions for the preservation of Shiite identity should remain in place – these were only defects that needed to be corrected.

This is, of course, not unique to Shiites in Lebanon. After the massive seaport explosion in Beirut in August 2020, the images of support by each ethnic and sectarian group given to their community make it clear why the Lebanese return to their sectarian quarters. According to Armenian Weekly, most of the medical needs and construction materials sent from Armenia to Beirut would be transported to the city’s Armenian neighborhoods most heavily affected by the explosion.

Armenia, of course, was ready to provide tailored assistance to the country’s substantial and influential Armenian community. Similarly, footage shows the Maronite Church distributing social aid to their coreligionists. People have little choice but to take refuge in their sects.

For the majority of Sunnis, Lebanese sectarianism is more of an actor-oriented problem. If the system is not going to change, the actors should not change either. Therefore, the country’s prime minister Saad Hariri should have remained in his position since he could protect the Sunnis better than Diyab thanks to the support of the Gulf States. That was what actually happened, and Hariri took over again a year later proving that he was the leader of the Sunni community.

There are also some groups who define sectarianism on the basis of socioeconomic and cultural traditions. One of them is the Druze community, who have been zuama-landlords in Mount Lebanon for many years. Centuries ago, the structure formed by the Druze, who were among Lebanon’s influential landlords and held political power in their hands, was not focused on sectarianism.

Even though their population was limited, they managed to maintain their sectarian principles thanks to the zuama system. Today, this system is weaker in Lebanon than in the past, but it continues to maintain its strength for the Druze. The Druze political leaders Velid Canbolat and Talal Arslan maintain this system in order to protect their sectarian identity. For the Druze, sectarianism finds its way via the zuama system.

No doubt, the political order in Lebanon does not satisfy any social need today. Politicians, who believe that they can open any door with the sectarian key, do not hesitate to shut these doors in people’s faces when the circumstances allow for it. Deepening cracks cause the society-state relationship to deteriorate.

The Lebanese are still looking for answers to vital questions such as: Can a fully civilian government be established? Can the parliament be replaced by politicians with no sectarian affiliation at all? Can the term “sect” be completely removed from the Lebanese identity one day?

However, there are other questions as well, ones that the Lebanese are afraid to ask: What if the social classes that feed the sectarian elites who desire the continuation of the current instability come out stronger than predicted in the end? Or, what if “all means all” is a slogan that conceals “except sectarianism” in it?

Tuba Yıldız is Assistant Professor at the Faculty of Theology, Istanbul University. Her studies concentrate on sectarian policies in the Arab regions of the Ottoman Empire and the relationship between religion and politics. Her areas of research also cover contemporary politics in Lebanon, more specifically sectarianism in Lebanon's recent political history.

Also Read
Could Blockchain Be a Real Game Changer?