What does Turkey’s Map of Political Alliances Look Like for the Upcoming Local Elections?

What makes the upcoming local elections more important than a simple vote to determine local administrators is the fact that the opposition is trying to make it ‘a referendum vote’ for the Turkish government. And this effort may lead to the most critical stage of a struggle in voter sociology, which has been long ongoing. 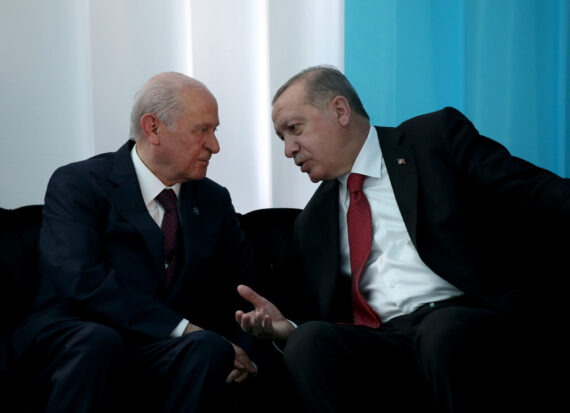 Turkish President Recep Tayyip Erdogan (R) and Turkish Nationalist Movement Party's (MHP) Leader Devlet Bahceli (L) chat each other as they attend a rally in solidarity with Palestinians after Israeli aggression against civilians on Gaza border, on May 18, 2018 at Yenikapi fairgrounds in Istanbul, Turkey. Anadolu Agency

Since 2013, Turkey has been experiencing deeply traumatic events one after the other. The country has chosen to deal with these events with a new constitution and elections, preferring something new rather than old in order to address the trauma. We are now in the final stretch of a marathon of elections that have been going on for the last two years.

After the local elections in March 2019, we will enter a 3-year period without elections, which will last until 2022. Considering the fact that we’ve continuously been under an atmosphere of elections since March 2014, which have been pretty fierce, this 3-year period will certainly feel different for the country.

Since the previous local elections held in March 2014, the nature of politics, political sociology, and voting behavior in Turkey have changed significantly.

What makes the upcoming local elections more important than a simple vote to determine local administrators is the fact that the opposition is trying to make it ‘a referendum vote’ for the Turkish government. And this effort may lead to the most critical stage of a struggle in voter sociology, which has been long ongoing.

I will attempt to explain the reasons for this.

Now that Turkey has fully transitioned to the presidential system, the government is stable and President Recep Tayyip Erdogan will rule the country until June 2022. However, the situation is not the same in Parliament. Erdogan’s Justice and Development Party (AK Party) does not hold the majority. Thus, the AK Party needs to maintain good relations with the Nationalist Movement Party (MHP) – its electoral ally during the 2018 elections. (The opposite also holds here, meaning that the MHP needs the AK Party as well).

The continuation of the alliance that was established prior to the parliamentary and presidential elections in 2018 had become a political necessity. Leader of the MHP, Devlet Bahceli, was the first to state this, arguing that for a presidential system to be truly established, the success of the People’s Alliance must continue in the local elections, since the opposition would rekindle discussions regarding the presidential system in case of a decrease in votes.

Bahceli was not wrong with this opinion. Similar to the efforts between the AK Party and MHP, the Nation Alliance, which was first established for the 2018 elections, between the Republican People’s Party (CHP), Iyi Party and Felicity Party also seems interested in employing a strategy of cooperation and alliance for the local elections.

While the Felicity Party does not yet appear to be a part of this equation, CHP and Iyi Party have begun flirting with the idea of an alliance. In my opinion, Bahceli’s analysis still carries its validity. However, the dynamics have significantly changed when the AK Party and MHP publicly declared following the Student Oath debate that they will not form an alliance in the local elections.

Political scene after the parliamentary elections in July 2015

To recall the last parliamentary elections, Turkish voters were roughly divided into two major blocs. The first and majority bloc represented by the People’s Alliance consists of 54% of the voter base. The Nation Alliance received 34% of the vote. The Peoples’ Democratic Party (HDP), which entered the elections outside of any alliance, fortified its position in the Turkish political landscape with 12% of the vote.

When examining these results, we see that the percentage of votes received by the AK Party has decreased to the levels obtained during the 2015 July elections. This is when the party failed to receive a majority in Parliament for the first time (since coming to power in 2002). The only consolation for this was that President Erdogan was selected as the first president of the presidential system in the first round, with 52.6% of the vote. The AK Party now cooperates with the MHP in order to achieve a majority in the parliament, meaning this is a de facto legislative coalition.

In comparison to the number of votes it received, this situation gives the MHP disproportionate influence. This is how, despite being the fourth largest party in Parliament, with only 50 members, the MHP could suggest for a general pardon for prisoners convicted of certain crimes.

MHP is evidently trying to use this position as a “leverage.” The last of such cases is the recent Student Oath debate, which has been the last the straw that broke the camel’s back causing the two parties to break up and follow their own ways during the local elections of 2019.

Likewise, the slowdown of the Turkish economy, along with the rising levels of inflation and unemployment, seems to have increased public discontent regarding the AK Party prior to the election. The general election held in June 2018 has shown that while the MHP lost a significant amount of votes to the newly formed nationalist Iyi Party, it has retained its significance by drawing a similar amount of votes from the AK Party. MHP now intends to recapture the nationalist vote it lost by employing its public perception.

Some recent polls reveal a remarkable trend among voters: voters continue to switch from the AK Party to the MHP. Some studies even conclude that this dynamic may have led to the MHP gaining 20% of the total votes. These studies and polls may be the reason behind the increased confidence Bahceli has shown in his relations with the AK Party and with Erdogan.

In both the constitutional referendum and the June 2018 elections we saw that with respect to opposing FETO and defending the country from future threats of terrorism, voters tend to hold the AK Party and MHP, Erdogan and Bahceli, in the same regard. The voter base of both parties constitute a “common pool” of 53% of the total vote, and the transition of voter preferences between the two parties takes place only in that pool.

The ongoing economic turbulence in Turkey gives a golden chance to the opposition parties at capturing votes from the 53% “common pool.” The CHP and Iyi Party are working hard to claim symbolically important victories against the AK Party.

Istanbul Metropolitan Municipality undoubtedly carries the utmost significance for the AK Party in the local elections. Recalling that the elected mayor of Istanbul, Kadir Topbas, was made to resign by the AK Party and President Erdogan, Istanbul emerges as a possibly problematic area for the AK Party. Formerly to negotiate with the AK Party, MHP had suggested that it would act in favor of the AK Party and not nominate a candidate in Istanbul, expecting a similar act in a different place for their benefit. However, there was not much that the AK Party could gain from the MHP in Istanbul; for the AK Party to win Istanbul, instead of MHP, the party should have focused more on the Kurdish electorate. The same is also happening between the Iyi Party and CHP, in the lines of “We should give Istanbul to them and they should give us Ankara.”

CHP wants to gain the majority in Istanbul but whether the Iyi Party alone would achieve this is uncertain. Thus, the CHP needs to attract HDP voters as the HDP does not have a meaningful chance of winning the city. However, getting closer to the Kurds has become the biggest taboo of Turkish politics in recent years. If CHP were to name a candidate that would draw the support of Kurdish voters, they would distance themselves from Turkish nationalist Iyi Party voters. But without the support of Kurdish voters, it is highly unlikely for the CHP to win.

AK Party and MHP have both been accusing CHP of “allying with terrorists” and saying that HDP is a direct extension of the terrorist organization, the PKK. This discourse is very effective among voters. Non-Kurdish voters, regardless of which party they vote for, do not have any doubt regarding the HDP’s close relationship with the PKK. All research confirms this striking political reality. Now, seeing that the People’s Alliance is in some kind of coma, will there be a change in this discourse? Will the AK Party adopt a more soft approach to Kurdish politics? We’ll see.

While search for an alliance during the local elections has ended for the AK Party and the MHP, these efforts are likely to continue between the Iyi Party and the CHP. If the opposition parties, including the HDP, manage to form a block despite their substantial differences in micro and macro policies and gain vote from the ruling bloc of the AK Party and MHP in the elections, for example reducing the 53% total vote of the two parties to around 45-47%, Turkey might enter a discussion of legitimacy that might last until 2022. The opposition may claim that President Erdogan and the AK Party-MHP majority in the Parliament have lost their legitimacy on the following morning of the elections.

The fact that the MHP and AK Party will not form an alliance in the local elections will prevent others from calculating the votes of the two parties and saying “look, this is the state of the People’s Alliance.”

On the other hand, due to the complex system of local elections in Turkey, it is hard to determine the percentage of votes a given party has received nationwide. Therefore, the real result of the election will not be determined by vote percentages but by which parties win the symbolically important municipalities and which party wins the most municipalities in total. This is why the AK Party losing metropolitan areas such as Istanbul and Ankara means a lot to the opposition.

In previous elections, the AK Party used to run a serious election campaign in Izmir, which traditionally strongly votes for CHP, but in this election it seems like the AK Party will act more defensively and prefer to focus on retaining its previous majorities. It will be interesting to watch the AK Party’s efforts to retain its popularity not only in Istanbul and Ankara but also in cities such as Antalya, Bursa, and Balıkesir.

All these constitute the reasons why this election will be decisive for AK Party’s future. If the party shows that it has retained its influence and popularity, it will prove that it has successfully emerged from the dangerous turbulence Turkey has experienced since the last months of 2013 as the “founding” party, and will continue to carry Turkey to its future. If it experiences a significant decrease in votes and fails to rejuvenate after such a loss, it will enter a period of very hard days.