What If the Worst-Case Scenario Happens in Idlib?

With the support of the EU states and the US, Turkey could convince Russia to establish a security belt in Idlib. Such a move would require Turkey to take control over a certain area in Idlib following the Euphrates Shield model. 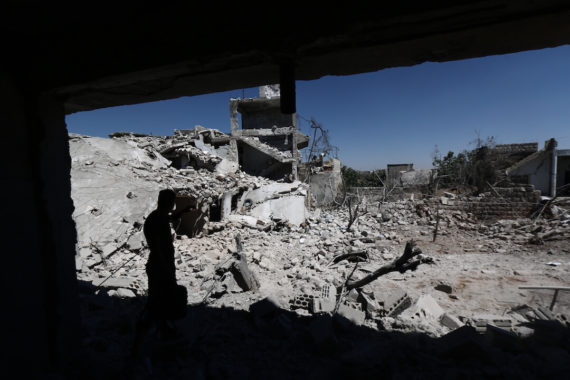 The United Nations Office for the Coordination of Humanitarian Affairs (OCHA) released a new report about humanitarian developments in Idlib, stating that 576,000 people were displaced between 1 May and August 18 in 2019. The OCHA report gives a strong warning to the world and to Turkey in particular. Since Turkey stands alone in Idlib, European states have avoided taking strategic responsibility, the US has sidelined itself and Gulf States like Saudi Arabia and the United Arab Emirates view Idlib as a zero-sum game to undermine Turkey. Turkey also failed to use any of its four options to prevent its observation posts in Morek being besieged by the Assad regime. I argued that Turkey needs a new approach for Idlib, but what if the worst case scenario happens? One where a humanitarian disaster in Idlib cannot be prevented and the UN warning that 2 million refugees may flee to Turkey occurs?

According to UNHCR, the number of Syrian refugees in Turkey has reached 3,650,000 making Turkey the biggest host country for refugees in the world. However, the situation has its burdens for Turkey. Ignoring the economical, humanitarian and political costs, social tensions within Turkish society and hate speech against Syrian refugees are increasing. As a step to manager the refugee population, authorities in Istanbul announced new regulations that required unregistered Syrian refugees to return to cities in which they were registered by 20 August. However, after demands by the Syrian community, the deadline was extended for two months. While tensions against Syrian refugees are on rise in Turkey, the prospect of a further two million refugees from Idlib would be a catastrophe.

Turkey may be forced to establish transfer routes to the Greek and Bulgarian borders, opening the way for Syrian refugees to pass into Europe.

One of the main reasons behind such a worst case scenario would indeed be that Turkey stands alone in Idlib. While Turkey has taken on the burden of preventing a humanitarian disaster in Idlib alone, the country should not also carry the burden of the costs and risks of hosting two more million refugees. Turkey needs to force the world to take responsibility. Closing the borders to Syrians who face death in Idlib is not an option for Turkey, and if the worst case scenario happens, Turkey must open its borders to Syrians. However, while Turkey has no other option but to let Syrians in, it also has no other option but to let Syrians out. In order to prevent unregistered movement of refugees inside the country, Turkey may be forced to establish transfer routes to the Greek and Bulgarian borders. In such a case, the refugee deal between the EU and Turkey would end, opening the way for refugees in Turkey to pass into Europe. The countries that rejected taking responsibility for Syrian refugees and let Turkey do so on its own would then be forced to carry some of the burden. Turkey cannot take full responsibility if such a worst case scenario were to occur even if they provided with financial support to do so.

However, a second option also remains. With the support of the EU states and the US, Turkey could convince Russia to establish a security belt in Idlib. Such a move would require Turkey to take control over a certain area in Idlib following the Euphrates Shield model. Until now, Russia and the Assad regime want a military solution for Idlib, but the pressure of European States and the US, and Turkey’s decisiveness may help to facilitate a security belt free from bombs, terrorists and Assad’s forces. A security belt would also require commitments from the EU and the US. While details like depth and timeline of such a safe zone have to be decided, the new Turkish base north of Khan Sheikhoun, where the Turkish convoy remained after raids, could be a good guide for a new line. In this context, the upcoming Erdogan-Putin meeting in Russia will determine the fate of Idlib, the fate of millions of civilians and whether this worst-case scenario will happen.