Worse – nobody really knows the actual number of Muslims tortured and killed in police custody because official figures vary widely. 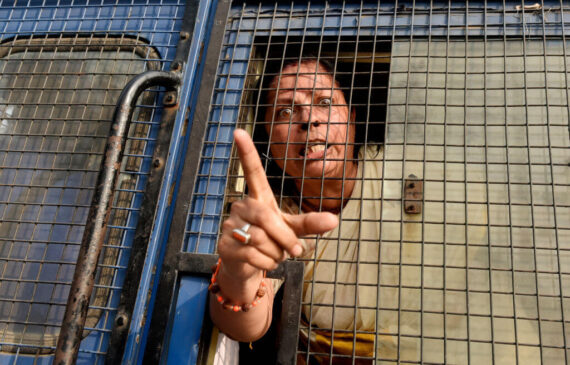 A member of All Bengal Teachers Association, shouts slogan as she was detained after a clash during the protest rally demands employment, salary and retirement plan, against the state government, Kolkata, India, 11 January, 2021. Photo by Indranil Aditya, NurPhoto via Getty Images

India’s ruling party – the Bharatiya Janata Party (BJP) – has not only been chipping away at the rights of religious minorities in the courts since taking power under Prime Minister Narendra Modi in 2014, but also in the streets, where Muslims are faced with escalating threats from roaming Hindutva radicalized gangs.

The data shows that 90 percent of religious hate crimes in the previous decade occurred after Modi was sworn into office, and that an overwhelming majority of the victims were Muslims and perpetrators Hindus.

What we are witnessing today is the mass radicalization of a Hindu majority under a regime that has made no secret of its intent and desire to transform the country’s secular democracy into a tyrannical Hindu theocracy.

Read: Zionism and Hindu Nationalism Bring Israel and India Together

At the same time the Modi Government and BJP ruled states enact laws to make Muslims second class citizens, their most vociferous supporters are lynching Muslims, Dalits and other religious minorities with a perceived sense of total impunity.

And who could blame Hindu nationalists for thinking the Indian state had given them its explicit blessing to carry out dastardly deeds.

And who could blame Hindu nationalists for thinking the Indian state had given them its explicit blessing to carry out dastardly deeds, given the way in which Delhi Police officers so enthusiastically participated in the slaughter of 52 Muslims during the 2020 Delhi Riots?

A fact-finding report into the violence cited “instances of sexual harassment of Muslim women by the cops and also instances of police engaging in direct violence and abuse” during the riots that broke out in Northeast Delhi, after a former BJP leader urged his followers to attack anti-Citizenship Amendment Act protesters.

Victims of the violence, and their lawyers, have accused authorities of pressuring them to drop their respective cases and of sabotaging the investigation by carrying out raids of law firm offices to destroy evidence against Delhi Police.

On 23 May, police raided the home of 42-year-old Mohammed Aquil Qureshi in the state of Uttar Pradesh, after Hindu locals accused him of cow slaughter. According to his surviving wife and two daughters, the police tried extorting a bribe from Qureshi, before cracking him over the head with the butt of a gun and then throwing him to his death from the home’s terrace.

On 23 May, police raided the home of 42-year-old Mohammed Aquil Qureshi in the state of Uttar Pradesh, after Hindu locals accused him of cow slaughter.

What we are witnessing here is the radicalization of the country’s police departments by Hindu nationalist forces, a reality brought clearer into view by the recent upward surge in the deaths and torture of Muslims in police custody.

On 31 May, a 21-year-old Muslim man in Haryana was tortured to death in the custody of Haryana’s cybercrime police unit. The killers not only used anti-Muslim slurs against his family members but threatened violence against them should they file a report.

“If you file a complaint, I will make your entire family like Junaid’s state”, a police officer reportedly told the victim’s brothers, according to their mother.

Sadly, he wouldn’t be only Muslim murdered in police custody that day in Haryana.

On 1 June, police in Uttar Pradesh’s Amroha are reported to have tortured six Muslim men in custody the “whole night,” after locals had falsely accused them of slaughtering an ox. One of the victims said the police boasted that even if they were to murder them, they would only be “transferred” as punishment.

A recent report into custodial torture and death across the world reveals that 1,731 people died in the custody of Indian security forces and correction officers in 2019, with most of the victims hailing from minority communities, particularly Muslims and Dalits.

The authors of the report also found that a majority of the deaths were caused by torture, and that the use of torture is “rampant” in India and meant to punish them or gather information or extract confessions.

Apart from most common methods of torture, such as punching, kicking and slapping, the study found that torture methods used by the police also included administering electric shocks, hammering iron nails into the torso, beating the soles of the feet, hanging detainees upside down and then hitting in private parts, stabbings with hand held tools, pouring petrol onto private parts, branding with hot iron rods, urinating into the mouth, inserting hard blunt object into anus and kicking pregnant women.

Arsheen Kaur, an Indian journalist, says custodial deaths must not be viewed in isolation but as a “cold-blooded play of power and class.”

“When law enforcement agencies become perpetrators of violence, it becomes an ominous case of abuse of authority and discrimination against caste and religious minorities under the privilege of impunity – all backed by a silent state,” she says.

Worse – nobody really knows the actual number of Muslims tortured and killed in police custody because official figures vary widely. For instance, the National Campaign Against Torture documented 1,731 custodial deaths in India in 2019, but the Indian government reported only 78 deaths.

This discrepancy, no doubt, caused by police departments underreporting and covering up their crimes, which emphasizes a “pressing need for separating investigation from police and entrust it to a dedicated investigation wing in order to minimize rampant corruption in the police force,” according to the National Herald.

Muslims are also forced to contend with a criminal justice system that continues to turn against them, with BJP ruled states enacting new laws premised on anti-Muslim conspiracy theories, including those that portend Muslims are forcibly converting Hindus or secretly marrying Hindu women to enlarge the Muslim population.

Last month, Uttar Pradesh police arrested Umar Guatam, a Muslim convert who became an Iman, after accusing him of forcibly converting 1,000 Hindus, despite not a single individual alleging forced conversion in his 35 years of practicing Islam.