Global food security was unstable even before the conflict due to a rising number of crises and the COVID19 pandemic. 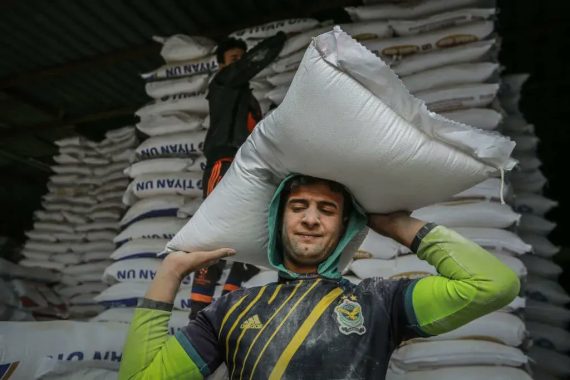 A worker piles up sacks of flour at Jamila Market, a popular wholesale market for food commodities, including flour and cooking oil. Photo by Ameer Al Mohammedaw, Picture Alliance via Getty Images

The consequences of the Russia-Ukraine war will not only revise the geography of Eastern Europe and the chessboard of international politics, but will also have an impact on the global economy.

While Europe is trying to reduce its dependency on Russian gas, the Middle East and North African (MENA) countries could experience a serious food crisis due to their high dependence on Ukrainian and Russian wheat and other grains.

Wheat is fundamental to the diet of MENA countries as it represents 37% of caloric consumption in the region. Across the Middle East and Africa, bread represents 18% of the total diet, according to Euromonitor data, while wheat price saw a 17% increase since Russian tanks entered Ukrainian soil.

The Russia-Ukraine war may cause severe shortages or even a food security crisis in the MENA region.

Following the Russian invasion of Ukraine, several MENA countries announced that the war could cause a wheat shortage as most of them import wheat and other types of grain from Russia and Ukraine.

Lebanese Minister of Economy and Trade Amin Salam said that the country—which is cash-strapped— has wheat reserves sufficient for six weeks to two months.

The Tunisian government reportedly asked officials not to address the media regarding an impending wheat crisis. However, on February 25, the ministry of agriculture had stated that it was able to secure enough wheat for three to four months.

Egypt, the largest wheat importer globally, said it has no wheat shortage. Still, it banned the export of flour, lentils, and wheat to safeguard its food, and it is exploring alternative wheat sources amid the Ukraine crisis.

Turkey has said it wouldn’t experience wheat and sunflower oil shortages. However, the war in Ukraine sparked panic buying of sunflower oil in the last week.

In Turkey, last year, 78% of wheat imports came from Russia and 9% from Ukraine. The devaluation of the Turkish lira exacerbates the country’s food insecurity. Furthermore, the rising cost of fuel and fertilizers and sanctions on Russia may disrupt the food supply chain.

How the Ukraine War Impacts Supplies

Although Moscow is seeking to encircle Kyiv and take control of northeastern Ukraine, the most active military operations are taking place in the country’s southeast.

Experts say that Russian forces are trying to secure the conduit between Crimea, annexed to Russia in 2014, and the Donbas region, controlled by Russian-backed separatist groups.

According to a map from the U.S. Department of Agriculture (USDA), most of Ukraine’s wheat crops are concentrated in the southeast.

Furthermore, Russia is gaining ground ahead of a potential assault on Odessa, Ukraine’s direct access to the sea. If Russian troops block access to the Black Sea, the supply of Ukrainian wheat to the MENA region will be disrupted. Adel Abdel Ghafar, a nonresident fellow in the Foreign Policy program at Brookings Institute, told Politics Today that the Russia-Ukraine war will hurt food security in the MENA region given the number of countries that rely on Russian and Ukrainian grain.

“The war will affect doubly non-oil producer countries, such as Egypt, Morocco, and Tunisia, because of the rising oil and gas prices,” Ghafar said.

Wheat is usually planted in the winter and harvested in the summer. The wheat being currently traded belongs to the harvest of July 2021, months before the invasion. However, the ongoing conflict in southeastern Ukraine can create a shortage for several MENA countries in 2022.

If farmers in Ukraine can’t cultivate and harvest wheat crops by July 2022 because of the war, the supply chain will be interrupted. But even if they are able to attend to their fields, there’s no guarantee that they will be able to use the necessary infrastructure to transport grain to the ports.

Food insecurity in the MENA region is a growing challenge

Even before the Russia-Ukraine war and the COVID19 pandemic, the United Nations’ Food and Agriculture Organization (FAO) estimated that over 55 million of the 415 million MENA population was undernourished.

The situation is worse in countries that suffer from conflicts, such as Yemen and Syria.

The UN World Food Program (WFP) estimates the number of Yemenis afflicted by food insecurity reached 20.7 million in 2021, with 16.2 million needing emergency food. The war in Syria has had devastating consequences: over 12 million Syrians are food insecure, an increase of 4.5 million in 2020 alone.

Due to the war in Ukraine, some MENA countries are trying to seek alternatives for their supply of wheat and other types of grain. Others, such as Syria, are rationing wheat, sunflower oil, and other essential goods.

Diversification to supply food commodities is vital for these countries as they rely on imports. But also, improving storage and investing in local agriculture would be a positive long-term approach.

However, Ghafar highlighted two important factors that play an important role in assessing the impact of the Russia-Ukraine war. They can also explain the MENA region’s lack of food sovereignty.

Demography is growing in the MENA region. According to UNICEF, half of the countries in MENA are projected to experience population increases of at least 50 percent by 2050. Therefore, governments will face serious issues in their efforts to feed everyone.

Also, the geographic location and the morphology of the MENA region don’t help countries develop an agricultural strategy that is capable of producing wheat and grain in sufficient quantity to satisfy the domestic demand.

“The Gulf Cooperation Council (GCC) countries import wheat because they can’t grow wheat crops due to hot temperatures. Other countries, such as Egypt, Algeria, Tunisia, and Morocco, cultivate wheat, but it simply is not enough to cover the big demand due to the growing population,” Ghafar said.

GCC countries are also expected to be affected by the food crisis. However, they produce oil, whose prices are surging. Therefore, they can absorb the shock.

According to Ghafar, the surge of prices and the current inflation could replicate a scenario similar to the Arab Spring when those factors also played a significant role in exacerbating the trigger for civil unrest.

Although global food security was unstable even before the conflict due to a rising number of crises and the COVID19 pandemic, the Russia-Ukraine war will impact many people’s lives in the MENA region.

Furthermore, the current international political scene has bewildered many MENA countries. Most of them have diplomatic and economic ties with both the West and Russia. Thus, they find themselves embroiled in the polarization of the conflict, and are trying to find a balance to avoid upsetting and spoiling relations with either party.

In such a political context, it will be necessary to wait and see how the sanctions on Russia will be implemented, and the impact they will have on the supply chains of wheat and other food commodities that feed the MENA region.