What's Next For the KRG After the Loss of Kirkuk?

Being successful against Daesh, capturing Kirkuk within a day and being supported by regional and international actors, the Iraqi central government could be expected to launch new operations in the short and mid-term in order to gain control over the disputed territories. 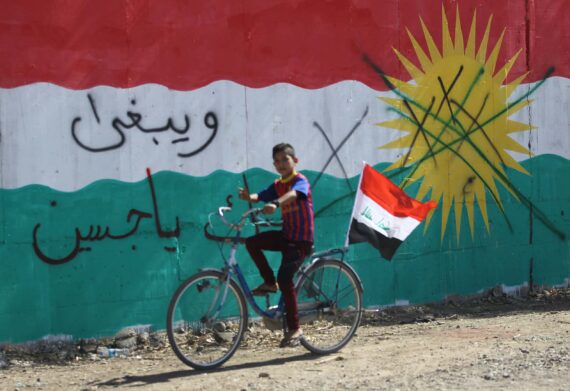 A boy rides a bicycle flying the Iraqi national flag past a wall mural depicting the Kurdish flag in the area of Dibs, west of Kirkuk on October 17, 2017, on the southern outskirts of the northern Iraqi city. Iraqi forces took control of the two largest oil fields in the disputed northern province of Kirkuk demolishing Kurdish hopes of creating a viable independent state. AFP

As a result of the Peshmerga failing to resist operations initiated by the Iraqi Army on October 16, most parts of Kirkuk are now controlled by the Baghdad administration.

Patriotic Union of Kurdistan (PUK) Peshmergas’ withdrawal with the premise of “not being as powerful as the Iraqi Army” allowed the army to march into Kirkuk with ease. While the Peshmerga Command in Erbil accuses PUK Peshmergas, it could be asserted that these events are the reflection of a political will. While certain PUK factions aligned themselves with Erbil, the Talabani family distanced themselves from the Erbil administration after the division within the party following Jalal Talabani’s sickness. It was known that the PUK was improving relations with Baghdad and Iran while criticizing the Erbil administration for monopolizing the Kurdistan Regional Government’s (KRG) revenues, administration and justice system. As the Masoud Barzani administration intended to expand its authority to Sulaymaniyah following the referendum results, the PUK, led by the Talabani family, wanted to benefit from the crisis between Baghdad and Erbil. Withdrawal of Peshmerga units from Kirkuk without resistance could be assessed as a reflection of the political power struggle within KRG. Despite statements made by some Peshmerga forces and the PKK elements in line of defense, the Iraqi Army has captured most of Kirkuk. Baghdad replaced Najmiddin Karim, who played a prominent role in escalating tensions in Kirkuk, with Rakan Saeed Ali Juburi, who is of Arabic descent. The Kirkuk Police Department announced that they are on duty, while underlining their allegiance to Baghdad. Arabs and Turkmens, who were discomforted by the KRG, welcomed the Iraqi Army’s initiative. Baghdad regained control in Kirkuk.

It should be underlined that even though Kirkuk was a “disputed territory” according to the Iraqi constitution, Erbil seized the control of the city by abusing the conjectural opportunities after 2003.

In other words, the KRG administration’s presence in Kirkuk is what is “disputed.” Despite this fact, Barzani’s emphasis on Kirkuk being a “Kurdish city” and the realization of the referendum in the city, with the support of former Governor Najmiddin Karim, clearly indicated that the KRG wanted to establish an “independent Kurdish state,” which included disputed territories, such as Kirkuk. In fact, Iraqi Kurds have shown time and time again that they were seeking for a dominance surpassing their own influence and they have clearly indicated their geographical dominance aims with the 2006 constitution prepared for the KRG.

For this reason, current events transpiring in Kirkuk and north of Nineveh region are the culmination of the power struggle between Baghdad and Erbil for the “disputed territories.”

According to the KRG and the Iraqi administrative provisions, there are 13 cities and 3 towns which are deemed as disputed territories. Some of these territories are mentioned in the 2006 Constitution prepared by the KRG. Thus, the KRG perceives certain cities and towns that are outside of its jurisdiction and under Baghdad’s control as its own. According to the 8th Article of the 2006 constitution, the following cities and towns are asserted to be within the KRG’s jurisdiction: Dohuk region; Erbil, Kirkuk and Sulaymaniyah regions; Akre, al-Shikhan, Sinjar, Tal Afar, Tall Kayf, Karkush, Zummar and the vicinity in Nineveh region; towns of Bashiqa and Aski Kalak; towns of Khanakin and Mandali in Diyala region; towns of Ba’adra and Jesan in Wasit region.

Dohuk, Erbil and Sulaymaniyah are regions with a Kurdish majority. Evaluating the disputed regions in the south of Dohuk, it could be seen that the town of Zummar in Tal Afar is under KRG control. Gaining control of Zummar after Daesh’s withdrawal, the KRG administration revealed its intention to govern Tal Afar in 2006. However, as the city mostly consists of Turkmens, the KRG was unable to do so. Moreover, the line between Dohuk and Mosul up until Tall Kayf is also under the control of Peshmerga. The destruction caused by the fight with Daesh on the line between Tall Kayf to Zummar, going around the Mosul Lake is clear, as there are ghost towns and towns lying in ruins. The KRG was also unable to gain control of Sinjar, which lies on the west of Tal Afar, towards the Syrian border. The population of Sinjar is 40% Arab, 40% Yazidi and 20% Kurdish. While the PKK, Peshmerga, and Hashd al-Shaabi control certain zones of the city, in parallel with the Iraqi Army’s operation in Kirkuk, it has been stated that Hashd al-Shaabi has gained control of Sinjar.

40 kilometers northeast of Mosul, most of the population of al-Shikhan is constituted by Yazidis and was under the control of the Peshmerga while this article was being written. Kirkuk, on the other hand, could be deemed as the most glaring disputed territory among them all, which is also the most discussed city by the Turkish public. The KRG had enjoyed an increased control over Kirkuk especially after Daesh’s withdrawal. However, Turkmen and Arab populations in the city were discomforted by the KRG administration embodied by the former governor Najmiddin Karim. For this reason, Kurds and Turkmens in the city preferred to boycott the September 25 referendum. Having the most oil and natural gas reserves among the regions desired by the KRG, Kirkuk became the very apparent fault line of the crisis between Baghdad and Erbil on October 16.

By deploying military (Peshmerga) and police (Asayish) forces to the territories it controls, the KRG has chosen to consolidate its power.

While northern regions of Mosul were captured by KDP Peshmergas, certain parts of Kirkuk, Saladin and Diyala regions were captured by PUK Peshmergas. While the KRG was initially aligned with the Iraq central government in terms of security, it has increased its autonomy throughout the process. The emergence of Daesh in Sunni-majority regions, which include certain disputed territories, enabled a new process. When Iraqi security forces withdrew from the region, including Kirkuk, in June 2014, the KRG was able to seize control of various disputed territories.

While KRG leader Barzani desired to resolve the disputed territories issue in his favor with the September 25 referendum, now he has started to lose previous gains. Entering a new era beginning with the Iraqi Army’s operation in Kirkuk, the crisis between Baghdad and Erbil indicates that further operations to other disputed territories will take place – as was suggested by the mobility in Sinjar. Being successful against Daesh, capturing Kirkuk within a day and being supported by regional and international actors, the Iraqi central government could be expected to launch new operations in the short and mid-term in order to gain control over the disputed territories. Considering that the division between the Kurdistan Democratic Party (KDP) and PUK also caused a division in the military force, the KRG will have a hard time in responding to Baghdad. Meanwhile, the schism between the KDP and PUK, which became apparent over Kirkuk might result in changes that could upset the political, administrative, social and economic balances of the KRG. Lead by the Talabani family, the PUK administration will seek to re-balance the KRG administration which is dominated by Erbil.