The spike of violence in Afghanistan will spillover to the region, and a hasty NATO withdrawal will let the country to become a hotbed of international terrorism. 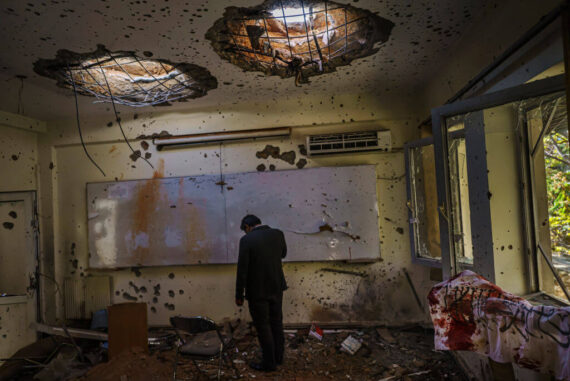 A man stands in the classroom and hangs his head low, in the aftermath of an attack on Kabul University, Afghanistans largest university, where three gunmen fired weapons and detonated explosives, concentrating their attacks in the law faculty building, the National Legal Training Center building that was equipped with the financial support of the Government of the United States of America, in Kabul, Afghanistan, on Tuesday Nov. 3, 2020. Photo by Marcus Yam, Los Angeles Times via Getty Images

U.S. President Joe Biden declared Washington’s stand on Afghanistan, “my administration strongly supports the diplomatic process that’s underway, and to bring an end to this war that is closing out 20 years.” This was the statement of the president at 2021 Munich Security Conference last week. Afghans were concerned about the U.S. new administration whether it would abandon the peace talks, withdraw its troops, or choose a third option as the target killings, magnitude bombs, and the Taliban offense has spiked across Afghanistan.

The UN Assistance Mission in Afghanistan (UNAMA) reported 5,939 civilian casualties between January and September 2020. Since last September 2020, 11 human rights activists, prominent journalists were killed in targeted attacks. Despite the U.S.-Taliban agreement and ongoing intra-Afghan peace talks, it is vital to understand how the violence spiked.

Since the U.S.-Taliban peace agreement inked on February 29, 2020, followed by the Taliban’s three-day ceasefire in May 2020, Afghans were hopeful that the violence would gradually reduce. Taliban also slow down violence in winter since the group curb due to cold weather conditions on the mountains from where they fight. Nonetheless, this winter, Afghans did not get a respite from target killings and magnitude bombs on the streets of Afghanistan.

There several rationales for the returning of violence. First, the Taliban have undertaken the strategy of talks and attacks. The group believes that augmenting attacks will give them an upper hand in intra-Afghan peace negotiations. Second, the violence spiked due to differences in the definitions of peace talks. The international community and the Afghans’ definition of peace talks with the Taliban is questing a political solution to the conflict and drawing a roadmap on the future administration.

Nonetheless, the Taliban’s perception of talks isn’t peace but convincing Washington to pullout its troops from Afghanistan through negotiations instead of the Taliban’s continued attacks on the troops.

Despite the Afghan government, religious scholars, and civil society, and community leaders calling on the Taliban for a ceasefire or reduction in violence, the Taliban are reluctant for several reasons to declare a ceasefire. Nevertheless, the Taliban would use the ceasefire as a playing card during the intra-Afghan talks for releasing of all their around 20,000 lingering prisoners and removing their names from the United Nations blacklist.

Read: The American Injustice Industry: Why Shutting Down Guantánamo is Not Enough

The civil society activists and the rest of Afghans are in the middle of violence by the Taliban and failures of the Afghan government. Civil society activists, prominent journalists, famous religious scholars are being assassinated one after another. This implying that those who raise their voice for ceasefire or reduction in violence are being targeted.

For the U.S. new administration, the urgent issue is the 14-month deadline to pullout its troops according to the U.S.-Taliban peace agreement which ends on April 30th. In a meeting with the political analysts, the Taliban political leaders in Qatar said that if the U.S. troops do not pullout by the due date, the group will give a few more days, and then the Taliban will resume its attacks on the U.S. This is implying that whether the U.S. forces leave or stay, the violence will continue spiking later in spring. If the U.S. troops withdraw, the Taliban will exacerbate the situation in order to overthrow the government of Afghanistan and return their regime.

Suhail Shaheen, Taliban’s negotiating team members in Qatar tweeted last week saying, “The aim of our Jihadic struggles is establishment of an Islamic government.” Implying that the U.S. perception of the Taliban was incorrect that they are after the U.S. to leave the country, but it is after taking power. If the U.S. troops stay post the 14-moth deadline, obviously the Taliban would resume their attacks.

After reviewing the U.S.-Taliban agreement, Washington together with NATO member states will decide about their troops in Afghanistan. Extending NATO mission and U.S. troops presence in Afghanistan will obviously dispel the thoughts that the U.S. is in a rush for withdrawal and abandoning the country to the Taliban.

It would also give a message to the group to intrinsically prepare for peace, an inclusive government, and a permanent ceasefire. Such a decision would also impact the region. The remaining NATO troops would be unpleasant for some countries of the region since the proxy war in Afghanistan is turning into a proxy peace.

Read: NATO Emphasizes Unity without Consensus but China May Change This

Implying that neighboring countries have their definition of peace for Afghanistan. Peace for Iran means withdrawal of the U.S. troops from Afghanistan since it feels threat having U.S. military bases in its eastern flank. For Russia, peace means the U.S. to face dramatic human and treasure losses. The New York Times reported that Russia offered Afghan militants bounties to kill U.S. troops.

For Pakistan, peace means that the U.S. to pullout its troops and subcontracts the Afghanistan affairs to Islamabad to administer for U.S. Islamabad might also offer to Washington to have a small number of counterterrorism forces on Pakistan’s soil in return for dollars who can engage in Afghanistan in cases of threats from the country to the U.S. However, the U.S. hasty withdrawal will inflame violence in Afghanistan.

Violence, target killings, and magnitude bombs only deteriorate the situation which will not be conducive for Afghanistan nor the region. It will ultimately deteriorate the ongoing peace process. In order to have a peaceful Afghanistan and peaceful region, countries of the region should influence the Taliban for the reduction in violence, followed by a ceasefire which would pave the way for lasting peace in Afghanistan with itself, with region, and the world. Otherwise, the spike of violence will spillover to the region, and a hasty NATO withdrawal amid increased violence will let the country to become a hotbed of international terrorism.