A deeper look at the terms according to which the new Israeli government was formed speaks of the future policy of the right-wing coalition. 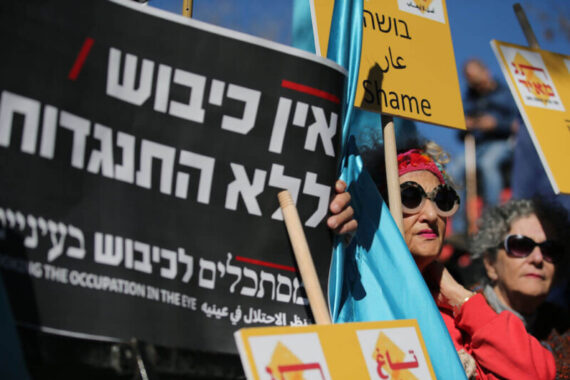 Israelis carry banners and flags as they gather in front of the Israeli Parliament (The Knesset) for a demonstration against a far-right government. Photo by Anadolu Images

he new Israeli government, the most radical in Israel’s history, poses a scary scenario for instability in the Middle East region by igniting radical discourse and action that might lead to war. Formed by Israel’s longest-serving prime minister, Benjamin Netanyahu, after five elections in four years, Israel’s right-wing government seems to be more threatening than ever, with formerly convicted Israeli politicians becoming ministers such as Itamar Ben-Gvir.

The visit stirred condemnations by several countries such as Qatar, the UAE, Saudi Arabia, Kuwait, Turkey, Jordan, and Egypt, and a UN Security Council session was held to discuss the visit, as Palestinian armed factions in Gaza threatened to retaliate. This seems to be the new norm: Israeli leaders who long advocated the construction of settlements on Palestinian lands, the execution of Palestinian political prisoners, and house demolitions are now the decision-makers in Israel. Having right-wing politicians as ministers in Israel will likely translate into more displacement of Palestinians, military confrontations with Gaza, and military incursions into the West Bank.

A deeper look at the terms according to which the new Israeli government was formed speaks of the future policy of the right-wing coalition. The new Israeli government will increase the salaries of Israeli soldiers by 20%, rewarding even soldiers accused of killing Palestinians – this appears emblematic of its policy towards the Palestinians in the Occupied Territories. The policy is a continuation of an old tradition of blaming Palestinian victims for their own death. The murder of 32-year-old autistic Palestinian Iyad Al-Hallaq in Jerusalem in May 2020 by an Israeli soldier, and the praise he received by then Israeli Justice Minister Avi Nissenkorn as “professional handling of the issue,” is just another example.

The Israeli government aspires to promote the Abraham Accords and expand them to include other countries, but is facing serious challenges especially after the public relations disaster Israel suffered at the World Cup in Qatar and the unprecedented pro-Palestinian support shown by football fans there, which made many Israelis feel shocked. The issue with Israelis is that they feel more shocked by people’s reactions to their actions than they feel ashamed about continuing the occupation and causing unlimited suffering to the Palestinian people.

The Israeli government also seeks to reach a deal with the United States to allow entry into the country without a visa for Israelis. The plan, however, is hitting a wall because of Israel’s treatment of Palestinian-Americans visiting Palestine and sending many of them back. Most likely, a visa-free entry to the U.S. for Israelis will remain a pipe dream as long as Israel does not take concrete actions to end its mistreatment of Americans of Palestinian origin, such as the shooting and killing of Omar Asad, 78, in the West Bank in January 2022.

The agreement based on which the Israeli government was formed highlights the “natural right of the Jewish people to the land of Israel.” Thus, the Israeli government will take the necessary measures to implement Israeli sovereignty over the West Bank, keeping in consideration Israel’s diplomatic and international situation. This translates into a formal declaration of the death of the two-state solution, which Palestinians gave up a long time ago, although their leadership says otherwise. The Israeli government will also decide on the legality of Israeli settlement outposts within two months of its formation, and it pledges to provide these illegal settlements with the needed infrastructure to thrive. This includes legalizing the Homesh settlement which Israel withdrew from in 2005 as part of its unilateral plan to withdraw from Gaza.

Read: Israel Will Not Grant Palestinians a State: What Should the PLO Do?

The Israeli government will also change a previous law that allowed Israel to give back property in the West Bank purchased by its “enemies” before 1948. This will allow the Israeli government and settler groups to take over these properties as “enemy properties.” The government will also maintain Israel’s sovereignty over Jerusalem, and combat all efforts made by the Palestinian Authority to have any presence in the city.

The Israeli government will invest in the Golan Heights as strategic geography, which is a violation of international law as the territory is considered occupied under international law and is part of Syria. It is worth mentioning that the text of the Israeli coalition agreement does not include the Golan Heights, where the government plans to allocate resources for expanding the settlements, as part of the “Land of Israel.”

The Israeli government plans to punish the Palestinian Authority for taking actions against Israel’s illegal practices at the International Court of Justice (ICJ) and the International Criminal Court (ICC) by withholding Palestinian tax money which Israel has the final control over according to the Oslo Accords of 1993. This includes salaries paid by the PA to the families of Palestinians killed or held by Israel.

The Israeli government will encourage a law that will allow it to withdraw Israeli citizenship from Palestinians who live in Israel, which is an unprecedented move that will open the door for displacing more Palestinians from Israel. Today, some two million Palestinians live in Israel, and they hold Israeli nationality that were imposed on them in 1966 by Israel.

The Israeli government will ban raising Palestinian flags at governmental or local institutions supported by the state. The fact that the text of the agreement refers to the Palestinian flag as the “Palestine Liberation Organization’s (PLO) flag” is in itself very telling.  It is a declaration of war against anything Palestinian which is a continuation of Israel’s long-standing policy of negating the Palestinian national identity and treating Palestinians as foreign in their own country. The Palestinians who hold Israeli nationality and face daily violence are viewed by the Israeli state as lacking personal safety rather than an ethnic minority that is facing eradication.

The above is not strange as the Israeli government only sees Israeli settlers as legitimate residents and provides them with all the necessary tools to thrive in the settlements at the expense of the Palestinian people. The Israeli government will only cause more violence in the region, and it might cause a religious conflict sooner than many might think. The United States and the European Union are urged to speak up against the current Israeli government which publicly declares that Palestinians are not safe or equal under its exclusionary laws.

Also Read
Farha Is A New Milestone for Palestinian Cinema