Why Turkey Does Not Have a Real Opposition Party

The post-2002 period figures as the acceleration of Turkey’s evolution into a total state. This fundamental transformation in state-society relations has urged political parties to reconsider their political positions and discourses. The most radical change has taken place with the CHP. 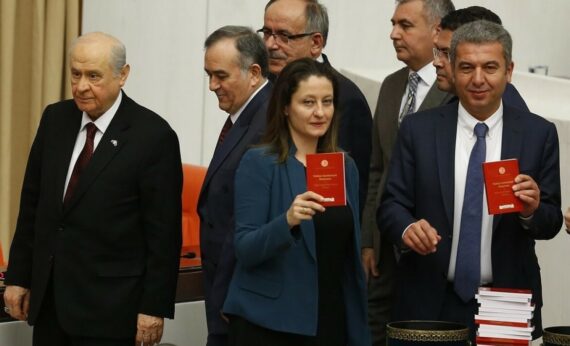 Turkish politics has flared up after the Justice and Development Party (AK Party) and the Nationalist Movement Party (MHP) have jointly proposed a constitutional reform bill. The reform bill seeks to move Turkey’s government system towards presidentialism. It introduces a severe system of checks and balances, or separation of powers by splitting the elections and operation of the executive and the legislative. The rationale behind this political move, as in many occasions allegedly voiced by the AK Party, is to avoid coalition governments and promote democratic politics as opposed to a bureaucracy. The AK Party asserts that coalition governments carry the danger of political instability and jeopardize democratic politics by opening up room for extra-political forces such as the bureaucracy.

Turkey’s main opposition party, the Republican People’s Party (CHP), takes the lead against the reform bill. The CHP focuses on the end results of the system change and criticizes the amendment by arguing that it will turn Turkish politics into an authoritarian regime. Its main thesis is that it is likely to abolish the parliament and put an end to the republican regime. Yet, a closer look at the content of the reform bill reveals that the parliament will be intact. Nevertheless, it will lose its centrality after the center of gravity in the government system slides towards the executive. So this change does not pose a transgression on the republican order; on the contrary, it may reinforce the republican regime by boosting equality among citizens and giving a central role to the society in politics.

A closer look at the content of the reform bill reveals that the parliament will be intact.

Turkey’s Odyssey to the “Total” State

The Turkish state’s transformation from being a neutral state to a total state took place in a gradual manner. In the long nineteenth century (1808-1923), the monarchy was enervated by the bureaucracy and finally left its place to the republic in 1923. Although Turkey was established as a republic, at least in theory, it was an oligarchy in practice. So the state remained a neutral state for a long time. The bureaucratic oligarchy in Turkey might be divided into two periods. The one-party regime until 1950 and a multi-party parliamentary regime under the bureaucratic tutelage from the 1950s to the 2000s.

The general elections in 1950 were the first open and free elections of the republic. After the elections, the state opened up its doors to the society by allowing a multi-party parliament. The parliament, which used to be populated by merely the CHP, started to host the Democrat Party (DP). The DP attracted the support of the voters in the periphery and held the parliamentary majority with its successive electoral victories until the 1960 military coup.

The 1961 Constitution drafted after the coup redesigned the state-society relationship. It created a parliamentary system under the supervision of the bureaucratic elites. The parliamentary system under the tutelage of the bureaucracy limited the intrusions of society into the state. This was facilitated mainly by dividing the parliament into two chambers. The upper house was populated by the appointed members of the bureaucracy and served to control the lower house which hosted the representatives of the people. This was endorsed by installing more bureaucratic institutions to contain the political sphere.

The 1982 Constitution, on the other hand, redesigned the state-society relationship in a new format. It was drafted after the 1980 military coup, which came after the Kemalist state lost control of the society and that led to bloody clashes between the far-right and the far-left societal groups in the streets. The 1982 Constitution, therefore, gave emphasis to the executive branch in order to strengthen the state vis-à-vis the society. It divided executive power between the president and the cabinet of ministers. The president’s main role was to keep the cabinet and the parliament in line with the state.

After 2002, the AK Party started to dismantle the bureaucratic tutelage. The 2007 constitutional reforms introduced direct election of the president by the people. It thus transformed the presidential office from being the gate keeper of the bureaucracy to being the representative of the society. The president used to be elected by the parliament with the bureaucracy’s tacit permission. This was followed by the 2010 constitutional reforms that further curbed the bureaucratic tutelage by reforming the judiciary, especially limiting the powers of the military courts. The current reform bill seeks to continue this process of democratization by opening up the state to societal forces by moving the regime towards presidentialism.

The Crisis of the “New CHP”

The post-2002 period figures as the acceleration of Turkey’s evolution into a total state. This fundamental transformation in state-society relations has urged political parties to reconsider their political positions and discourses. The most radical change has taken place with the CHP.

Despite the fact that it has never won an open election to form a single-party government, the CHP’s secular-nationalist Kemalist ideology has always been in power. Hence, the CHP has always sided with the state in critical times against the society. It single-handedly ruled the state under a one-party regime during the period of 1923-1950. After 1950, it acted to protect the state from the intrusion of societal forces based in the periphery. Thus, it has strived to contain the parliament and placate democratic politics in order to maintain the “Kemalist” state.

The CHP’s struggle to protect the Kemalist state was carried out on the basis of its secular-nationalist ideology until around 2010.

The CHP’s struggle to protect the Kemalist state was carried out on the basis of its secular-nationalist ideology until around 2010. In 2010, the CHP not only changed its secretary general, Kemal Kılıçdaroğlu replaced Deniz Baykal, but also it started to shape its politics around liberal-democratic ideology. With the liberal turn, the so-called New CHP has moved its politics from the protection of the state to the limitation of the state. More specifically, the CHP started to utilize liberal-democratic discourse in order to interrupt Turkey’s evolution to be a total state.

It has sought to form a political bloc with the anti-AK Party societal elements. The sole success of this liberal-democratic politics might be cited as the general elections held on 7 June 2015. For the first time the AK Party could not gain a parliamentary majority to form a single-party government. However, the other three political parties in the parliament also failed to carve out a coalition government. This led to a replaying of elections on 1 November 2015. The elections resulted in a landslide victory for the AK Party. This was the starting point of the crisis of the New CHP.

However, this was followed by the gradual increase of terrorist attacks on Turkish soil. The PKK, the FETO, and Daesh have targeted the country. The most important breaking point was the failed coup attempt perpetrated by the Gülen terror group on 15 June 2016. After 15 June, Turkish society united against terrorism, which was dubbed as “Yenikapı Ruhu,” or the Spirit of Yenikapi, referring to a historic rally against the coup. Yet, this climate of societal unity soon ended and political parties divided into two opposing blocs. The AK Party and the MHP joined forces on the basis of a conservative-nationalist ideology, or so-called “authentic and national” politics (“yerli ve milli” siyaset). The CHP and the pro-Kurdish People’s Democratic Party (HDP), on the other hand, formed a tacit political bloc on the basis of a secular-leftist ideology. This has deepened the crisis of the New CHP.

The CHP-HDP bloc struggles to contain the AK Party-MHP’s joint project of reforming the state through empowering the executive by moving the government system towards presidentialism. The former constitutes the “NO” bloc whereas the latter the “YES” bloc on the current constitutional reform. If the “NO” camp loses in the coming referendum (which will probably be held in early April) and the presidential system is institutionalized, Turkey’s gradual evolution to a two-party political system around the division between conservative-nationalist and secular-leftist ideologies, which is currently underway, will continue and consolidate.

The CHP-HDP bloc struggles to contain the AK Party-MHP’s joint project of reforming the state through empowering the executive.

In this picture the CHP may stop swinging between liberal-democracy and secular-left ideologies by downgrading its emphasis on a liberal-democratic discourse, which mainly serves to limit the state and locks the CHP into being merely an opposition party. Thus, it may move secular-left ideology more into the center of its party politics. If that happens, then, it marks the end of the New CHP and perhaps causes a rift in the party’s leadership. Nevertheless, the CHP will have to take a more centrist and positive political discourse by moderating its emphasis on secular-left identity to become an alternative under Turkey’s new political conditions.