We inhabit a post-socialist, post-liberal, and multipolar world order today. This environment is very propitious for the flourishing of a "third way" thinking. 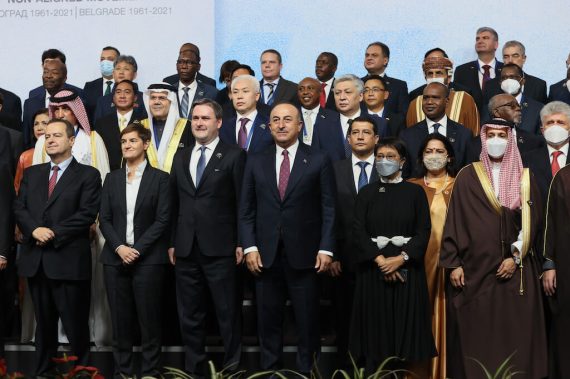 Participants pose for a family photo in the summit held on the 60th anniversary of the establishment of the Non-Aligned Movement in Belgrade, Serbia on October 11, 2021. Photo by Cem Ozdel, Anadolu Images

The hegemonic interpretation of the Cold War has been a struggle between a capitalist and liberal democratic Western bloc led by the United States and the North Atlantic Treaty Organization (NATO) on the one hand, and a communist Eastern bloc led by the Soviet Union and the Warsaw Pact on the other. It is certainly true that this depiction covers the two most significant alliances of the Cold War in terms of their military and economic capabilities.

However, this interpretation writes off a third category of countries, which constituted a much larger group than either the Western or the communist bloc in terms of their population: the Non-Aligned Movement (NAM). Inspired by the Bandung Conference in Indonesia in 1955, and formally established in Belgrade, Yugoslavia, in 1961, it was initially spearheaded by a number of Third World leaders including Nasser, Nkrumah, Nehru, Sukarno, and Tito, the leaders of Egypt, Ghana, India, Indonesia, and Yugoslavia, respectively.

Only three years later, led by the NAM, the “Group of 77” (G77) was established on June 15, 1964 by 77 developing countries signatories of the “Joint Declaration of the Seventy-Seven Developing Countries” issued at the end of the first session of the United Nations Conference on Trade and Development (UNCTAD) in Geneva. These countries already then represented, and even more so represent today, a very sizeable percentage of the world’s population. They included dozens of recently decolonized African and Asian countries as well as a few Latin American countries, but almost no European ones with the notable exception of Yugoslavia.

Read: Is This the Geopolitical Moment Africa Has Long Anticipated?

The NAM was not at all a one-off attempt by a group of developing, and mostly postcolonial, African and Asian countries trying to justify their refusal to ally with the Soviet Union or the United States. Rather, it was a notable step in a series of systematic and recurrent attempts and designs to chart a “third way” for what came to be known as the Global South.

These efforts continued with a call for economic justice and the need for a New International Economic Order (NIEO), culminating in the United Nations General Assembly’s (UNGA) “Declaration on the Establishment of a New International Order” on May 1, 1974.

The NAM, G77, and NIEO stoked the idealism of those who aspired to a world government.

The NAM, G77, and NIEO, launched by the same group of countries, represented the “third way” during the Cold War, and claimed the mantle of an activist kind of “neutrality.” Their activism brought energy and symbolic relevance to the UNGA in particular, with a flurry of UNGA resolutions condemning various gross violations of human rights. The NAM, G77, and NIEO also stoked the idealism of those who aspired to a world government based on the United Nations (UN), while also motivating spirited calls for a reform of the UN.

This was a sign of how seriously the UN was taken by some political and social actors at the time, especially in the Global South. These efforts contrast with the widespread cynicism vis-à-vis intergovernmental organizations, and especially the UN, at present.

How “neutral” was the NAM, and how successful was it at achieving its lofty goals? From the very beginning, the NAM was accused of being much closer to the pro-Soviet bloc both ideologically and geopolitically than to the pro-American bloc, and thus not truly neutral. The fact that communist Yugoslavia, along with socialist-leaning Egypt under Nasser and India under Nehru, were among the three leading founders of the NAM is one indication in this direction.

The prominent position communist Cuba, which is widely considered a Soviet ally, assumed in the NAM by the 1970s, is yet another. In fact, Cuban leadership explicitly considered the Soviet Union as the natural ally of the NAM, although many other members disagreed with this argument.

Even since the end of the Cold War, the NAM summits have been taking place in countries that are particularly known as allies of Russia such as Cuba, Iran, and Venezuela. Thus, major Soviet and Russian interventions in the Global South, such as the Soviet invasion of Afghanistan starting in December 1979 and continuing for a decade, and the Russian intervention to suppress the Syrian opposition since September 2015 (and continuing), expose the seemingly insurmountable rifts among the NAM members.

Similarly, the unabashedly autocratic and repressive policies of some member states, including massacres and systematic executions of ethnoreligious minorities and/or opposition groups in Egypt, Iran, Myanmar, Syria, and Venezuela, among others, contradict the principles of justice, fairness, and equality that they espouse at the international level.

“The world is bigger than five,” a slogan coined and popularized by Turkey, with the aim to reform the UN and especially the United Nations Security Council (UNSC) dominated by the five great powers that won World War II, rekindles a tradition that reaches back to the NAM. This might come as a surprise since Turkey has been a staunch ally of the United States and one of the oldest members of NATO with the second largest military in the Western alliance.

Moreover, Turkey is not even a member of the NAM or the G77, which makes Turkey’s recent enthusiasm to coordinate and mobilize the Global South for a reform in global governance even more significant.

In a special issue of Perceptions, the academic periodical of Turkey’s Ministry of Foreign Affairs that debated Turkey’s grand strategy, which I edited, I suggested that Turkey’s role should be that of a “third power,” supporting the independence and territorial integrity of its neighbors that have been occupied by the two rival global and regional alliances spearheaded by the United States and Russia.

The United Arab Emirates and Iran are the countries spearheading the regional operations of these U.S.-led and Russia-led global alliances, respectively, and the disastrous consequences of their interventions are observable most clearly in Syria and Yemen.

Middle powers and some former great powers are looking for a third way since the end of the US-led liberal international order and unipolarity.

Many other middle powers and even some former great powers are looking for a “third way” at present, especially since the end of the U.S.-led liberal international order and unipolarity, for which 2016 is often considered as the turning point with Brexit and Donald Trump’s election in the United States. Brazil under Lula da Silva could be considered another such example of a rising regional power that sought a third way in the emerging multipolar world order.

The efforts of Muslim countries to get together to defend their common interests and to stop genocidal massacres or the mass internment of Muslim minorities from Bosnia to Myanmar, and Kashmir to Xinjiang are yet another such example.

Having moved from a world order of liberal-socialist bipolarity (1945-1991) to one of a liberal unipolarity for about a quarter century (1991-2016), we arguably inhabit a post-socialist, post-liberal, and multipolar world order today. This is an environment, both geopolitically and ideologically, which is very propitious for the flourishing of a “third way” thinking, not (only) of the Tony Blair-Anthony Giddens variety, but along the lines of South-to-South cooperation as previously observed.

The experience of the NAM, however, also provides cautionary tales about the hijacking of such attempts at international solidarity by one or the other of the two great power alliances (such as the Soviet bloc) as well as benefiting autocratic regimes that deny the basic right to vote and competitive elections to their own citizens at home in the name of progressivism.

Also Read
On Colonialism and Solidarity: The Decisive Israel-Palestine Battle under way in Africa