Ukrainian President Zelensky ended his emotional address to the Russian people, which he made in Russian, by asking, “Do Russians want war?” 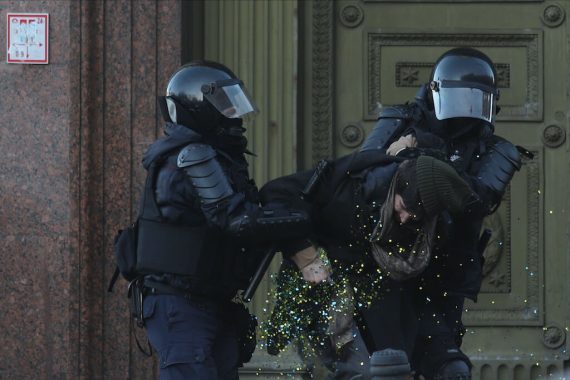 Security forces detain a protester during an anti-war demonstration in Saint-Petersburg, Russia on March 6, 2022. Photo by Stringer, Anadolu Images

On the early morning of February 24, Russia announced a “special military operation” in Ukraine, a move that was described by U.S., European, and other world leaders as a Russian invasion which the Kremlin had no right to carry out. On the same day, thousands of Russian citizens gathered in the squares of major cities chanting anti-war slogans.

The most massive anti-war protest was held in Moscow in Pushkin Square. It was joined by more than 2,000 people, mostly aged between 18 and 30. According to local reporters, around 20-30 people were detained by police. In St. Petersburg, on February 24, there were around 1,000 protesters, and nearly 250 were detained, including a deputy of the “Malaya Okhta” movement, which was founded by the deputy delegates of the district after which it was named. On the same day, the wave of protests swept across other Russian cities and regions including Yekaterinburg, Omsk, and East Siberia.

On Saturday, February 26, people in St. Petersburg and Yekaterinburg took to the streets again. Many chanted “Stop the war” and stated they were ashamed of Putin’s decision. On the same day, in Yekaterinburg, a group of people gathered for a demonstration supporting Russia’s invasion of Ukraine. The sit-in was approved by the police.

The Russian police did not react as severely as was expected. Protesters in Yekaterinburg and Moscow said the police officers were more or less polite and did not behave violently. Yet, some brutal reactions by the police were reported by Oleg Dilimbetov, a Kommersant correspondent in St. Petersburg, who said they “grabbed everyone who took out a poster, broke into the chanting crowd, dragging people on the ground, including women.”

There were also anti-war protests in Russia on the Internet. A petition on Change.org, created on Thursday, February 24, demanding an “immediate ceasefire by the Russian armed forces and their withdrawal from the territory of the sovereign state of Ukraine,” gathered nearly 850,000 signatures with 300,000 people singing the petition in the first few hours of its launch. Among the signatories were renowned Russian actors, movie directors, cultural celebrities, politicians, and ordinary Russian citizens.

The nature of Russian anti-war protests

To understand the nature of the anti-war protests in Russia, it is enough to remember the close cultural and ethnic ties between Ukraine and Russia. At least one third of Russians have relatives in Ukraine, according to Levada-center, Russia’s major nongovernmental polling and sociological research organization. Many of those who took to the streets confirmed the same fact: they either had far or close family relationships with people in Ukraine, including the self-proclaimed Donetsk and Luhansk regions.

Second, protests in Russia were spontaneous and not organized. No one expected the situation to deteriorate so quickly. According to Andrey Rusakov, the director of the Center of European and Asian Studies at the Ural State University of Economics in Russia, the nature of protests does not have a systematic character.

“The majority of protesters who went on the streets are students at Russian colleges and universities. We see it with our own eyes and with the media reports coming from different Russian cities. It’s natural as the young generation are most vulnerable to breaking news and shocking events,” Rusakov told Politics Today.

“Moreover, there is still a large number of people, loyal to Putin’s regime. They are mostly middle-aged citizens who remember the Russia-Afghanistan war and the Russia-Caucasus war,” he added.

The majority of protesters who went on the streets are students at Russian colleges and universities, Rusakov told Politics Today.

Limited information has been revealed on Alexei Navalny’s supporters, a Russian opposition leader, among the protesters. This is mainly because pro-Navalny leaders are currently abroad and there is literally no one who could rally the opposition movement. Even though opposition media outlets and social media platforms have been active in recent days, their agenda has not changed much since the arrest of Navalny.

Finally, the current anti-war protests in Russia are fundamentally different from those held in 2014 amidst the country’s annexation of Crimea. Back then, there were clashes of the two opposite movements: people who supported the Crimea annexation and the ones who were against it. Those two groups went to the streets at the same time, while the dates of the protests were known in advance.

Behind the 2014 public demonstrations, there were mainly economic reasons and mistrust against the authorities. Many people believed that Russia was organizing protests to distract people’s attention from the financial crisis and the significant drop of the Russian currency. Now, the anti-war protesters are against military action and the loss of human life.

What does Russia want? What do Russians want?

The nature of the Russia-Ukraine conflict in 2014 was different than the one we have today. The annexation of the Crimea, according to the Russian authorities, “was in full accordance with the international law and was without a single drop of blood.”

Today, the scale of the conflict is much larger. It is more than just Russia-Ukraine. While at the very beginning, there were two opposite social groups in Russia – the supporters and opponents of the military operation – now the general public attitude towards the war is negative.

Ukrainian President Volodymyr Zelensky ended his emotional address to the Russian people, which he made in Russian, by asking, “Do Russians want war?” He stressed that Russians and Ukrainians are different, but that’s not a reason to be enemies.

Yet, the speech of the Ukrainian president did not have much effect on Russian society. And here is why: Zelensky does not have much authority as a political leader among Russians. A comedic actor in the past, his speech seemed to mimic Putin’s style, something that many Russian users commented on under the video.

Second, Zelensky addressed the Russian people asking them to stop the war, but the decision to start the military operation was made solely by the Russian president, even without informing ministers who work closely with him. Looking back at the Crimea process, many Russians understand there is no going back from the current operation, whether they like it or not. As a result, there is a high degree of uncertainty and lack of information as to what might happen next.

The conflict between the “European” West and the “Russian” East in Ukraine goes back to the early 2000s, long before 2014. The southeast regions of Ukraine are behind the largest portion of the country’s budget but have traditionally been against joining NATO.

The western regions have supported EU integration and tended to stand apart from Russia in every possible way; for example, the national status of the Russian language in the western territories of Ukraine was abolished. Nationalism movements in Ukraine started in the early 2000s, and gradually became more influential among Ukrainian people.

As a result, people in western Ukraine started considering themselves as privileged, while residents in the east essentially provided for the economy but were treated as second-class citizens. This resulted in regular clashes between Ukrainians and the demonization of the country’s eastern parts, including Donetsk and Luhansk. After the annexation of Crimea by Russia, the conflict was further aggravated.

A possible scenario of ending the war today is admitting the “neutral status” of Ukraine, the phrase that has been used by Zelensky in his appeal for negotiations. Russian President Vladimir Putin responded immediately, suggesting a meeting of the two countries’ delegations in Minsk. According to Andrey Rusakov, Russia may also be planning to change the political regime in Ukraine with the assignment of a pro-Russian political figure.