Why the approach towards terrorism in the West is just wrong. 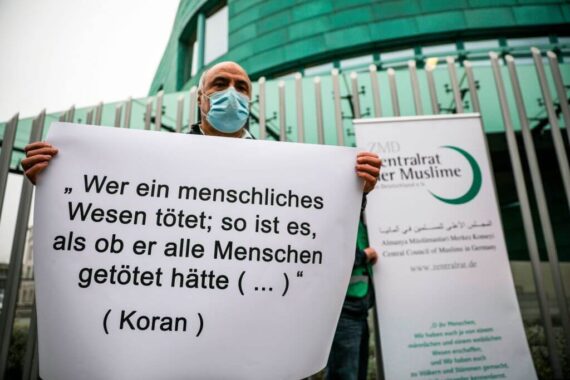 A participant holds a placard with a verse from the Quran reading 'Whoever kills a human being, it is as though he had killed all mankind...' during a vigil remembering the victims of the terrorist attack in Vienna, outside the Austrian embassy in Berlin on November 6, 2020. - Austria is mourning four civilians shot dead by a 20-year-old Islamic State sympathiser who attacked a popular nightlife area in the heart of Vienna on November 2, 2020, on the last night before a second coronavirus shutdown. Photo by OMER MESSINGER/AFP via Getty Images.

Attempts in the West to combat terrorism allegedly related to Islam suffer from three serious flaws: terrorism is attributed to Islam in general; governments believe that they can handle it all by themselves; and they rely almost exclusively on criminal law.

Terrorism is supported only by a few and rejected by many

First of all, among political and media circles, terrorism is often portrayed as the inevitable outcome of a “clash of civilizations.” In this view, Islam is regarded as being incompatible with Western values. This position is exemplified by the statement made by French President Emmanuel Macron last year that Islam needs to come to terms with Enlightenment. In so doing, the French president lost sight of the fact that Enlightenment has actually incorporated key elements of Islam, such as tolerance, which was a hallmark of the Ottoman Empire, and human reason, which was introduced by Ibn Rushd.

The “clash of civilizations” discourse denies that Islam has contributed significantly to Western civilization. The West owes much of its knowledge in the area of the natural sciences and medicine to Muslim scholars. Although the Renaissance is often seen as the result of Europeans rediscovering classic Greek and Latin texts, it actually relied heavily on the work of Muslim scholars. Not only had they saved the texts for posterity by translating them into Arabic, they had also further refined and developed the ideas contained therein.

Read: Radicalization and Religion: How It Happens?

This “clash of civilizations” position also fails to recognize that according to Islam, Muslims who live as minorities in non-Muslim countries are supposed to respect the government, obey the laws, and fit into society. As soon as Muslims apply for a visa, a residence permit, or citizenship, they enter into an agreement, under which they are supposed to discharge their duties loyally towards the state.

The large majority of Muslims relate such a jihadist view to a biased and distorted interpretation of religion.

In return, the government is supposed to ensure their freedom of religion. Therefore, instead of trying to domesticate Islam by replacing it by a state-sanctioned, watered-down version of this religion, governments should respect Muslims’ freedom of religion and allow Islam to do its remedial work.

The truth is that only an extremely small number of Muslims take part in terrorist activities with the conviction that the governments in many Muslim-majority countries are corrupt because they fail to rule in accordance with Islamic law. They believe that these regimes are being supported by Western states. By stretching the theological notion of jihad beyond its limits, these militant extremists feel justified in fighting Western governments as well as the regimes and governments in Muslim countries.

The large majority of Muslims relate such a jihadist view to a biased and distorted interpretation of religion. Therefore, to marginalize these militant views, the Muslim community, rather than secular outsiders, should be relied upon to challenge and correct them.

Governments are ill-suited to tackle this problem

The second position assumes that governments are best suited to tackle terrorism conducted in the name of Islam. This is a surprising position for two reasons. First, secular governments in the West usually lack the knowledge of grasping the theology of militant jihadism. Second, in principle, they are not supposed to intervene in religious affairs under the separation of church and state.

To bypass these theological and constitutional obstacles, governments instead rely on a psychosocial approach which assumes that Muslims can gradually develop from moderation to militancy. In their view, this transition becomes visible by increasing piety and observable changes in dress. These two function as indicators of radicalization, which must be undone through “de-radicalization,” i.e., by deprogramming “radicalized” Muslims through psychological treatment to turn them into model citizens.

The concepts of “radicalization” and “de-radicalization” were developed as quick fixes after 9/11, to make terrorism manageable to law enforcement in the U.S.

The concepts of “radicalization” and “de-radicalization” were developed as quick fixes after 9/11, to make terrorism manageable to law enforcement in the U.S. Consequently, their academic credentials are weak and no conclusive evidence exists to show that they actually work.

On the other hand, this approach has huge drawbacks. It creates suspicion: why to trust your nice Muslim neighbors if they could one day turn into violent radicals? In addition, it puts an onus on pious, orthodox Muslims who are actually allies in combating militant jihadism because they condemn and reject it on theological grounds.

Moreover, Western governments’ unilateral tackling of this religious extremism feeds into the propaganda of the militant jihadists, who claim that these governmental measures aim at destroying Islam. Last but not least, policymakers are trying to fit a secular square peg into a round theological hole, which is bound to fail.

Relying on criminal law is counterproductive

Thirdly, Western governments believe that relying on criminal law is the best way to tackle terrorism, and many anti-terrorism laws have been enacted for this purpose. These are not, like ordinary criminal law, aimed at the rehabilitation of those who have gone astray, but at incapacitating them, so that they can no longer pose a threat. This is what Günther Jakobs has called “enemy criminal law.”

The power to revoke the nationality of terror suspects in order to keep them abroad – and consequently turn those suspects into the concern of other countries – is an example of such incapacitation. Anti-terror laws violate the same principles of the rule of law which they are supposed to uphold.

These laws select suspects on the basis of group characteristics; construe the intentions of the perpetrators instead of judging them on their acts; and intervene at a very early stage when the suspects have not even begun to put their plans into practice. This legal approach also stigmatizes Muslims as a “suspect community.”

An alternative approach is both necessary and available

In view of these three shortcomings, an alternative approach needs to be developed which acknowledges first and foremost that only a small number of militants with a religious affiliation engage in terrorist acts. This approach should also take Islam and the Muslim community as allies in fighting against terrorism. And lastly, the new approach should set aside criminal law and seek different means to tackle the issue at hand.

To this end, the Cross Cultural Human Rights Centre at the Free University of Amsterdam, in cooperation with the Dutch Muslim community, has developed such an approach which has been translated into a project proposal. As part of this project, young Muslims will be made more familiar with the opportunities offered by democracy and the rule of law to channel grievances and realize ambitions. They will be given the chance to brush up their knowledge of Islam to enhance their ability to see through the propaganda of recruiters.

Their labor market prospects will be enhanced by offering employment application courses. Accessible publications will be produced to counter the propaganda by militant jihadists. To ensure that mosques will be capable of offering stiffer competition to militant organizations, professionalization programs will be taught to their administrators.

Imams will receive training on how to deal with the emotional problems of their young believers. And those who have been convicted for terrorist crimes will be brought to renounce violence with the help of Islam through intensive one-on-one instruction by Islam scholars.

Currently, discussions are taking place with the Dutch government on the possible implementation of this project proposal, while authorities and Muslim communities in other countries have showed an interest. Hopefully this marks the beginning of a new approach to tackling terrorism committed in the name of Islam 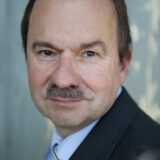 Tom Zwart is Professor of Cross-cultural Law, Utrecht University. He is the
Director of the Cross Cultural Human Rights Centre, Free University of Amsterdam.