Today’s France instead of creating a multi-ethnic and multi-cultural country, a model of integration, it replicates the former attitude towards Jews this time against Muslims in the 21st century. 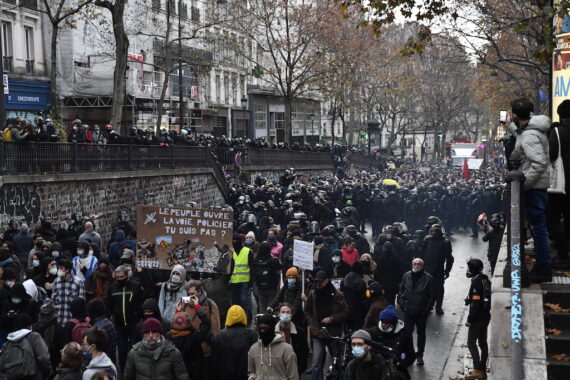 French president Emmanuel Macron gives a positive definition of laicism: “Laicism is the freedom to believe or not believe. The freedom to practice religion as long as it doesn’t disrupt public order, which is guaranteed by the state. And this is the cement of a united France.”

Macron stresses again and again, “The problem and the danger is separatist Islamism.” But when he says, “We cannot victimize Muslims with the stigmatization of polemicists and extremists,” he actually spills the beans! Since right-wing extremists are not the soldiers of laicism and what they practice is cultural racism, when we look at the discourse of the president we see that the problem is precisely “a matter of identity, conditions of being proper French.”

Whatever this being French is, in Algeria under French colonial rule those who took off their headscarves and became Catholic or fought against their own people in the French army in order to overcome half-citizenship status, never really became French. But the state still tries nevertheless. The first thing to do was to ban and impose sanctions on practices of Islam as much as possible. We will be able to see these in the bill of December 9, “115 years after the 1905 Act” as the president says. One article has already been revealed.

According to the bill of Minister of Interior Darmanin, if a man or a woman rejects being examined by a doctor of the opposite sex, they will be sentenced to imprisonment of up to five years and a fine of 75,000 euros. Yet, France recognizes Catholic doctors’ right to decline to perform abortions because of their religious beliefs. No matter how firm and strict a state is, like France’s authority today aimed at Muslims, how close can it get to reaching its goal by banning or punishing?

Read: French Youth and the Far-Right: When Will the Culture War Begin?

The French president is clearly serious when he talks about getting to the bottom of the issue. Whatever is deemed to be incompatible with the republic, regarding the beliefs and practices of Muslims must be eradicated. How can that be? A French Islam will be invented, everything suspected to be incompatible with the republic will be assumed foreign.

As a matter of fact, Macron means this when he says, “Islam will be freed from foreign influences, imams from other countries won’t come to France,” and “[i]mams fully compatible with the values of the republic will be trained in France.”

Just like François Hollande, Macron thinks there were no Muslims in France when the 1905 Act, which is considered to be the foundation of laicism, was enacted. However, Madagascar and Algeria were French colonies at the time. Ultimately, France did not need a protocol similar to the agreement with the Catholics to define its relationship with Muslims at the time for the addressees were not citizens!

Macron keeps saying that Muslims came “to our land” during the 1960s-70s. The expression “our land” reveals the fact that Muslims are not accepted as “real” French citizens.

Today, Macron once again echoes the fact that Muslims were not accepted as French citizens when he says Muslims came during the 1960s-70s and keeps using the expression “to our land.” It is debatable whether he is aware of it or not, but it seems he wants a hierarchical Islamic structure similar to Catholicism.

A structure like Shi’ism in Iran! There will be an imam leading all Muslims, who will obey every order by the imam. Moreover, the state will create this structure that it will also control.

For this purpose, in 2003, when former President Sarkozy was still the Minister of Interior, the French Council of the Muslim Faith was founded. (It seems to make little difference if the government is rightist, socialist, Macron’s administration, or any other party. This is a long-term project that will allow Muslims no respite.) But the French Council of the Muslim Faith had a relatively pluralist structure and seemingly did not meet the government’s expectation.

Now the addressee is invented to a large extent. This addressee is the Foundation of Islam in France founded in 2016, the successor of the Foundation for Islamic Works in France founded during Villepin’s premiership in 2005. In any case, during his presidency, Sarkozy talked about a notion called “French Islam” and not the “French Council of the Muslim Faith.” On the other hand, Macron does not use the term “French Islam”; he prefers a more rhetorical term, “Enlightenment Islam”!

Tareq Oubrou: “The French culture does not want to see the headscarf. Then, Muslims should act like a chameleon wrapping itself in the colors of nature.”

Regarding the answer to the question “How and who will enlighten Islam for France?”, the president of the foundation Ghaleb Bencheikh seems to be the chosen one. He is a physician of Algerian descent but most importantly he is the ideal imam France is looking for. Last year, in an interview for the magazine Marianne, he said, “The headscarf attacks woman’s human dignity.” He also complained by saying, “Unfortunately homosexuality is convicted in the Qur’an,” and stated that women can be imams, and men and women can pray in the same row.

In his various interviews with the French media, a member of the same foundation, the imam of Bordeaux, Tareq Oubrou, defended the idea that Muslims need to be invisible. “The French culture does not want to see the headscarf. Then, Muslims should act like a chameleon wrapping itself in the colors of nature.”

Emphasizing the importance of modesty, Oubrou said, “The headscarf means you are Muslim, and it attracts attention. But Islam says not to attract attention. You cannot expect a Muslim to be a prophet. Just as Allah is not visible; the angels are not visible.” And in case anyone had any doubts, he added, “Also, if we are living in France, we have to accept whatever the society we’re living in accepts – even if it is against Islam. That is the real Islam.”

Another Muslim member of the foundation is Hakim El Karoui of Tunisian descent from the liberal Institute Montaigne. Last year, he published a 617-page report titled “The Islamist Factory” imitating a work titled “The Islamophobia Factory.” Macron’s colleague from his years at Rothschild, El Karoui wrote a study on how to create “French Islam” at the request of the president.

As for how Karoui views the issue, both his statements in various interviews and the primary questions of the field study published in his report answer the question. They are about “the headscarf, halal meat, the issues of virginity and submission to men, and how many times Muslims go to the mosque.”

In short, today’s France instead of creating a multi-religious and multicultural country, a model of integration that will accept Muslims’ differences, which could in turn reinforce their sense of belonging to the republic, it replicates the former attitude towards Jews this time against Muslims in the 21st century. This plan cannot be named as a plan to combat “Islamist Separatism.” It should be named as “Fight to Create More Separatists.”

Also Read
“We Are Scared of Our Own Shadow”: An Interview with Raphael Liogier on Islamo-Paranoia in France