The dissatisfaction with the two establishment parties is substantial, and is hardly a new phenomena. But the establishment of a third political party has not reached a tipping point for several reasons. 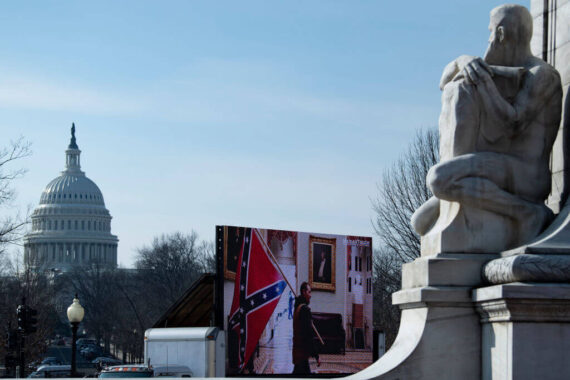 A screen shows images of a pro-Trump mob taking over the US Capitol building on January 6, 2021 before the second day of former US President Donald Trump's impeachment trial before the Senate on Capitol Hill February 10, 2021, in Washington, DC. Photo by Brendan Smialowski, AFP via Getty Images

A widely-covered Gallup poll in mid-February found support for a third party at a highpoint. This was apparently fueled in substantial part by talk of a “civil war” within the Republican Party following Donald Trump’s second impeachment.

The dissatisfaction with the two establishment parties is substantial, and is hardly a new phenomena, Theodore Lowi wrote The End of the Republican Era in 1995. But it has not reached a tipping point for several reasons, particularly because any typical move toward a third party will be seen as helping one or another of the current establishment parties and is thus resisted. The Democratic and Republican parties get most of their electoral backing because people hate or fear the other.

This has been a regular theme in US politics. When Ralph Nader ran in 2000, for example, he tapped into a great deal of popular sentiment. But his campaign was widely derided as threatening to help get George W. Bush elected. And, among other factors, it may well have helped that eventuality the way his campaign was conducted. This dynamic has continued to be a major factor in hindering the prospect of any party emerging beyond the low single digits from either the left or the right and will in all probability remain so.

VIDEO: How the Republican Party went from Lincoln to Trump

A solution I have put forward — never adopted by any candidate — is outlined at VotePact.org: An independent candidate can break out of this “spoiler” dynamic by drawing on support equally from disenchanted Democrats and disenchanted Republicans.

This is not as far fetched as it might first seem, evident in the realm of foreign policy, among others.

Barack Obama won the presidency in 2008 with a great deal of media generated excitement largely based on his stated opposition to the invasion of Iraq, overtly backed by Hillary Clinton, John Kerry and Joe Biden.

Of course, Obama himself gained national prominence by giving the Keynote address at the DNC convention in 2004 which nominated Kerry. He nominated Hillary Clinton as his secretary of state, kept Bush’s secretary of defense, Robert Gates, and escalated interventionist policies such as drone killings, war in Libya and more intervention in Syria and elsewhere.

Barack Obama won the presidency in 2008 with a great deal of media generated excitement largely based on his stated opposition to the invasion of Iraq, overtly backed by Hillary Clinton, John Kerry and Joe Biden.

Similarly, Trump won the presidency in 2016 largely because of massive establishment media coverage. During his campaign he generated excitement by deriding the invasion of Iraq, mocking Jeb Bush and his entire family, promising an “America First” approach and appealing to isolationist sentiments that clearly resonated with many USians. He also had parallel pseudo populist rhetoric, such as taxing hedge funds.

But when he became president, Trump’s major foreign policy accomplishments furthered the goals of the US establishment, often in ways that a more conventional president never could have.

In fairness, as with Obama, there were some shifts in foreign policy with Trump. Chris Woods of airwars.org acknowledged — the day Biden was inaugurated — that Trump had significantly reduced some aspects of US interventionism, noting that Biden would be “inheriting US military actions at a post-9/11 low. The US declared around 1,000 strikes last year across four theatres – down from 13,000 under Obama in 2016.”

But, in toto, Trump can in fact be regarded as the opposable thumb of the Empire: He appears to be opposed to it, but just helps it grab more. For example, Trump derided NATO as antiquated, echoing a sentiment of many more authentic anti-interventionists, but the net result of his “crit” was to compel European states to actually pony up more money to NATO, effectively strengthening — not weakening — the military alliance.

Trump of course brought in hyper interventionists like John Bolton, Mike Pompeo and Elliott Abrams. While he did not start a new war — a novelty for recent presidents — he facilitated the US as Empire in numerous ways.

Trump escalated devastating sanctions against Iran and Venezuela. His moves regarding Israel and Saudi Arabia, breaking various arms control treaties, making the Space Force a full military “service”, got the US establishment things it clearly wanted but decorum wouldn’t allow.

Thus, Obama, posing from the left, funneled voters toward the establishment while Trump did much the same from the right.

This became apparent at current Secretary of State Anthony Blinken’s confirmation hearing. Blinken credited the Trump administration’s “Abraham accords” which strengthened the ties between Israel and various Arab monarchies and delighted in using the Trump administration’s pulling out of the Iran nuclear deal as leverage over the Islamic Republic. Meanwhile, Biden seems set to follow all other recent administrations in refusing to acknowledge Israel’s nuclear capacity, ignore the pleadings of Archbishop Desmond Tutu to acknowledge Israel’s nuclear weapons and use US law to halt funding it

The role of presumably progressive sectors in the Democratic Party are likely to be marginal. Biden’s re-entering the Paris accords and tepid stepping away from the most brazen aspects of the Saudi attack on Yemen are likely to be high points of accomplishment these factions can claim some credit for — and such moves may well have multiple motives.

The two-party system has effectively portioned out Samuel Huntington’s “Clash of Civilizations” world view, with much of the Republican party, at least selectively, treating Latinos and Muslims as a menace while the Democratic party has gone to great lengths to demonize Russia/Orthodoxy in recent years. Both effectively cast China as a menace.

Sen. Tom Cotton is well positioned with respect to the critical issue of our time: The origin of the pandemic. Much of establishment liberal, and indeed so-called “left wing” opinion has dismissed the possibility of lab origin of the pandemic as a “conspiracy theory” and thus ceded the issue to the xenophobic rightwing. This may well have disastrous consequences in the coming years and decades.

There seem two possible avenues to substantial change in terms of US foreign policy. One is the rise of global movements, perhaps modeled on the Feb. 15, 2003 quasi global protests shortly before the invasion of Iraq.

The other likely challenge to the current paradigm of US establishment global dominance is a re-alignment within the US. If authentic sectors from the left and right can cooperate in a manner that is not delusional — doesn’t pretend that they agree on everything — then there are possibilities for meaningful change.

The left and right often have different reasoning and even language, but largely agree on non-interventionism, lessening the power of corporate trade deals such as NAFTA, civil liberties, the power of transnational corporations as opposed to more “Main Street” businesses. If a steady stream of analysis coming from left and rightwing figures can manifest such agreements it could have several beneficial outcomes.

At minimum, it can help focus on actual policy that affects people’s lives rather than the personality driven media obsession with political personalities. At maximum, it could pave the way for a winning political movement that draws from the left and right and backs candidates representing their shared interests — and politically activates millions who have, with cause, given up on politics accomplishing anything real.

Even the threat of such a possibility would give the electoral bases that the Democratic and Republican parties claim to represent increased leverage against the establishment interests that have helped ensure that US government policy served their ends for so long.

Sam Husseini is founder of VotePact.org. His writings are at husseini.org.