In the last three years, one of Turkey’s most important advantages has been its natural gas exploration in the Eastern Mediterranean. 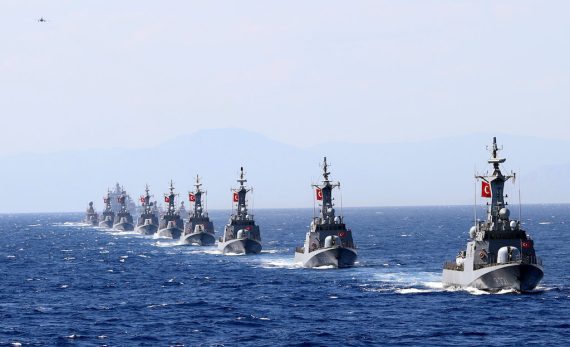 The year 2021 has witnessed an escalated tension in the Middle Eastern and European security complexes. Early this year, Saudi Arabia and Greece strengthened their bilateral cooperation. Simultaneously, France encouraged Greece to increase its armament while blaming its European partners for turning a deaf ear to the threats the European Union is facing.

France, Saudi Arabia, and Greece seem to have twofold gains from this cooperation. They could both better materialize their energy cooperation and target Turkey’s gas explorations as well as challenge Turkey’s maritime superiority in the Middle East and Eastern Mediterranean.

Since early 2021, Turkey is voicing its concern over the Saudi F-15s to be based in the Souda air force base in Crete. The first quarter of the year signaled a potential escalation regarding the military drills to be conducted in the Aegean Sea. Turkey’s chief objection was to the Saudi F-15s that would be piloted by Greek lieutenants during military drills.

In February 2021, the Philia Forum brought Gulf states such as Saudi Arabia, the UAE, and Bahrain together to integrate into the pre-established Greek-Egypt-Cyprus cooperation. The main actor behind this initiative was Saudi Arabia. France conducted the White Shark 21 maritime drills, which symbolized the new hawkish stance against the Turkish energy pivot in the Eastern Mediterranean.

Military drills jointly conducted by France, Greece, Israel, Cyprus, Egypt, Saudi Arabia, and the UAE in the heart of the Aegean Sea are obviously a significant development. The dynamic of this alliance is issue-specific and narrow-scoped; however, it has a potential to attain short-term goals.

In the last three years, one of Turkey’s most important advantages has been its natural gas exploration in the Eastern Mediterranean.

In the last three years, one of Turkey’s most important advantages has been its natural gas exploration in the Eastern Mediterranean, which created political complications with states such as Greece, Egypt, Israel, Cyprus, and France as well as with institutions including NATO and the European Union. The current balance of power created room for maneuver for Turkey which is now being constrained by rival energy-seekers such as France, Italy, Greece, and Israel.

In April 2021, Saudi Arabia and Greece signed a defense cooperation agreement which will be initiated with a Greek Patriot deployment to Saudi Arabia. The new status quo in the Eastern Mediterranean is taking its final form as France sided with Greece, Israel, Egypt, Saudi Arabia, and the UAE, and formed a forum of military cooperation against the Turkish pivot in energy-seeking. Turkey’s alliance formation was limited to Algeria and the Libyan Government of National Accord (GNA), while limitations from the European power also hindered the process.

At that moment, it seemed that the Turkish-Saudi reproachment had little chance of revival in the short term. Developments since September 2021 show that MBS has a personal stance against President Erdoğan, which might be a reason behind the failed rapprochement attempts. The effects of the past incidents are apparently strong and thus impede diplomatic and bilateral progress.

France is also encouraging cordial relations between Egypt and Greece in the hope of eventually creating a geopolitical crescent blocking Turkey’s access to Libya and Algeria.

Greece is pushing Saudi Arabia and France for a broader alliance formation. However, this effort is impeded by the French plans of bringing the UAE and Bahrain closer to Greece. France is also encouraging cordial relations between Egypt and Greece in the hope of eventually creating a geopolitical crescent blocking Turkey’s access to Libya and Algeria. The present situation has a potential to cause a stalemate in the energy explorations in the region.

Read: Who is Concerned about Turkey’s Military Capacity in Greece?

Nevertheless, this alliance has been forged to preserve the status quo, and an stalemate might be an actual gain for the guarantor states such as France. There are two interrelated motives behind the French foreign policy: defense exports and international prestige. France is a leading actor in defense exports and tries to be an alternative to the United States.

Greece and Israel try to increase their political influence to protect or obtain bargains from the European search for more reliable energy sources.

In the last three years, France has been the second-largest defense exporter to Saudi Arabia after the U.S. For the last 5 to 10 years, only the UK has been able to compete with France. Besides, Greece and Israel try to increase their political influence to protect or obtain bargains from the European search for more reliable energy sources. There are a lot of pull factors of entering such a dynamic such as increased resolve to engage in conflict, better military resources, and the higher chance of deterrence, etc.

Such circumstances create a potential conflict on the Turkish maritime borders in the Eastern Mediterranean. It seems like the age-old Turco-Greek debate on the naval border is going to evolve into a bitter rivalry over the control of the Eastern Mediterranean energy flow. Certain stakeholders such as energy providers like Egypt, Algeria, and Israel will set the tone for which side will have the wind at its back.

Turkey can become a trendsetter by discovering natural gas reserves. It might also play a transmitter role with a plan that bypasses Cyprus and Greece, and transfers the Eastern Mediterranean gas directly to the EU. In this context, the problem for the gas alliance builders in the Eastern Mediterranean seems to be Turkey’s potential to be simultaneously a trendsetter and a transmitter.

Turkey’s potential to attain this power is perceived as a threat by its rivals. From an international relations perspective, such conflicts are quite natural; the most formidable alliance will once again force the other to succumb to its demands.