The Turkish Presidential System, which is the center of the proposed amendment, puts limits on the powers of the president and parliament, especially in terms of their relation with each other, and also aims to preserve their spheres of power from intervention by the other. 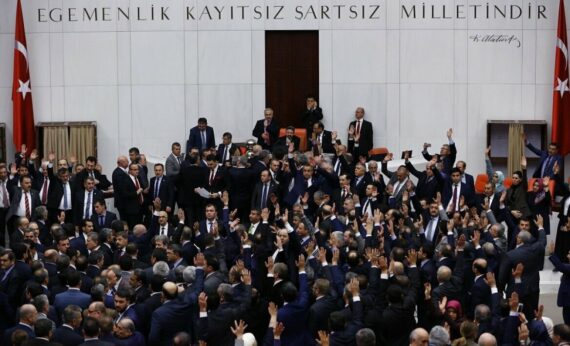 In the previous days, the Justice and Development Party (AK Party) and Nationalist Movement Party (MHP) built a consensus on constitutional amendments and prepared a draft solution for an issue which has occupied the political agenda in Turkey for years. The draft aims to change the governmental system, not the regime, and aims to solve intermittent crises created by the parliamentary system in Turkey.

IslamophobiaBy Mert H. Akgun
The draft currently being debated in parliament focuses on the essence of the relationship between the legislative, executive and judicial branches and the primary features of a presidential government system. Called the Presidential System indigenous to Turkey, the draft aims to discuss the design of checks and balances between state branches. In this context, there are two points vital for ensuring majority support in the parliament for the president: the timing of constituency and presidential elections, and the formula for presidential elections. After that, other checks and balances instruments, the decree power of the president, the power to repeat elections for both parliament and president, and the procedure for budget preparation can be discussed.

There are two attitudes towards how the timing of elections effect the majority support of the president in parliament. The first one argues that concurrent constituency and presidential elections could create a problem in terms of checks and balances, and such an election could mean both a majority of parliament and the president could be elected from the same political party.

The other argument is that the possibility of differentiation between the president and parliament would increase if elections were held at different periods. Especially, this possibility could become evident with runoff elections. The consequence of this difference would be a parliament that reflects the political mood at one point, but not at the point when the president is elected, leaving the two bodies out of step with public will.

A considerable part of criticism against the current amendments argues that they leave the legislator with little power against the executive. The supporters of this argument state that concurrent elections for the legislator and executive would lead to a political majority in both branches from the same political side. However, while empirical research based on comparative examples supports this argument, some research also shows that there are experiences which prove this argument wrong.

Even more, as the system is presented in the current amendment, runoff elections in the presidential system could reduce the occurrence of a political or ideological divide in state organs, thanks to coalitions based on popular political figures, especially in the second round of elections. So, the argument that such a system would lead to a single party dominating both the executive and legislative branches, should not be accepted as an absolute given.

Moreover, there is a reasonable argument for justifying the amendment: getting rid of instability created by the current parliamentary system. There are some executives working with a political majority in the legislatures that are from an opposing party. This situation is called a divided government, and leads to a deadlock in the system, especially for tasks that require cooperation between the legislature and the executive. So, concurrent elections should be evaluated in terms of solving this problem.

Another issue of synchronism between the legislature and executive is having the same expiration date for these state organs. If this was the case, it would be possible to prevent the occurrence of an asymmetric balance of power between them, a situation which draws attention to another issue in the proposed amendment: a mutual power to call new elections for the presidency and the legislature.

One of the weaknesses of the presidential system is the possibility of a deadlock because of a strict separation of powers and related with that, a situation where both organs cannot cease the existence of each other. Apparently the amendment aims for the avoidance of the threat of deadlock in the system by granting the power to call new elections to both the president and the parliament.

Clearly, the proposed solution is not a common mechanism in current global examples, where presidents generally have the right to unilaterally call for a new parliament, called a rescission of parliament. Presidential systems in which presidents have the right to unilateral rescission, especially in Latin America states, experience regime crisis frequently, and when presidents are elected from non-political figures, meaning presidents who are not popular, the risk of a crisis increases. In practice, different political ideologies in the branches of power could ease dissolution, and in such systems, there are no constitutional mechanisms to safeguard against this problem. There are not many examples of this power for the president or legislator in presidential systems. Today, the constitutions of some countries in Latin America, such as Peru (article 134), Ecuador (article 148) and Venezuela (article 236) give this power to presidents.

For example, article 12 of the proposed amendment envisions a mutual renewal of elections. According to the draft, the Turkish Parliament (TBMM) can decide on new elections with a 3/5 ratio of total members, and in this case, the election of both branches is done together, and this concurrency is also valid if the decision to hold new elections is made by the president.

With this proposed amendment, the parliament and president would have the right to call for fresh elections. Thus, presidents do not solely have the power of dissolution of government, but either the legislator or the executive could decide for new elections, and as the amendment proposes, such elections would be for both branches, preventing this decision being made in an arbitrary manner. In effect, whoever decides to call for fresh elections must themselves be confident they will win power again.

Runoff Elections for the President

Part of the amendment, which is not so different from the current system, suggests runoff elections for president. In the first polling, if any candidate cannot win an absolute majority, there will be a second poll in which the two candidates who have the highest votes in the first poll would compete. In this poll, the candidate who has the plurality of votes will be elected as president. This ensures that there will be reconciliation (no matter the vote ratio in the first poll) on the winning candidate. So this situation would strengthen the democratic legitimacy of the president.

According to a survey of current global systems, presidents as the head of the executive have the power to publish regulatory administrative acts to carry out or develop policies. In the United States, for example, the constitution does not give power to decree law directly to the president, but they use this power based on Article 2 of the constitution. These enactments, called “executive orders,” are administrative acts and also very important instruments for building various institutions, organizing or changing bureaucratic processes and executing laws which have already been approved by the legislature.

In the Turkish amendment being currently considered, there is a proposal to give the president power to enact such orders. According to Article 9 of the amendment, which aims to change article 104 of the current constitution, the “president can publish an enactment on executive issues.” In the same article, there are restrictions and rules on this power that preclude any such enactments from effecting:

These restrictions and rules circumscribe the limits of executive orders, and will not violate legislative power, a major criticism of enactments being they could act as a de facto legislative power. Certainly, the same criticisms can be made of the power to publish statutory decrees by the government in the present system, and governments could publish these statutory decrees under empowering laws which are passed by parliament. So, according to the amendment, the president could have this power without empowering law.

However, it should be considered that current presidential systems are based on a strict separation of powers. Even more, the requirement of taking permission from parliament by the presidency as an executive position cannot be compatible with the spirit of a presidential system. At this point, it could be said that the limits of presidential enactments are not clear in the amendment. For instance, in article number 9 in the draft, there is a regulation with the issue. These regulations aim to prevent any damage to fundamental rights and freedoms that could be done by enactments. In the amendment, fundamental and individual rights and duties, as already enumerated in other parts of the constitution, are preserved clearly. On the other hand, presidential enactments could be published dealing with social and economic rights as enumerated in the second part of the third section of the constitution.

Finally, the state budget is a way of interaction between the legislative and executive branches in many governmental systems. In presidential systems, this interaction becomes more powerful and important because the strict separation of powers creates a relationship based on mutual checks and balances through the budget.

The proposed Turkish amendment gives the authority to prepare budgets to the president, and this prepared budget needs the approval of parliament, as is the case in many presidential systems in the world today. Thanks to that, the legislator has the right to reject a budget prepared by the president when it deems it necessary. In this situation, the president could prepare a new and temporary budget according to the revaluation rate.

There are major mechanisms for ensuring checks and balances in the new system which are: 1) Concurrent constituency and presidential elections, 2) Concurrent renewal of elections, 3) A time limit for terms of office, 4) Runoff elections for presidents, 5) The power to publish enactments by the president on limited issues and under the supervision of the Constitutional Court to develop and execute policies, 6) And budget preparation as a power of the president but at the same time needing the approval of parliament.

In short, the Turkish Presidential System, which is the center of the proposed amendment, creates differentiations from the current system, not only institutionally but also in terms of the construction of checks and balances. This feature puts limits on the powers of the president and parliament, especially in terms of their relation with each other, and also aims to preserve their spheres of power from intervention by the other.

Serdar Gülener received his graduate and MA degrees from the Public Administration Department at Sakarya University. For his PhD research he investigated the democratic legitimacy problem of the Turkish Supreme Court and focused, as a case, on the Constitutional Judiciary and Parliament Relations. As an Assoc. Prof. he currently teaches at the Faculty of Political Science at Sakarya University.