"Sometimes I feel robbed over a life I should have had. Over a family I might have had. I don’t feel like a whole person." 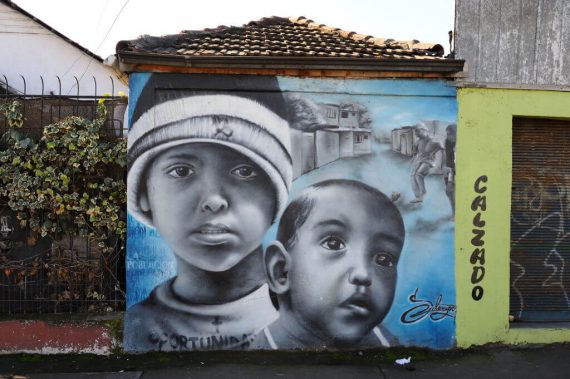 Mural painting and graffitis in the La Victoria area of Santiago de Chile. In 50 years, its inhabitants built an alternate city, resisted to dictator Augusto Pinochet, and continue to trace ways to leave the néo-liberal model on July 08, 2017, Chile. Photo by Frédéric Soltan/Corbis via Getty Images.

Since 2017, Judge Mario Carroza has been investigating the illegal adoptions from Chile which are estimated to number over 20,000 from the 1950s to the late 1990s. The judicial investigation so far has revealed that several professionals in trusted positions, such as doctors, social workers, religious persons and judges, were complicit in the trafficking network. So sophisticated was the network, that 19 juvenile court, 28 health centres, 24 religious or private homes, as well as 72 buildings in Chile were used as nurseries to host children pending their adoption. Mothers, meanwhile, were fed lies by professionals, including that their children were deceased, in order to sever any possibility of searches and reunification.

The US-backed Chilean dictatorship of Augusto Pinochet is well known for the neoliberal experiment unleashed upon the country. Against a backdrop of torture and disappearances which alerted the world to human rights violations in the country, the Pinochet dictatorship sought to embellish its image. Promoting a veneer of welfare was an integral part of its propaganda, and children became the unknown victims of an intricate trafficking network which facilitated the illegal adoption of minors to foreign countries.

Between 1971 and 1992, it is estimated that over 2,100 Chilean children were illegally adopted to Sweden. In October 2021, Swedish Social Affairs Minister Lena Hallengren announced an investigation into the adoptions. This comes after several years of the Swedish media reporting about irregularities in adoption documents.

Read: Australia’s Collaboration with the CIA in Chile Remains Shrouded in Secrecy

Initial research in Chile pointed towards the Swedish Adoption Centre as facilitating the adoptions between both countries. Diplomatic relations between Sweden and Chile during the Pinochet dictatorship was marked by a right-wing campaign to combat the image portrayed by Chilean exiles which was vocal about the human rights violations in the country. The Sweden-Chile Society, which espoused fascist ideology and collaborated with Chile over the surveillance of exiles, was instrumental in facilitating ties between the dictatorship and the Swedish Adoption Centre.

Adoption became a policy for the Chilean state – a means through which Pinochet could establish diplomatic ties in countries where large communities of Chileans had sought exile.

Adoption became a policy for the Chilean state – a means through which Pinochet could establish diplomatic ties in countries where large communities of Chileans had sought exile. Between 1978 and 1988, the dictatorship institutionalized forced adoption through the National Plan for Minors

Charlotta Haggren was adopted to Sweden on January 1, 1974. She was the pilot case for adoptions from Chile to Sweden, according to Anna Maria Elmgren – a Swedish woman who worked for the Swedish Adoption Centre and whose name has been linked to several illegal adoptions.

Haggren says that her adoptive parents wanted to adopt a Chilean child and they presented their request to a Swedish organization called “Adoptions Centrum.” In the beginning of 1973, Haggren says, her adoptive parents contacted Elmgren. “Together they started a long and quite intensive correspondence about the upcoming adoption. In one of the letters, Elmgren said that my case was a pilot case for her.”

It took until October 1973 for Haggren’s Swedish adoptive parents to specify their request. “According to my papers, I was born on May 24, 1973 in Santiago de Chile,” she says. “The official version of how I ended up adopted is that I was born in a hospital and my mother ran away after giving birth to me. I still don’t know my birth mother’s name.”

“Yet in another version, and which was told to my adoptive father when he came to Chile, I was from Temuco,” Haggrenn adds.

The irregularities surrounding adoptions made it difficult for the afflicted families to trace each other. Parents were given one version of why they ended up childless, while a different narrative was invented to justify the adoptions. Haggren was also transferred between several homes prior to her departure to Sweden. “All this took place under the Pinochet regime in Chile,” Haggren points out. “My father stayed at Elmgren’s house until my adoption process was finalized. He was very afraid when he was in Chile because of Pinochet. There were soldiers all over the place, he told me. And he was traveling around Santiago to get the passports stamped and my papers finalized.”

“Children shouldn’t be handled like goods,” Haggren asserts. “It is abusive against children and their birth parents, and also puts the adoptive parents in a complicated situation, having done everything in good faith from their side.”

It was only after listening to a radio program about the illegal adoptions that Haggren decided to learn more about her origins. The Adoptions Centrum which handled her adoption process only had four pages on information on file, which she had a hard time obtaining. Her visit to Chile in 2004 yielded no results. Last year, with the help of Chilean Adoptees Worldwide (CAW), an organization that formed in 2018 in response to the investigations in Chile headed by Judge Carroza, Haggren managed to obtain her birth certificate, as well as an address in Santiago.

CAW serves as a platform for adoptees globally. Many adoptees do not speak Spanish, having been brought up away from their home country and distant to news from Chile. The organization’s first concern was to bring news related to the illegal adoptions to the adoptees by means of their website, in English.

One of CAW’s main objectives nowadays is family searches and reunions. Alejandro Quezada, CAW’s founder, explains that a connection with the past, to establish what happened is important, notable the separation of children from the mothers and the ensuing abductions.

Currently, Quezada adds, the connection between adoptees is crucial. He explains that many adoptee groups may focus on different issues. “But one can see that one of the subjects is the “getting out of the fog”, understanding that the history they were always told about their adoption, might perhaps not be true. Or they know isn’t true because they found their biological family who tell the other side of the story which doesn’t coincide with what the adoptee was always told. Today, when adoptees get connected to our network and are looking for the truth, it is their believe there could be more to it and they look for like-minded adoptees from the same birth country to reflect with and understand their history more in depth.”

Quezada reflected upon how the investigations in Sweden are an important link in order to establish what went on Chile. “CAW as a platform is and will remain to be connected with the deputy who helped to have this investigation to start up. In case that we can offer anything in any form that can help the investigation move forward, then we will provide that, taking into consideration the privacy of the persons in case it would be personal information.”

“Because it is important that Sweden tries to get the truth to the surface like they did in the Netherlands, it is of the utmost importance that information is shared in order for the investigation team to have a clear picture of history in intercountry adoptions. We will be awaiting the outcome of the Swedish investigation while remaining actively involved in initiating similar investigations with other European countries and governments. Once the results of the Swedish investigation are being published, we will most likely have in depth conversations with the people who initiated the investigation to look into further steps towards the Chilean part of it. Taking into consideration that today, Chile is the only country who send their children away to be adopted abroad and is investigating their history towards this crime against humanity,” Quezada explained.

On the Sweden investigation, Quezada notes, “Any result of the investigation will have an impact. Not only on the adoptee but on the whole adoption environment currently in place in Sweden. Also, any investigation and their results of a government into intercountry adoptions is not only being followed by adoptees who live in that country, but by adoptees worldwide. Question remains, what will be the following steps of the government after the results have been published. Which action will be taken to future generations if any.”

Read: Colombians Took to the Streets to Face Taxation, But It Will Not Stop There

For Haggren, discovering the facts behind every adoption from Chile to Sweden is imperative. “I think it would be a great victory for the adoptive children from Chile if the Swedish investigation inspects each case thoroughly. So we know that we are finally heard and not forgotten. Hopefully this investigation will prevent such illegal adoptions from happening again. I feel the investigation should have been started a long time ago.”

The vacuum in between the adoption and the investigations take their toll on adoptees, in particular psychologically and in terms of belonging. “I had a wonderful upbringing and a wonderful life here in Sweden,” Haggren says. “But I’m tumbling in unawareness. I don’t know about my heritage. I don’t know who I look like. I can’t go to the doctor without getting questioned about my heritage, and then I am not able to answer because I have no background information about my health situation.”

Haggren concludes with the pain of ambiguity – a loss that cannot be quantified.

“Sometimes I feel robbed over a life I should have had. Over a family I might have had. I don’t feel like a whole person. The question, “What is?” is a question that I ask myself a lot.”