Possible scenarios of a Chinese “amphibious” invasion of Taiwan in 2026. 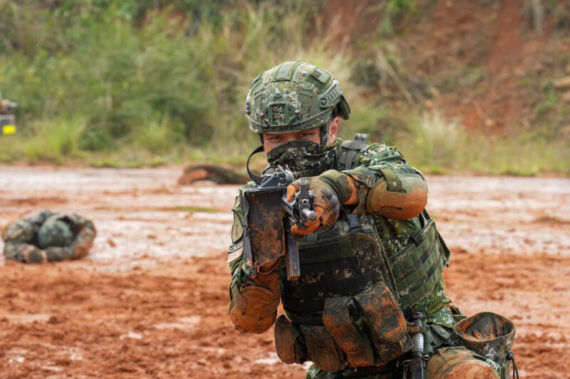 Soldiers attend the Taiwanese army special command training session at a camp base in Hsinchu, Taiwan on March 25, 2022. Photo by Anadolu Images.

n January 2023, experts at the Center for Strategic and International Studies (CSIS) revealed the results of the wargaming simulation report “The First Battle of the Next War: Wargaming a Chinese Invasion of Taiwan,” which was designed to analyze the possible scenarios of a Chinese “amphibious” invasion of Taiwan in 2026.

The CSIS simulations have generated striking findings. Among the 24 wargame reiterations, the United States, Taiwan, and Japan were able to defend against a conventional “amphibious” assault effectively, but at a high cost for all parties involved.

According to the report, the invasion consistently sparked off with a heavy Chinese bombardment that decimated Taiwan’s navy and air forces. The Chinese naval forces would surround the island of Taiwan while thousands of the People’s Liberation Army (PLA) soldiers cross the Taiwan Strait in both amphibious vessels and aircraft, with troops landing behind beachheads.

Read: “One China” Policy and Taiwan: The Island is on the World Agenda

The majority of the scenarios run by CSIS experts came to the conclusion that Taiwan was able to subjugate the Chinese forces, and the decisive factor in Taiwan’s victory was its people’s willingness to fight. “If Taiwan surrenders before U.S. forces can be brought to bear, the rest is futile,” the report revealed.

The report concluded that China’s strike on Japanese and American naval vessels cannot alter the outcome, which is that Taiwan remains autonomous despite Chinese attacks.

Eric Heginbotham, a security expert at the Massachusetts Institute of Technology (MIT) Center for International Studies, reported that two significant conclusions had been reached.

“First, under most circumstances, China is unlikely to succeed in its operational objectives or to occupy Taipei. Secondly, the cost of war would be high for all involved, certainly including the United States,” he stated.

Compared to the other forces, according to the report, China would suffer the most casualties by losing approximately 10,000 troops, 155 aircraft, 138 major ships, and having an estimated 30,000 Chinese soldiers captured on the island. Military experts at CSIS suggest that such a defeat, along with damages incurred by counterattacks in mainland territories, could endanger the stability of the ruling Chinese Communist Party (CCP).

Meanwhile, the U.S. and its allies would lose a significant number of ships, aircraft, and servicemembers, while Taiwan would experience an economic downfall. Additionally, the losses incurred by all sides would cause severe damage to the global position of the United States.

“The United States might win a pyrrhic victory, suffering more in the long run than the ‘defeated’ Chinese” as a result of the damage to Washington’s international standing, the report revealed.

CSIS experts cautioned that “the rival forces of the United States – such as Russia, North Korea or Iran – are preoccupied and might act aggressively to pursue their agendas which could weaken the U.S. military by incapacitating the forces to maintain the balance of power in Europe or the Middle East after the war.”

“To prevent war, the U.S. and its allies should reinforce their military deterrence capabilities,” they added.

Washington should bolster its military installations and collaborate with allies, particularly Japan, to secure additional bases. The CSIS report recommended that the U.S. should purchase more long-range missiles, specifically anti-ship missiles, as some supplies are critically low, according to the report.

According to base scenarios that excluded the most extreme outcomes, Taiwan’s air force would lose the majority of its 534 combat aircraft, and its navy would lose 38 major vessels. Taiwan’s army would also encounter around 3,500 casualties, with approximately one-third killed in combat in a local land battle.

CSIS military experts proposed that Taiwan officials adopt a “porcupine strategy,” which entails a smaller military using tactics intended to cause significant destruction to a larger adversary. The think tank experts suggested such an approach would include Taiwan’s deployment of more mobile anti-ship missiles.

The Taiwanese government should prioritize strengthening its ground forces rather than buying costly ships and aircraft that are easily targeted by adversaries, the experts further recommended.

To ensure success in defending Taiwan, CSIS experts identified four conditions that must be met. First, Taiwanese forces must “hold the line” and should not allow any room for Chinese expansion. The second condition necessitates the first condition to be met as the location of Taiwan disables the possibility of delivering supplies via an overland route. Under a possible attack, the Taiwanese military may possibly become confined to already-existing supplies until allied forces can resupply armament over the Pacific.

Third, Japan must allow the U.S. to launch combat operations from its soil. “The ability to operate from U.S. bases in Japan is so critical to U.S. success that it should be considered a sine qua non for intervention.”

Fourth, “the U.S. must have enough long-range weapons to strike China’s fleet from outside its defensive zone.” To strike from a vast distance effectively, the Taiwanese navy requires a greater number of long-range anti-ship cruise missiles and bombers, the experts concluded.