While the U.S. has yet to go so far as to recognize Taiwan as a separate country, China has recently accused the U.S. of covertly supporting the island’s full independence. 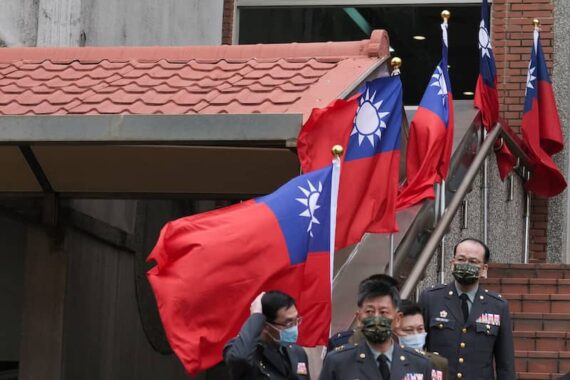 Nancy Pelosi, speaker of the United States House of Representatives, visited Taiwan on August 2, and met Taiwanese President Tsai Ing-wen. As the first visit by a senior U.S. official to Taiwan in 25 years, it was a historic event. The visit was followed online by millions of people, and, according to Flightradar24, flight name “SPAR19” became the most tracked flight of all times.

However, the surprise visit created a tense atmosphere and continues to trigger regional instability pushing certain countries to make statements about Taiwan’s status. Below we take a closer look at the “One China” policy and Taiwan’s political status.

China is the second-largest economy in the world and established itself as Asia’s major superpower. The country asserts that Taiwan is not a country independent from China.

Although the United States claims that it supports the “One China” policy, the tense atmosphere following Pelosi’s visit caused confusion.

While the U.S. has yet to go so far as to recognize Taiwan as a separate country, China has recently accused the U.S. of covertly supporting the island’s full independence. According to the statement made by the Ministry of Foreign Affairs of the People’s Republic of China after the visit, “This is a serious violation of the one-China principle and the provisions of the three China-U.S. joint communiqués. It has a severe impact on the political foundation of China-U.S. relations, and seriously infringes upon China’s sovereignty and territorial integrity.”

However, U.S. officials claim that they have not stopped supporting the “One China” policy despite President Biden’s promises of military equipment/support to Taiwan and regular visits by American lawmakers to the island. Even during Pelosi’s visit, National Security Council Coordinator for Strategic Communications John Kirby said that the U.S. is clear about the “One China” policy and does not support the independence of Taiwan.

He clarified further that the Biden administration has “been nothing but clear with the Chinese about where we stand on the issues and the One-China Policy and our support for a free and open Indo-Pacific.”

A quick glance at the history of Taiwan: “Two China” Era

The “One China” policy dates back to the Chinese Civil War, fought between the Nationalist Party (Kuomintang) led by Chiang Kai-shek and the Communist Party led by Mao Zedong, which lasted from 1945 to 1949. In 1949, the nationalists were defeated and withdrew to Taiwan, and the communists formed a government on the mainland. On October 1, 1949, the Chinese Communist Party, under the direction of Mao, proclaimed the establishment of the People’s Republic of China (PRC) in Beijing.

In December 1949, Chiang designated Taipei as the country’s “temporary capital,” claiming that the sovereignty of the Republic of China (ROC), which was established in 1912, continued in Taiwan.

Ever since the Taiwan government was established in 1949, both mainland China and Taiwan have asserted that they represent China in international organizations. At first, a few nations recognized the Taiwanese government, including the United States, and the Taiwan Republic of China served as China’s representative at the UN.

The debate over which government represents China at the UN remained up to 1971. However, the “Two China” era came to an end in 1971 when many nations voted mainland China into the UN General Assembly, instead of the Taiwanese government, as their preferred diplomatic partner.

After the UN vote, there were some developments in terms of Taiwan’s position.

Former U.S. President Richard Nixon’s 1972 trip to China marked a turning point in bilateral relations. Nixon’s visit was concluded by the signing of the Shanghai Communiqué, a diplomatic agreement between the two countries. The U.S. declared that the “United States acknowledges that all Chinese on either side of the Taiwan Strait maintain there is but one China and that Taiwan is a part of China.

The United States Government does not challenge that position. It reaffirms its interest in a peaceful settlement of the Taiwan question by the Chinese themselves. With this prospect in mind, it affirms the ultimate objective of the withdrawal of all U.S. forces and military installations from Taiwan.”

U.S.-China relations improved over time, and in 1978, due largely to Deng Xiaoping’s reforms, the Chinese economy started to open up to foreign competition.

The U.S., which has developed trade and diplomatic relations with China over the years, still maintains its contact with Taiwan. China became a member of the World Trade Organization (WTO) in 2001 and continued its rapid growth. Over the years, mutual economic dependence created by U.S. companies manufacturing their goods in China has led to trade imbalances. Bilateral relations were strained by the Trump era trade wars, diplomatic crises, and Trump famously referring to COVID-19 as the “Chinese virus.”

Additionally, the U.S. passed the Taiwan Relations Act in 2022 which is substantial in ensuring support for the island. The act effectuates U.S. support for Taiwan’s self-defense. Consequently, the U.S. has kept providing Taiwan with weapons. According to CNN, more than $1.1 billion in arms sales to Taiwan have been authorized by the Biden administration, a move that is likely to escalate the already high tensions between China and the United States. Up to 60 anti-ship missiles and up to 100 air-to-air missiles are among the proposed sales, which the administration formally informed Congress of on Friday, September 2.

China regards the Taiwan issue as its internal affair and tries to avoid any interference by other countries, urging them to respect China’s territorial integrity.

Following Pelosi’s visit to Taiwan, international organizations such as the UN, the Arab League, and countries such as Iran, Pakistan, Kyrgyzstan, the UAE, and North Korea repeated their support for the “One China” policy. Also, Russia reiterates the “One China” policy as Sergei Lavrov, the foreign minister of Russia, told reporters in Tashkent that “[o]ur position on the existence of only one China remains unchanged.” Lavrov added, “We have no problem with upholding the principle of China’s sovereignty.”

Furthermore, the G7 Foreign Ministers of Germany, Italy, Canada, Japan, France, the United Kingdom, the United States of America, and the High Representative of the European Union, reaffirmed that “there is no change in the respective One-China policies, where applicable, and basic positions on Taiwan of the G7 members.”

Despite China’s assertion that Taiwan is a part of the Chinese republic, Taiwan states that it is an “independent country.”

Taiwan’s international status and its formal unification with China remain a complex situation. Since many countries support mainland China and have adopted the “One China” policy, Taiwan’s position in the UN and other international organizations remains uncertain. Today, several countries maintain informal ties with Taiwan through representations, trade centers, or cultural institutions such as the Taipei Economic and Cultural Mission.